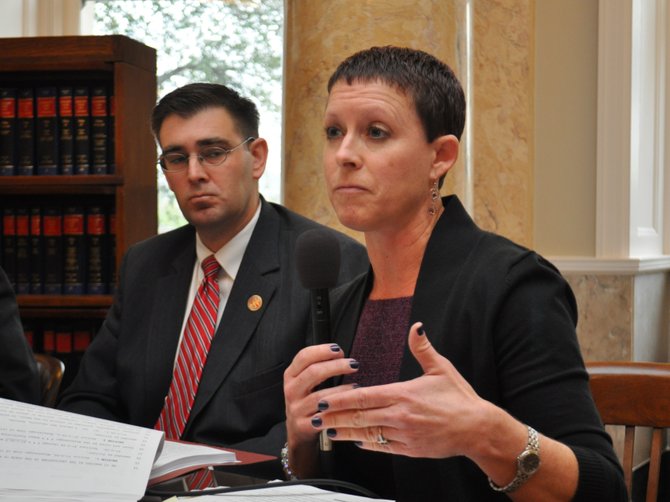 Trafficking of human beings--for sex or for labor--affects everyday people we all might encounter. It may be the woman who did your nails last week, who was lured with promises of a better life in America, or it could be your neighbor's daughter who was blackmailed with photos she doesn't want her parents to see.

Mississippi's law against human trafficking has undergone a major revision, thanks to the state Attorney General's office and other organizations that advocate for better protections for victims. Rep. Kimberly Buck, D-Jackson, introduced the bill, HB 673, the Mississippi Human Trafficking Act, to the House Judiciary B Committee this morning.

Sandy Middleton, executive director of the Pearl-based Center for Violence Protection, was on hand to watch the proceedings.

"We need to take care of some business," she said, referring to the state's currently weak protections for the victims of human trafficking in Mississippi. Neighboring states, including Louisiana and Alabama, already have much tougher laws against the crime.

The amendment clarifies who the perpetrators of human trafficking are--anyone who receives something of value from the act of trafficking--aimed at getting "the big person in charge," Buck said during the hearing. It substantially increases financial penalties and jail time, especially when victims are minor children. Persons convicted of trafficking minors can be jailed up to 30 years under the law, and pay a fine as high as $500,000 dollars.

The bill also adds penalties for businesses engaged in trafficking, based on laws aimed at enterprises connected with the illegal drug trade. Those companies could forfeit their assets or pay fines as high as $1 million. Trafficking victims are protected from prosecution under the new law.

Heather Wagner, director of the domestic-violence division of the state attorney general's office, is just one of the people in Mississippi who helped craft the language of the bill. Speaking to reporters after the hearing, she said her office had been working for a year to revamp and strengthen the bill. Wagner said she was "quite pleased" that the House committee passed the bill without much discussion.

Rep. David Baria, D-Bay St. Louis, introduced a handful of amendments including one that would direct half of all fines collected under the law to a victim's fund. Wagner said that he had discussed his amendments with her office prior to this morning's hearing.

The Senate Judiciary Committee will hold a hearing on a parallel Senate bill at 2 p.m. today.

Middleton said that human trafficking shares elements of power and control over victims with domestic violence. The Center for Violence Prevention has been a strong advocate and educator in Mississippi for domestic-violence and sexual-assault victims for many years. She and Wagner have often worked together to craft legislation protecting victims and stiffening legal remedies, in addition to educating law enforcement, prosecutors and judges.

Wagner emphasized that these are crimes that hit home.

"(Human trafficking) doesn't just happen in other parts of the world," she said. "It happens right here in Mississipppi."

UPDATE: The Senate bill also passed out of committee Feb. 5.