Wins for Women and Children 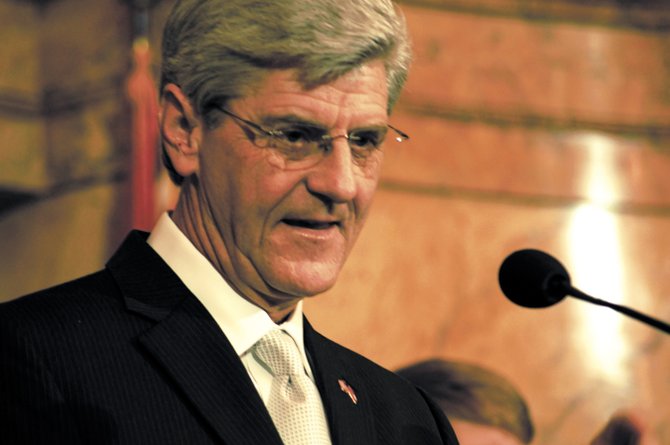 Gov. Phil Bryant is apparently the force behind a couple of bills helping women in Mississippi. Photo by R.L. Nave.

Women and children may be a little safer in Mississippi after some successes this past week at the state house.

One bill that is ready for Gov. Phil Bryant's signature is SB 2631, which will create a 26-member task force on domestic violence in the state.

"The governor really deserves all the credit for this," said Sandy Middleton, executive director of the Center for Violence Prevention in Rankin County.

Another bill Middleton identified as a win is HB 673, aka the Mississippi Human Trafficking Act, which has passed the House. The amendment to existing state law clarifies who the perpetrators of human trafficking are--anyone who receives something of value from the act of trafficking--and is aimed at getting "the big person in charge," bill sponsor Rep. Kimberly Buck, D-Jackson, said during a hearing to introduce the bill in February.

The bill substantially increases financial penalties and jail time for perpetrators, especially when victims are minor children. Persons convicted of trafficking minors can be jailed up to 30 years and pay a fine as high as $500,000 under the law.

The bill added penalties for businesses engaged in trafficking, based on laws aimed at enterprises connected with the illegal drug trade. Those companies could forfeit their assets or pay fines as high as $1 million. Trafficking victims are protected from prosecution under the new law.

Heather Wagner, director of the domestic-violence division of the state attorney general's office, is just one of the people in Mississippi who helped craft the language of the bill; her office worked for a year to revamp and strengthen the language.

"The heavy burden is on us to inform law enforcement and victim-services providers," Middleton said, referring to organizations like the CVP and to the attorney general's office. "If we can't do that, it won't do us any good."

Also nearing the legislative finish line is "Erin's Law," named for Erin Merryn, a young woman from Illinois. This bill creates a task force whose purpose is to create age-appropriate, evidence-based curriculum for Mississippi's school children from kindergarten through fifth grade designed to prevent sexual abuse by teaching children to recognize and report it. If passed, the curriculum would be ready for the 2015-2016 school year.

In Mississippi, Rep. Tom Miles, D-Forest, sponsored Erin's Law, and it is one of at least 10 such bills being introduced in state legislatures across the country this year.

"It's just something that's pushed under the rug a lot in Mississippi," he said in January. "... We want to make Mississippi the safest state for all children."

House Bill 151 would seem to have a similar goal; however, at least one women's advocate group believes it could do more harm than good. The bill is an amendment to current laws relating to sex crimes against minors. The changes direct physicians and midwives to collect fetal tissue from an abortion performed on a minor younger than 14, or collect umbilical cord blood if they deliver a baby from a girl who was younger than 16 when she conceived.

Those samples could be used by law enforcement to determine and prosecute the father for sex crimes.

Jamie Bardwell, director of programs at The Women's Fund in Jackson, says the push to pass the bill comes from Gov. Bryant's office, but the bill's author is Andy Gipson, R-Braxton.

"The governor believes that the main reason we have so much teen pregnancy in Mississippi is because of these older men preying on younger women," Bardwell said, but the statistics don't back this up. Bardwell said that there were 97 births in 2011 to women under 15 years old, 18 of those in Hinds County.

"This really brings up the question of: Is this really the problem?" she said, adding that the Women's Fund believes such a law is "really short-sighted." Sixty-six percent of teenage births are to older teens, 18 and 19-year-olds, she said.

While not an attorney, Bardwell brought up the issue of probable cause. Can law enforcement use cord blood as probable cause to test men in the community to determine fatherhood? Will prosecutors be able to use such evidence in court?

"I can imagine it's even unconstitutional," Bardwell said. "The means don't justify the ends."