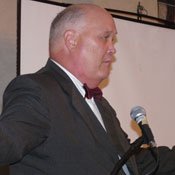 Director of the Stennis Institute of Government Marty Wiseman said the race for governor could be close.

Read Republican Bill Denny's mailout (PDF). In the final hours before Election Day, candidates for state offices are making the final push to win over voters and outpace their opponents.

The race for attorney general between Republican Steve Simpson and incumbent Democrat Jim Hood has been one of the most contentious races. Marty Wiseman, director of the Stennis Institute of Government, said his guess is "as good as anyone's" but predicts that Hood will pull through.

"Jim Hood is such a vote getter," Wiseman said. "He has proven that in election after election from the first time he won the attorney general's race (to) 2007 when Haley Barbour was on the ballot for governor, and Hood got more votes than any other candidate on the ballot."

Wiseman said Simpson has put up a tough fight, but Hood's success in previous elections will be a boost for him. The Clarion-Ledger also endorsed Hood on Nov. 3. The Jackson Free Press endorsed him last week. Public Policy Polling reported today that Hood is leading the race by a 52 to 39 margin.

"Simpson comes from a political family who knows how to win office," Wiseman said. "This is a challenge for Hood, but I think Hood will still persevere."

Hood's campaign spokesman, Jonathan Compretta, said that Hood would spend today at the attorney general's office preparing his staff for the elections. Hood's election-night party is at the King Edward on Tuesday after the polls close.

"He will work with his lawyers to make sure everything is going well with voting, and to see if there are any problems circuit clerks may have," Compretta said about Hood's schedule today.

Democratic governor hopeful Johnny DuPree will make several stops in Jackson today to gather support from voters. At 12:45 p.m. DuPree attended a rally at Jackson State University as well as a rally at Tougaloo College at 4 p.m. and Millsaps College at 7 p.m. He will also make a few stops north of Jackson and the Delta. Tomorrow, Dupree will host an election-night party at the convention center in Hattiesburg.

Wisemann said that, according to polls he has viewed, the governor's race might be closer than expected. Public Policy Polling reports that Bryant is leading the race by 14 points.

"With an African American candidate being a nominee of a major party for the first time, a massive black voter turn out could close that gap," Wiseman said. "DuPree is in shouting distance of having a shot of making it a horse race. Am I predicting that he is going to win? No. I am saying that (it) is certainly not impossible."

Bryant hosted a final "Get Out the Vote" rally Saturday with former Arkansas Gov. Mike Huckabee in Walls, Miss.

The District 64 House of Representatives race between Democrat Dorsey Carson and incumbent Republican Bill Denny has heated up over mailouts. Denny has sent out a mailout claiming that Carson's campaign is "bankrolled by trial lawyer special-interest groups who want to roll back common-sense tort reform."

This morning, Carson said he is not a trial lawyer and does not get support from them.

"Out of the $100,000 we have raised, less than 2 percent has come from special interests and that has come from the construction industry, nurses and educators," Carson said. "We have more than 400 individual contributors."

Carson also sent out a mailout that included pictures of him posing with Republicans such as U.S. Sens. Roger Wicker and Thad Cochran, as well as U.S. Navy Secretary Ray Mabus, a former Democratic governor of Mississippi. On the mailout, Carson states that he wouldn't let "bipartisan bickering get in the way of helping Northeast Jackson and the Reservoir Ridgeland." Denny sent out a response, claiming that Carson was misleading voters to think that he is a conservative.

Carson said he will spend today knocking on doors in his district and trying to sway any undecided voters. "We are going to do everything we can until the polls close to get the word out," he said.