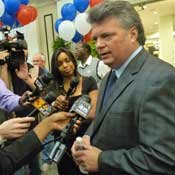 Instead, they mingled and helped themselves to a spread of coconut shrimp, prime rib and stuffed mushrooms. It was clear that Hood was going to win his third term with ease. By the time the Associated Press called the race around 9 p.m., the room was full of supporters in good spirits. Around 9:30 p.m., his Republican opponent Steve Simpson called to concede.

Today, the Associated Press reported that Hood has won the race so far with 61 percent of the vote while Simpson received 39 percent. So far, 1,818 precincts out of 1,876 have reported results.

At about 9:45 p.m., Hood arrived to thank his supporters. The majority of attendees were employees of the AG's office and seemed relieved to know that they would not need to find new jobs in January.

Hood kissed his mother who arrived at the party in a wheelchair and had undergone open-heart surgery just a few weeks earlier. Hood's wife, Debbie, and two children accompanied him on stage. The Democratic attorney general seemed more relaxed than he had been during previous interviews. As he tried to remember all the people he needed to thank, he threw out a few jokes.

He paused after acknowledging his brother Tom Hood who is also the executive director of the Mississippi Ethics Commission.   "I thought that with being on the Ethics Commission, he wasn't supposed to be here tonight," Hood joked.

The AG's race was one of the most contentious statewide races. Simpson, who served as former Department of Public Safety commissioner, challenged Hood at every turn--calling for public debates and demanding that Hood tell the public why he "refused" to join a multi-state lawsuit against federal health-care reform. (Hood said several times that joining the lawsuit was nothing more than a political statement and would be costly to the state).

Publicly, Hood did not acknowledge his opponent's challenges and chose to speak instead about his work fighting domestic violence and implementing a cyber-crime unit in his office. Hood, however, did air a commercial slamming his opponent for buying a yacht the same year he did not pay property taxes on his home, and for taking a pay raise as public safety commissioner when his department was experiencing budget cuts. During a JFP interview in September, Simpson defended his salary increase, saying it was part of his original salary arrangement with the state personnel board and took two years to go into effect. Hood's campaign manager, Jonathan Compretta, also confirmed earlier this week that the campaign had sent a mailout last week featuring a photograph of Steve Simpson wearing a toga at what appeared to be a party.

Last night, Hood defended the campaign when reporters asked about the barrage of attacks. He said he ran positive commercials until Simpson launched personal attacks; at that point, he decided to "fight back."

"Elections are tough, bare fisted brawls," he said. "They are distasteful for me. I don't enjoy the tough parts, but we have a duty to let the voters know the differences in the candidates."

Perhaps Hood's success in winning elections comes from his ability to relate to voters and communicate on their level.

"I think he is the last of the great populists in Mississippi," said Blake Tyler, a Jackson attorney who provides outside counsel for the AG's office. "He is conservative on certain issues, but he's still a Democrat."

John Arthur Eaves, who ran as a Democrat for governor against Gov. Haley Barbour in 2007, was also present at the party last night. He said that Hood's focus on protecting families has made him a savvy politician.

"He recognizes that protecting children and the most vulnerable in our society is a priority," Eaves said. "I think Mississippi voters ... don't always completely trust the Republican agenda, but they know that Jim Hood will be there to protect them."