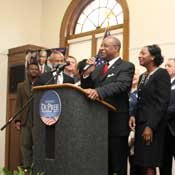 Johnny DuPree won the Democratic primary runoff for governor. Can he win the race in November? It hinges on turnout.

Hattiesburg Mayor Johnny DuPree proved that grass-roots organizing matters more than cash when it comes to winning the Democratic Party nomination for governor. Now, many voters are wondering about the likelihood of DuPree winning the governor's race against Republican Phil Bryant on Nov. 8.

On Aug. 23, DuPree beat Clarksdale businessman Bill Luckett in the primary runoff election for the Democratic Party spot on the November ballot. Luckett received more donations, but DuPree ran an aggressive, race-neutral campaign and poised himself as a people's politician with more than 20 years experience serving in government.

DuPree is the first black Mississippian since Reconstruction to win a major-party nomination for governor. In the Aug. 2 primary, DuPree had 4,000 more votes than Republican gubernatorial candidate Phil Bryant. But those numbers may not be an indication of DuPree's chances over Bryant. The majority of counties in Mississippi have a high number of Democratic candidates in local races, and because the state does not have open primaries, more voters vote in Democratic primaries than in the Republican primaries.

Marty Wiseman, director of the John C. Stennis Institute for Government at Mississippi State University, said that despite race, the chances for any Democrat to win the governor's race would be slim this election cycle.

"There are a lot of people out there will cast a Democratic vote, but the (Democratic) party structure is in disarray right now and mixed up with arguably the best Republican strategist we have ever had," Wisemann said, referring to Gov. Haley Barbour.

But DuPree's candidacy raises unknowns about the number of black voters who will turn out Nov. 8. "Everyone is going to know about DuPree before the election rolls around. If he can massively turn out the African American community and put together coalitions (to counter) some of these other (positions) the Republicans are taking. ... he might be able to get over the hump," Wisemann said.

"If you assume on Election Day that the African American turnout is between 25 and 28 percent, and then you assume the white turnout is 75 to 72 percent, then the Democratic nominee would need to get 38 or 39 percent of the white vote to win," Nash said.

Jackson State University political science professor D'Andra Orey said he doesn't think Republicans or Tea Party members will launch direct racial attacks, but will instead use "southern strategy" tactics of going after issues such as welfare. Orey said DuPree would be wise to focus on issues that affect lower-class whites such as jobs and the economy.

"The biggest challenge is to create a structure that would coalesce his base of African Americans with progressives and lower-class whites who typically vote on the Republican ticket," he said. "The Republicans have done a great job of using the southern strategy to divide lower class whites along the line of race."

Orey also said that the national attention DuPree received after the runoffs will help him get the name recognition he needs: "Clearly, he will need to obtain white crossover voting in the general election. The positive of that is that being the mayor of Hattiesburg and a native son of the area will allow him to possibly obtain votes where Democratic candidates may not have been as successful in the past."

Sam Hall, DuPree's campaign director, said 80 percent of voters who voted in the primary came back to the polls for the runoff, which is "unheard of." Hall said DuPree will focus on making government more efficient through technology and better management.

"What he has been able to do in Hattiesburg and the plans that he has laid out during this campaign I think speak to what people want most right now in this state," Hall said of the Democratic nominee.