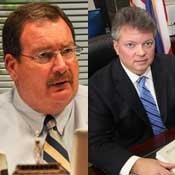 Mississippi Attorney General Jim Hood, a Democrat, and his Republican opponent Steve Simpson accused each other last week of conflicts of interest. On Monday, Sept. 12, Simpson held a press conference chiding Hood for waiting to file suit against BP and for spending $50,000 on gym memberships and Weight Watchers services for his employees. Weight Watchers and its executive have donated $2,000 to Hood's campaign.

In 2010, the Legislature passed SB 2646, which required the state to establish an employee wellness program. The program requires agencies to coordinate discounts with gym memberships and fitness centers across the state.

In July 2010, four months after the BP oil spill, Gov. Haley Barbour asked Hood to wait before filing suit against BP to not jeopardize the claims process. Simpson alleged Sept. 12 that Hood used the potential litigation to stock his war chest with donations from private attorneys in exchange for contracts when he finally decided to file suit. In July 2011, Hood filed suit against BP Claims Administrator Kenneth Feinberg for not paying claims to residents fast enough.

"Mr. Simpson is patently playing politics with this absurd charge. While Simpson has been a no-show on this issue, Jim Hood has led the effort to hold BP and Ken Feinberg accountable to (Gulf) Coast residents," Compretta said.

On Friday, Hood's re-election campaign accused Simpson of using his former position as commissioner of the Department of Public Safety to secure his consulting contract with a national driver's license kiosk company. In response to media inquiries about the contract, Compretta said that Simpson awarded a contract to L-1 Identity Solutions days before he stepped down as commissioner. Simpson extended the contract to $5.9 million so that L-1 could build 51 electronic kiosks in Mississippi.

"Every time a Mississippi motorist uses a state kiosk to renew his driver's license, he will put part of that fee into Steve Simpson's wallet," a statement from Compretta alleged in response to a Jackson Free Press inquiry.

Simpson said he signed the contract to work as a consultant for L-1 while conducting his campaign for attorney general in June. L-1 specializes in driver's licenses and license kiosks for Department of Motor Vehicles throughout the country, including Mississippi. "My agreement prohibits me from doing any work in Mississippi, since they were a vendor of DPS at the time I was commissioner. They both agreed that I should not do any work on behalf of the state," Simpson said, adding that if elected state attorney general, he would terminate his consulting contract with L-1.

His campaign manager, Scott Paradise, said Simpson signed the L-1 contract June 1, months after he resigned as Department of Public Safety commissioner Feb. 15. "They are trying to make it look like that Steve is giving this company millions of dollars, and now they hired him," Paradise said. "They aren't saying that (L-1) has had a contract since 2002, which is six years before Steve stepped foot in the public safety office."

Simpson renewed L-1's contract with the Department of Public Safety, however, 13 days before stepping down.

Paradise added that the agency renewed the contract several times, including in 2008 when Simpson served as commissioner. Paradise said he could not disclose Simpson's salary or provide a copy of the contract.

"If he wanted to do something in Mississippi, according to ethics opinions, there still would not be a conflict of interest," Paradise said. "But for the purpose of appearance, he said he's not comfortable doing anything in Mississippi."

Paradise referred to a 2001 ethics opinion stating that state employees can work for a company their former agency contracted with, as long as the employee's new job does not involve work with the state contract. Hood's campaign, however, pointed to a 2000 opinion supporting their accusations. "A former state employee accepting employment with a contractor of his former state agency is certainly a circumstance with the potential of creating suspicion among the public and reflecting unfavorably upon the state agency," it states.

The 2000 opinion states that a state agency or the Legislature must enact a policy or law that would prohibit government employees from accepting jobs with state contractors.

In response to Hood's criticism over the alleged conflict of interest, Simpson blasted Hood for hiring outside counsel to handle his office's litigation. Paradise claims that Hood received $112,350 in campaign donations from outside attorneys who received contracts with the Hood's office.

The attorney general's website states that its office handles more than 3,000 civil cases, and special attorneys general, who are full-time state employees, litigate 95 percent of those cases. The private attorneys that the office employs for the other cases work on a contingency-fee basis, which means that they are only paid in the event of a successful outcome for the state. Compretta said the majority of out-of-state firms approach the AG's office with potential litigation, and Hood then determines if the cases have merit and will benefit the state. The attorney general's website also makes public all active contingency-fee contracts.

"By hiring expert outside counsel, the attorney general's office has recovered over $500 million for Mississippi taxpayers from corporations who have overcharged Mississippi residents and businesses." Compretta said.

After Hood participated in the absurd ruling of the Elections Board to put O'Hara on the ballot in November - and as a candidate for Treasurer, eliminating all competition for Governor - he has no credibility, IMHO. Anyone who can call someone a legitimate party candidate when they tried to run under a different party the same election and for multiple positions in the same election is just... I don't know. I can't believe that I am probably going to vote for a Republican...