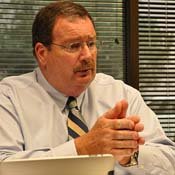 Mississippi Attorney General Candidate Steve Simpson is defending his current consulting work with a company his former agency awarded a contract to.

Attorney General Jim Hood's re-election campaign is accusing opponent Steve Simpson of using his former position as commissioner of the Mississippi Department of Public Safety to secure his current consulting contract with a national driver's license kiosk company. In response to media inquiries about the contract, Hood's re-election campaign manager Jonathan Compretta said that Simpson awarded a contract to L1 Identity Solutions days before he stepped down as commissioner.

"Every time a Mississippi motorist uses a state kiosk to renew his driver's license, he will put part of that fee into Steve Simpson's wallet," a statement from Compretta alleged today in response to a Jackson Free Press request for comment.

In an interview with the Jackson Free Press, yesterday, however, Simpson said he signed the contract to work as a consultant for L1 while conducting his campaign for attorney general in June. L1 specializes in driver's licenses and license kiosks for Department of Motor Vehicles throughout the country, including Mississippi.

"My agreement prohibits me from doing any work in Mississippi, since they were a vendor of DPS at the time I was commissioner. They both agreed that I should not do any work on behalf of the state," Simpson, a Republican, said yesterday.

Simpson added that if elected as attorney general, he would terminate his consulting contract with L1.

His campaign manager Scott Paradise said Simpson signed a contract June 1, which was months after resigning as Department of Public Safety Commissioner Feb. 15.

"They are trying to make it look like that Steve is giving this company millions of dollars, and now they hired him," Paradise said. "They aren't saying that (L1) has had a contract since 2002, which is six years before Steve stepped foot in the public safety office."

Paradise added that the agency renewed the contract several times, including in 2008 when Simpson served as commissioner. Paradise said he could not disclose Simpson's salary or provide a copy of the contract. "If he wanted to do something in Mississippi, according to ethics opinions, there still would not be a conflict of interest," Paradise said. "But for the purpose of appearance, he said he's not comfortable doing anything in Mississippi."

Department of Public Safety spokesman Jon Kahalar could not immediately confirm the dates that his agency signed and renewed contracts with L1. Representatives from L1 were not immediately available for comment.

Here is the full statement from Compretta: Steve Simpson being secretly hired by a company to which he awarded a state contract just days before he quit his job as commissioner of public safety is another example of how he used his position to line his own pockets at taxpayers’ expense. Steve Simpson’s continual pattern of skirting, and often thumbing his nose at the law raises serious character questions and points to a complete lack of credibility. Now, every time a Mississippi motorist uses a state kiosk to renew his driver’s license, he will put part of that fee into Steve Simpson’s wallet. Steve Simpson needs to answer serious questions---when did he first discuss being hired by this company and how much has he been paid. From spending more than $70,000 in taxpayer dollars to use the state plane as his personal taxi service to taking a state-owned RV to a NASCAR race and then wrecking it, Steve Simpson has used his position as a state official to benefit Steve Simpson. Any criticism Steve Simpson has of the Attorney General or of the operation of the Office of Attorney General cannot be taken seriously in the face of Mr. Simpson’s most recent and dubious actions.

The Clarion-Ledger followed Lacey's story about Simpson yesterday and included some new specifics about the contracts.