Etude of an Artist 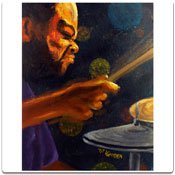 Visual and performing artist Lorenzo Gayden melds his love for jazz music into his passion for paintings and creates works. "Pushin' the Time."

When he was 5 years old, Lorenzo Gayden loved cars. He played with and drew them and, eventually, imagined designing them. But unlike most of us who abandon our childhood love for art, casting it off as simple doodling, Gayden, now 36, knew artistry was meant for him.

Well, sort of. He didn't take his art seriously until his senior year of high school. His goal was to have a career as an automobile designer, so on the advice of his high-school guidance counselor, the Jackson native majored in mechanical engineering at Mississippi State University.

Three years into his major, Gayden realized at an engineering field conference that his major would in no way lead to his goal: being as creative as possible.

After a four-year formal education hiatus, in 2001, Gayden enrolled at Jackson State University to study fine art. As a fine-arts major, he took classes during the day and played jazz trombone at night and on weekends.

The instrument became his by default. He was in the middle of an alphabetized list of instrument names for junior high band hopefuls. Most students coveted the saxophone, then drums and so on. Trombone was nowhere near the top of the list. The band instructor "basically shoved the trombone in front of me," Gayden says.

He wrestled with playing trombone and also learned to play the baritone, tuba and djembe (African drums), but the former turned out to be a fortuitous fit. In 1998, Gayden began to play professionally. Today, he plays in two bands: his own, Southern Komfort Brass Band; and he is part of a seven-piece ensemble along with young blues musician Jarekus Singleton, the Jarekus Singleton Band.

In 2008, Gayden opened the Swahili-named Sanaa Fine Art & Framing, Jackson's only African American-owned gallery, then in Fondren. The gallery has since moved to 440 Bounds St. Sanaa, which also serves as a framing shop and boutique, is still "alive and kicking," Gayden says, despite the economy's effect on business. Nevertheless, he's hosted an event or opening at least every two months.

Add to all this, Gayden still paints. His stretches out of the studio might last up to six months, but when he's in the studio, he's there. "Like up-all-night-for-days there," he says.

Mostly jazz inspires the artist's style. This is how he harmonizes his love of art and music. He almost always creates with music playing in the background.

"I find that my pieces have a different energy when I am listening to music. A lot of my technique is very rhythmic," he says. "The technical term for my style is expressionistic. I like to abstract backgrounds to give subliminal messages with the pieces."

Inspired by legends like J.J. Johnson, John Coltrane and Dizzy Gillespie, Gayden and his brush strokes meld with the tone and movement of the music that wafts through the air as he paints. Save for a portrait of folk singer Woody Guthrie, for instance, most of his art portrays specific jazz musicians or their likenesses. Gayden is careful about technical accuracy—what an instrument actually looks like, how a player holds one. But he veers slightly to the left, artistically, by using vibrant colors and form to capture the music's mood and what it evokes for him. His subjects bear intense facial expressions: furrowed brows, clenched jaws and gripping fists. You can almost feel the intensity of the moment.

Gayden breezily casts off the idea that managing all these endeavors might be too much for him, and he credits his iPhone for his ability to manage his time. He also admits to an ebb and flow of passions. His art or writing may suffer at the expense of his music (save for the occasional inspirational lightening strike), for example, or vice versa.

Considering his entrepreneurial side, Gayden knows this balance is necessary. As a result, he has laid down the pen of his poetry writing for now, but not before it served as a conduit for love. Gayden met Kiwana about 10 years ago at an open-mic poetry night at the former Seven*Studioz. The couple wed this past October.

If all this weren't enough to keep him busy, he recently added "instructor" to his list of duties. He gives trombone lessons as a guest teacher at Jackson Academy. And though he never ended up designing cars, Gayden never strayed too far from the artistic inclinations of his youth.

To learn more about Sanaa Fine Art & Framing and the artists represented there, visit the website at http://http://www.sanaagalleries.com or call 769-218-8289.

Fantastic article. It's flat wonderful to find out about a person whose dreams continue to define his every move. And he's in Jackson--hooray!