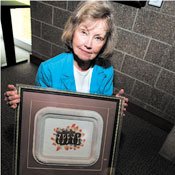 Gayle McCarty incorporates nature into art as does her son Lee McCarty. Their work in mixed-media and sculpture is on display at the Mississippi Library Commission through April 29.

She composed poetry on the backs of horses. He was a "wannabe cowboy." Sticks, rocks, earth and animals integrate the livelihood of mother Gayle and son Lee McCarty. Neither could conceive of existence that doesn't include being active in nature and working with their hands. Gayle, a mixed-media artist, and Lee, a ceramics artist, spin wilderness into their work. But as children, neither of the two, who share an exhibition at the Mississippi Library Commission this month, thought they could shape anything more than mud piles.

Gayle's father influenced her and her two sons--Lee and Davis--with the horses and mules he used to plow his three gardens. Creekside at the age of 5 or 6, Gayle would "mine clay," making sets of "dishes" and "food."

"I grew up spending most of my waking time outdoors: playing games, inventing things," Gayle says. "My love of nature has always been a powerful force in anything I have ever done."

In 1968, Gayle accompanied her husband Michael, a painter, to Mexico. While he pursued his master's of fine arts at Instituto Allende in San Miguel de Allende, Gayle tried to play the "normal housewife." With no TV, and minimal knowledge of Spanish, the radio didn't entertain her.

"I felt isolated, and needed more than just boiling water and going to the market," Gayle says. She signed up for a weaving course at the Instituto. For Gayle, it was love at first loom. Her hands were finally at work.

In 1970, back home in Mississippi, with her Mexican-built floor loom and deep impressions of Mexican colors and yarn, she and Michael lived off their art. Eventually Michael taught art at Delta State University, and Gayle took more classes.

"First time I sat out on the potter's wheel and threw a pot, I think I was transformed there. I loved the feel of the clay. It just seemed magical, and it was so much faster than weaving. I became a potter," Gayle says.

When Lee was in the second grade--a memory he doesn't really recall--he chomped at the bit to try weaving. Gayle says his first cardboard-loom enterprise, maroon and black with embedded sticks, as an "amazing piece."

To Lee's dismay, his weaving hung in Gayle's office at Hinds Community College where she worked as an instructor, department chairwoman, gallery director and district director of permanent collections for a total of 25 years.

Lee and his brother, Davis, immersed themselves in art at home and exhibitions. "They either had to hate it or love it," Gayle says.

Lee rejected art in his teen years. But the family definitely shared a love for the outdoors. Later, the boys rented pastures to ride in, and Lee spent time exploring in western states. They also skied, fished and hunted.

"There's nothing quite like watching (nature) at 5 o'clock in the morning from a deer stand ... and the woods just come alive. It's really exciting and inspiring, and it's something I think that I've carried with me," Lee says.

Lee, like his mother, works many forms of the natural world into his non-functional platters.

For the pure "pursuit of knowledge," Lee majored in philosophy at the University of Southern Mississippi. Then, at a fateful New Year's Eve party on the cusp of 2004, he boasted to a cute girl named Sarah, a former student of Gayle's, about being able to throw any of the pottery on display at that party. Since he'd "shot his mouth off," he had to make good on the promise. He ended up marrying Sarah in 2006.

Lee actually took a ceramics class or two in his undergrad days at Hinds. He found making ceramics simple and enjoyable.

"If you're not thinking about stuff, it's really, really easy. But now that I think about it, it's incredibly difficult," Lee says.

Access to supplies wasn't hard, though. Gayle had a wheel, and a ceramics supply store was nearby in Raymond. In his living room, Lee began throwing clay to cope with a dissatisfying job. He soon switched fields and now works toward a master of fine arts degree with an emphasis on ceramics at the University of Mississippi.

Gayle first incorporated skeletal matter into her art when she encountered an armadillo shell in the woods. "Like jewels!" she says. Since then, she has used a variety of animals, including "gifts" from students (sometimes in the form of road kill she could smell before arriving at her office door), the contents of a taxidermist's freezer and other natural objects. In contrast, she also uses industrial material such as roofing felt--partly as a protest against the high cost of artist supplies--as well as paint and copper.

Her work has transitioned from functional to non-functional weaving, and to pottery, sculpture and painting. Ultimately, she has woven it all into what she calls "mindscapes."

Layered with metaphor, "mindscapes" span landscapes, gender, relationships and emotions. "Who is She?" features the female goddess and centers around a handmade book with that title. In it, Gayle explores herself and the larger question of feminine roles, responsibilities and ideals.

For Gayle and Lee, the apple, as it were, rests contentedly under the tree.

"Everything about that cup is bad, but she loves it,"
Lee says.

Gayle and Lee McCarty's mixed-media and pottery exhibit continues through April 29 at the Mississippi Library Commission (3881 Eastwood Drive), from 8 a.m. to 5 p.m. Monday through Friday. For details, call 601-432-4056, or visit http://www.mlc.lib.ms.