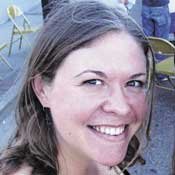 Wednesday, Oct. 26, marks the 40th day. The Occupy Wall Street protesters in Zuccotti Park and Mayor Michael Bloomberg have been playing tug-of-war for control of New York City's streets. And the wave has washed over the entire globe. That's right, even to Antarctica and right here in Jackson.

This is what a modern revolution looks like. "The book you're holding carries a message that your first instinct will be to distrust. That message is, we can change the world." So reads Kalle Lasn's "Culture Jam: The Uncooling of America," first published in 1999. Estonian-born, Canadian-dwelling Lasn is the guy behind the fusion of art and activism that is the Adbusters Media Foundation.

Through print media, video and Internet, Adbusters has been proponents of "culture jamming" for more than two decades, campaigning with the serious intent to infiltrate the mainstream against over-consumption and consumerism. The style is punchy and clever, also highly organized and strategized. Culture-jammer highlights include the promotion of "TV Turnoff Week" (Lasn has cited TV as a major mental-health problem) or "Buy Nothing Day" for the day after Thanksgiving rather than participation in the start of the holiday over-spending sprees.

While opposing over-reliance on TV, partially because of rampant advertising, obvious and covert, the Adbusters team realizes the functionality of working from within. They create "subvertising" for billboards and TV, pleas for paradigm shifts to our mental environments, and ask viewers—perhaps too aggressively sometimes, with frightening or disturbing images—to question their values. Though some of their anti-consumerism commercials never hit airwaves, the implications rippled and planted seeds.

True to its method of challenging the dominant economic, political and social regime, Adbusters launched "Occupy Wall Street" back in July. The Occupy Wall Street website says it's not directly affiliated with Adbusters, although the flint for the fire came from the magazine when it called for "20,000 people to flood into lower Manhattan, set up tents, kitchens, peaceful barricades and occupy Wall Street for a few months."

The Internet helped spread the word, but the inspired action came from elsewhere. American history already has instances of this sort, from Vietnam War protests to civil rights to art collectives. Occupy protesters and homeless people alike are shacking up in "tent cities." Citizens donate food, bedding and other amenities. Occupiers clean up after themselves, play drums and guitar, do yoga, paint signs.

But unrest and dissatisfaction aren't new. As a country, we've been quite perturbed about our military involvement in Iraq (which is now finally over?) and Afghanistan, and about perceived political misconduct in general. Why haven't people mobilized to this scale for other issues? In fact, they have, in a different zone of the spectrum with the Tea Party, for instance. Must be something in the air.

Now it's also called "Occupy Everything" and "Occupy Together." One critique of the revolution is for being too ambiguous or too broad in its complaints. Many want to know what the Occupiers want. Yet the movement has enormous support. The general ideology revolves around a critique of greed and economic corruption—tax breaks for the richest and bank bailouts—and outsourcing and loss of jobs. Famous folks are in on this, too, including artists, musicians, writers and some politicians, for that matter. Occupy Writers touts a list of supporters as long as the Magna Carta including Margaret Atwood, Neil Gaiman, Salman Rushdie and Alice Walker.

Occupiers are wearing costumes, too: "corporate zombies," people wearing masks from mainstream movies like "V for Vendetta" or "Scream," or big coin-head masks. Protesters are taping dollar bills over their mouths. Anything symbolic and subversive goes.

Occupy Wall Street even has its own printing press. When barred from using electronic microphones and amplification systems without a permit—in the aptly named Liberty Plaza—the Occupy participants didn't miss a beat. They spread the word like the foot soldiers they are: Hundreds of people—in unison—literally repeated the speakers' words, becoming "human megaphones."

The movement is swiftly evolving and taking on the character of its respective cities. Some places seem more playful, musical and whimsical. Others are more straight-up business, meeting and making points. Some cities report incidents of police brutality, though most arrests are peaceful if they happen at all.

In Jackson, folks have held "general assembly" meetings of about 50 to 100 people in Smith Park since mid-October. Last week, a smaller group protested in front of the University of Southern Mississippi in Hattiesburg, and another group has protested on the Coast. No matter the size, active and outspoken expression and support can unify.

In a sense, as wealthy and obese as our "super-powerful" country is, we are starving. Not just from radical economic imbalance, but for art and imagination. We are in the midst of newly recycled creative energy: opposition to the status quo, real voice and volume.

Class war isn't new, either, but in his book, Lasn prophetically stated that there is "growing discomfort for the gulf between the worlds of the rich and the poor."

Guess the discomfort coin has finally landed on its head.

Charlotte Blom lives and writes in Hattiesburg where she also teaches in a GED preparation program at the South Mississippi Planning and Development District.