‘Something to Think About' | Jackson Free Press | Jackson, MS

‘Something to Think About' 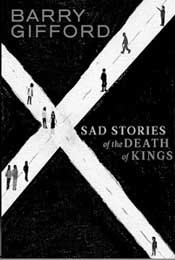 In Barry Gifford's "Sad Stories of the Death of Kings" (Seven Stories Press, 2010, $16.95), a book named after a line from a Shakespeare play, first-generation Austrian American Roy walks us through his Chicago neighborhood in the '60s. The short tales are from the perspective of a boy mostly from ages 11 to 15, punctuated by the author's sketch-portraits.

Roy spends a lot of time roaming around the city, mostly with nicknamed-boys his age or thereabouts, witnessing murders or maimings, and listening to stories of mafia men and hustlers alike. His relationship to females is that of a pubescent boy, admiring them only from a distance: on the big screen; through the halls of school or dancing on stage; or listening to friends boast about girls—cousins, in fact—bearing their breasts. Yet, he still holds his mother in the highest vein of beauty.

Moving from character depictions to dreams or experiences, Gifford's style is wry, and not too deeply involved with reflection other than undertones of irony. He seems to observe everything from an almost emotionless degree, but with humor. In "The Sultan," he describes a chess player and prizefighter who strategically never changes his expression.

"The Sultan played chess the way he fought, shyly, staying away until I made an improvident move, depending on impatience to provide him an opening so that he could sneak in a shot. Win or lose, The Sultan never stopped smiling."

Roy relies a lot on the gossip of his friends and family for information, as any good story teller does. And when many of the people in the book die one way or another, these occurrences never seem to leave Roy grief stricken, not even befuddled, no matter how brutal, bizarre or sad the means of death. If Roy is actually Barry Gifford, and the book an amalgamation of memoir and fiction, then we are getting a retrospective scarred over with adult understanding.

"Sad Stories of the Death of Kings" deals with race, ethnicity, religion, gender, status and broken homes. Many of the stories are peppered with '50s and '60s Hollywood-gangster slang or street lingo like "wise guys" and "broads."

Gifford abruptly ends his stories mostly without a point; they just kind of walk off the page. In "Innamorato," Roy and his mother go to see a European flick and talk about it afterward. His mother says she likes that "they don't always tie the story up neatly and explain everything. They leave you with something to think about." Much like the stories in this book.