'Everywhere With Roy Lewis': Historical Moments and the Everyday Lives of Black People 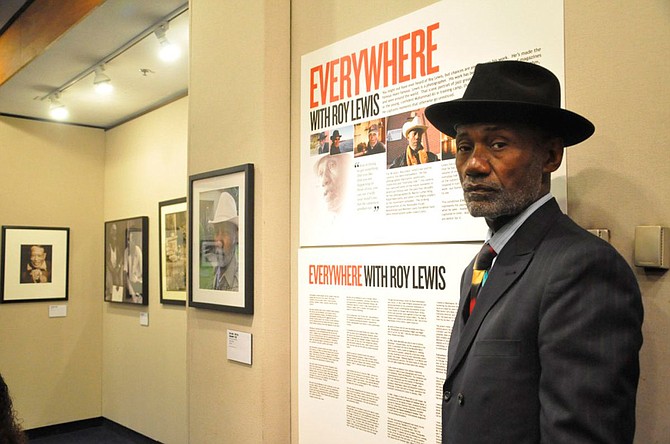 Some of photographer Roy Lewis' best work decks the walls of Jackson State University's Johnson Hall Art Gallery. A black-and-white portrait of Duke Ellington hangs on the left wall. On the back wall sits a black-and-white photo of Myrlie Evers and her three children sitting on a couch following the death of her husband, Medgar Evers. Evers' expression is somber as she faces the camera.

People can view these photos at the "Everywhere with Roy Lewis" exhibition at JSU. The gallery features photographs from Lewis' career, including historical moments and the everyday lives of black people. Redell Hearn, curator of arts and civil rights for Tougaloo College and the Mississippi Museum of Art, and Mark Geil, associate professor of art and photography at JSU, hosted a conversation with the community about the exhibit on June 6. Roy Lewis did not attend the event.

"It is a remarkable reflection of his life and career as a photographer over the past six decades of work he's been doing," Robert Luckett, director of the Margaret Walker Center, said at the event.

Hearn said she views the exhibit as a "gentle reminder" of black culture and what it means to be black.

"What it is, is a mix of things. It's family. It's aging. It's celebration. It's music. It is black power. You see some protest, and you see some resistance, but that's just a fraction of it," she said. "And the way he's embedded it into this comprehensive look is what's so beautiful about it."

Lewis was born July 24, 1937, in Natchez, Miss. In 1940, his family moved from Shieldsboro Plantation to the Oakland Plantation. Shortly afterward, his mother, Elizabeth Lewis, died from tuberculosis, leaving behind Roy Lewis and his six siblings. Lewis said her last message to the family was to stay together, a sentiment that would influence his photography later on in life.

His father was a sharecropper, and Lewis' maternal grandparents raised him. After graduating from Sadie V. Thompson High School in Natchez, he moved to Chicago with relatives. There, he landed a job in the subscription department at Johnson Publishing. He was drafted into the army in 1960. While he was a soldier, he developed his talent for photography and purchased his first camera, 35mm, for $25. He took photos of his soldiers and his friends. In 1961, he married Marmel Robinson and a year later, he was discharged from the army.

He returned to Johnson Publishing; however, his career got started after JET magazine published his photo of Thelonious Monk, a jazz musician. In 1966, he returned to Mississippi after James Meredith had been shot, and he photographed the March Against Fear. He left Johnson Publishing in 1968 and taught in the film department at Northeastern Illinois University.

Lewis filmed an interview with Elijah Muhammad, which was featured in the film "A Nation of Common Sense." In 1974, he flew to Zaire to film "The Rumble in the Jungle" fight between Muhammad Ali and George Foreman. A still shot of Ali leaning against the ropes to dodge Foreman's punch hangs on the wall of the exhibit at Johnson Hall. The film "When We Were Kings" features footage from this fight.

In 1975, he began work on "River Road on Mississippi," a pictorial book highlighting African American people, life and culture along the Mississippi River. He also contributed to the 1995 photo book project, "Song of My People," and that year, he published a book on the Million Man March, a gathering of more than 830,000 black men at the National Mall in Washington, D.C., to encourage black unity. He also filmed Poet Laureate Gwendolyn Brooks in 1969 for documentary "Riding and Striding, Reading and Teaching: A Short Day in the Life of Gwendolyn Brooks." The Poetry Foundation screened the film in June 2017.

"The purpose of 'Everywhere' is for me to select for display what I think to be my best work," Lewis said in the exhibit's description.