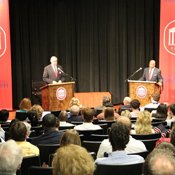 Mississippi's two leading Democratic gubernatorial candidates found much to agree on yesterday during their first one-on-one debate. Clarksdale attorney and businessman Bill Luckett and Hattiesburg Mayor Johnny DuPree both touted education as the key to the state's long-term economic success and promised support for small businesses to spur job creation.

"The best jobs program is a great education," Luckett said.

DuPree used the debate as an opportunity to unveil an education tax-break proposal for teachers and parents. Calling it the first step in his "Mississippi Education Restructuring Program," DuPree proposed exempting teachers with three or more years of experience from state income taxes, which he says would amount to an average of $2,000 in savings per teacher. He also proposed giving parents a $50-dollar tax rebate per child to pay for school supplies.

These measures would compensate for unfulfilled promises by the state Legislature to bring teacher salaries in the state closer to the regional average and to fund the state Educational Enhancement Fund, which provides teachers with extra money for student supplies, DuPree argued.

The state has money to cover these tax breaks, DuPree said, pointing to a $62 million revenue surplus from last fiscal year. However, he said, state agencies must begin budgeting three years in advance, instead of the usual one.

Luckett focused on early childhood education, which he said was Mississippi's best hope for economic growth in the long term. Citing the example of Mississippi Building Blocks, a privately-financed pilot program for early-childhood education, Luckett argued that the state could support a pre-kindergarten system without spending more money by partnering with private-sector and community groups.

"We can't strain an already stretched budget," he said.

Both candidates expressed their strong support for small business, which both called the "backbone" of the state's economy. Luckett said that he wanted to help small businesses grow by facilitating and guaranteeing loans. DuPree noted that 80 percent of Mississippi corporations pay no state income tax and said that he wants to close corporate tax loopholes. While the state grants some companies tax breaks for agreeing to certain investments in the state, such as employment, DuPree said that he wants to review all such agreements to make sure companies are complying.

The candidates both expressed their opposition to the state's current requirement that Medicaid beneficiaries travel to Jackson once a year to reapply for eligibility in person. The requirement, a signature reform of Gov. Haley Barbour, does little to eliminate Medicaid fraud and keeps thousands of needy Mississippians from receiving benefits, they said.

"I know there are some people on Medicaid who are taking advantage of the system, but the vast majority need it," DuPree said.

"I don't see the evidence of sufficient fraud to justify the face-to-face requirement," Luckett agreed.

The two also hold similar views on the three ballot initiatives voters will consider on the Nov. 8 general election. Both support a constitutional amendment to bar the use of eminent domain for the transfer of private property to a private developer or project. They also both support the "personhood" amendment, which would define human life as beginning at conception. Neither supports an amendment requiring voter identification.

"Voter ID is not going to stop voter fraud," DuPree said. "You know where we get voter fraud? Vote buying, absentee voting and voter assistance."

Luckett said he was not convinced that voter fraud was a widespread problem and worried about possibly discriminatory effects. He emphasized, however, that if he were elected and the ID requirement passed, he would make sure that it did not prevent people from voting legally.

The major distinction Luckett and DuPree drew between themselves was in their backgrounds. Luckett, who has never held political office before, pointed to his private-sector experience, especially as a real-estate developer in Clarksdale. His projects, which include the Ground Zero Blues Club and Madidi Restaurant--joint ventures with actor Morgan Freeman--are "helping to revitalize a small town many had written off," he said.

DuPree, who has also worked in real estate, cast himself as an administrator, familiar with the workings of local government from his time as a Forrest County supervisor and his three terms as Hattiesburg's mayor. He pointed to Hattiesburg's burgeoning population of professionals in their 20s and public-health successes like a city-wide anti-smoking ordinance and pedestrian-friendly streets as evidence of his ability to bring diverse groups of people together.

"We have a distinction of putting people around the table," DuPree said.

University of Mississippi marketing professor Kathy Wachter attended the debate and found little to differentiate the two candidates' platform. The real test of either candidates' mettle will be in governing and working with Republican legislators, though, she said.

It's great to have our now Oxford-based correspondent Ward Schaefer back in the JFP!

Disappointing that both candidates support the personhood amendment, something that, if passed will get struck down by the feds and further placing MS in the mode of a state that continues to come 50 years too late on the social issues. Seems like a nod to the so called "conservative" base in MS (though I like Dupree's raising of the issue of corporate taxes in MS, something that needs to be the cornerstone of his campaign). When will a democrat in MS run as a progressive? If everyone runs as a social conservative, then what is the point of fielding a Democratic candidate? There seems to be no real choice in MS politics, that hurts the state more than anything.