Democratic Candidates on the Road Again 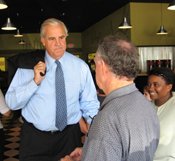 Democratic candidate for governor Bill Luckett talks with people at Basil's of Belhaven while campaigning for the primary runoff election Aug. 23.

With a runoff election only three short weeks away, Mississippi's Democratic candidates for governor are losing no time in continuing their campaigns.

Bill Luckett, Clarksdale attorney and businessman, and Hattiesburg Mayor Johnny DuPree will face a runoff election Aug. 23 after neither candidate was able to get a majority of the votes in Tuesday's primary for a clear win. Luckett was in Jackson Wednesday at McDade's Market and Basil's on Fortification Street.

"I'm not taking a break. I'm not slowing up a bit," he said during his lunch-hour stop at Basil's. "I'm going straight into it, and I'm going to continue exposing Phil Bryant for what he is and just work myself as hard as I can."

Throughout the campaign, Luckett tended to attack Lt. Gov. Phil Bryant, who won the Republican primary, rather than his Democratic opponent DuPree. Luckett indicated that he would not change his tactics in the weeks before he faces DuPree again in the runoff election.

"I'm going to keep exposing Phil Bryant for what he is," he said. "That's my plan."

A "Left Leaners'" lunch filled a few long tables toward the back of Basil's. Luckett had ample support from some of the people there, including Rickey Cole, former chairman of the Mississippi Democratic Party, who said the runoff election was not a surprise to him. He was pleased at how many people voted in the Democratic primary.

"I actually was one of the few that predicted this," he said. "In a race where there are more than three candidates, it's hard to get one person to get an outright majority unless they just spend huge amounts of money like Phil Bryant did."

Some at the lunch who supported DuPree or other candidates were quick to emphasize that this was not a Luckett event. They were glad to hand out campaign information or talk about the platforms of other candidates.

"I don't think he needs to do anything differently, he just needs to maintain the campaign he is running," she said.

DuPree was in Hattiesburg Wednesday attending to city business, campaign manager Sam Hall said, but had events planned for the evening and later in the week. Hall said the campaign is happy about the good voter turnout and DuPree's lead, as well as the fact that DuPree received the most votes of any candidate for governor from any party. He said the two other Democratic candidates, Guy Dale Shaw and Bill Compton Jr., called election night to pledge their support and endorsements to DuPree.

Reform Party candidate for governor Bobby Kearan was also at the Left Leaners' lunch. He said Mississippi needs "instant runoff" elections, in which voters rank candidates in order of preference. Those rankings are used to determine a winner if no one gets a clear majority, which Kearan said would avoid the expense of a runoff election.