Democrats: The Mayor or the Businessman? 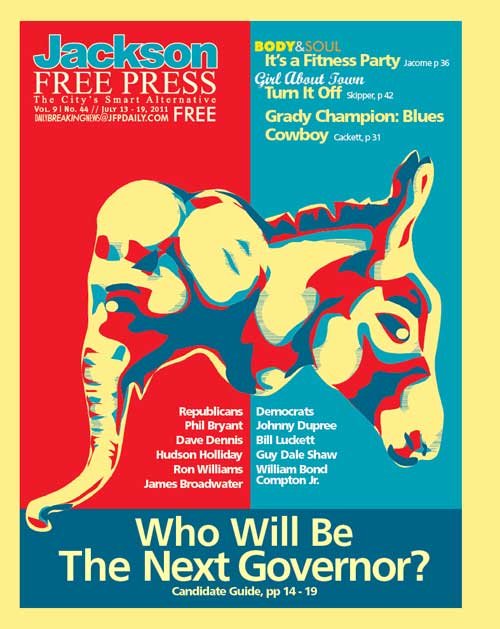 Bill Luckett and Johnny DuPree, Democratic candidates for governor in Mississippi, resembled long-time acquaintances more than they did political opponents during a debate at the University of Mississippi July 6.

With the primary less than three weeks away, the candidates shared much ground. Both are proponents of fully funding education, requiring the state to make early childhood education available to all children and creating more job opportunities to boost the state's weak economy.

The candidates also show conservative sides—they both support a "personhood" initiative on the state's Nov. 8 ballot that would define human life in the state's Constitution as beginning at conception.

But when it comes to their backgrounds, the two candidates have their share of differences.

Luckett (full interview), who hails from Clarksdale, is an attorney by training but his real passion lies in revitalization. He often cites Ground Zero Blues Club and Madidi Restaurant—two ventures he co-owns with actor Morgan Freeman—as successful fruits of his efforts to improve Clarksdale. The 62-year-old doesn't mind getting his hands dirty. He often spends his Saturdays donating labor to projects in his city such as renovating historic structures or cleaning up parks and public streets. Luckett served on Clarksdale's beautificatioan committee, its airport board and its planning committee. He graduated in the top of his brigade during military training and commanded an engineering unit in Charleston, S.C., in the 1980s.

DuPree (full interview), on the other hand, is familiar with the inner workings of government. In 2001, the 57-year-old became the first black mayor of Hattiesburg. His other government stints include serving as a board member for Hattiesburg Public Schools and as a Forrest County supervisor. The Fort Benning, Ga., native also has a business streak—he worked for Sears for 15 years in the 1980s and started his own real estate firm with his wife, Johnniece, in 1988.

DuPree, however, wants to convince voters that he doesn't play political games to benefit his own interest. He grew up poor, and his mother was illiterate. His life experiences have inspired him to help disadvantaged people, he said.

"I'm not a politician, I'm a public servant," DuPree said at a campaign event in Jackson July 5.

Luckett sees his experiences in the private sector as an advantage—he isn't a part of business-as-usual politics. Luckett's message implies that bureaucracy will not get in the way of his vision.

"I'm not a career politician," Luckett said. "I am largely in the private sector as a job creator."

The Education and Jobs Factor
Getting a state-funded early childhood education program is not going to be an easy task.

Both candidates believe that the state can partner with private organizations like the Boys and Girls Club to teach preschool-age children with the proper curriculum.

During the debate at Ole Miss July 6, DuPree unveiled his "Mississippi Education Restructuring Plan" that would exempt teachers with three or more years experience from paying state income taxes, which he estimates would amount to an average of $2,000 in savings per teacher. He wants to give parents a $50-dollar tax rebate per child to pay for school supplies. DuPree would require the state to make education budget projections three years in advance instead of one year in advance.

The Democrats have a difference in opinion when it comes to charter schools. DuPree does not believe state funds should be used for charter schools. He wants to focus on improving public schools rather than taking money out of them, he said. In a February 2011 JFP interview, Luckett said he embraced the concept of charter schools after seeing the success of a KIPP (Knowledge is Power Program) charter school in Helena., Ark. In a four-year period, students went from being in the bottom percentile of national test scores to within the top 20 percentile.

Both candidates want to create more incentives and opportunities for small businesses. DuPree has repeatedly demanded that corporations in Mississippi pay their fair share of taxes, and said he wants to review all agreements the state has given exempting them from paying state income tax.

Luckett and DuPree both support a constitutional amendment scheduled to appear on the Nov. 8 state ballot to ban using eminent domain to transfer private property to a private developer or corporation. They also oppose a ballot initiative requiring voter identification.

Getting the Vote
DuPree showed up at the "Women for DuPree Rally" July 5 at his Jackson headquarters on State Street in a gray suit and apologized to the group of approximately 30 women for not wearing a tie. Prior to the rally, he was at a debate, and his pink tie caught the attention of a man there. When the man complimented DuPree on his attire, the mayor took off his tie and handed it to the man.

DuPree used that example to demonstrate what extremes he will go to to help his constituents.

"If we can bless someone with something, I have learned that the material things are only as important as you make them," he said. "I try to keep things in perspective. I like to make people happy—it feels better to me than I know how to explain."

During the rally, DuPree answered questions from women and a few men and gave out doors prizes such as T-shirts and posters. A woman who won a "DuPree for Governor" poster squealed with delight when her ticket number was called.

"I'm going to put this next to my Obama poster," she said enthusiastically.

Luckett's campaign ads often depict him with younger Mississippians, who are smiling and eagerly receiving diplomas. His buddy Morgan Freeman often appears by Luckett's side in those ads.

Luckett said he is trying to appeal to the all state's demographics but doesn't deny that he resonates with more youthful Democrats who understand his passion for providing more opportunities to younger generations.

In January 2010, Luckett signed a lease for an apartment in Jackson's recently renovated King Edward Hotel. Although he doesn't spend much time there these days, he still has the apartment. By renting an apartment in King Edward, Luckett says he has already invested in Jackson and he hopes to turn the tides of a decades-long stand off between the state Legislature and the Capital City.

"When state government is occupying ... 30 or 40 percent of land mass in downtown Jackson, those entities are tax free but getting services, using streets, getting police protection," he told the Jackson Free Press.

"I think the Legislature needs to look long and hard. That is our Capital city. Often, it's the first place visitors see when they come to Mississippi. I believe there needs to be further support given by state government (to the city). I hope that's something I can convince the Legislature to do."

Both candidates fall behind in donations compared to Republican candidate Phil Bryant and haven't been as visible in television ads. Because of this, political analyst and author Jere Nash said that the majority of voters might not recognize the candidates.

"It's a crapshoot," Nash said about which candidate is likely to win the primary race.

Nash said whichever candidate emerges from the Democratic primary will run as an underdog to the Republican candidate in the state, Nash said.

"I don't think the issue is black or white," Nash said. "It's Democrat or Republican. It's very difficult for a Democrat to get elected statewide in Mississippi."

D'Andra Orey, political science professor at Jackson State University, said that race would play a role in the election.

"I think that as it relates to racial black voting, DuPree would clearly will get an overwhelming support from African Americans after being endorsed by Congressman Benny Thompson. And I think that Luckett might get a sizable percentage of white voters at the Democratic level," Orey said. "Some voters—not restricted to white—may perceive DuPree as not being a viable candidate because of the racial polarization that exists in the state."