Searching for Dems at the Fair 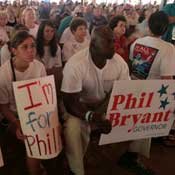 It was clear he wasn't preaching to the choir. As he spoke about education reform, the audience talked among themselves while the media stood idly in front of the stage. A few DuPree supporters stood at the edge of the Founders' Square pavilion holding signs.

No one raised their hands—possibly because they weren't listening.

The majority of Democratic candidates shied away from social issues and played up their strengths in economic development, job creation and education. Luckett went as far as bringing a tool belt on stage with him as he talked about his efforts revitalizing Clarksdale.

The audience abstained from heckling the Democrats, which is a step up from past years. Bryant and Barbour, however, appeared to have rock-star status and received a standing ovation. The crowd chanted and stood up, waving their signs as Bryant took the stage.

Moran, who is running as the only Democrat for state treasurer, highlighted her background recruiting new business and industry to the state when she worked for the Mississippi Development Authority and rebuilding her town after Hurricane Katrina. "As a Democrat, we seem to be outnumbered," Moran told the Jackson Free Press. "We joke around and say it's the Republican Woodstock."

The cabins of former Democratic Secretary of State Dick Molpus and former state senator Gloria Williamson provided a safe haven for Democrats. On July 27 she held a luncheon for Hood. More than 200 came.

"People often come across our cabin and stop and are surprised," Williamson said.

After giving his speech, Luckett attended a Yates Construction luncheon where he networked with the mix of Republican and Democratic business leaders. At one point, a man from Scott County approached Luckett and told him that he supported Dave Dennis for governor, but since his county's races were predominately Democratic, he would vote for Luckett in the primary.

"Dave and I have very similar backgrounds," Luckett told the man. "We are job creators, and we want to do what's best for the state and stop cronyism. ... Dave and I both got into this race for the same reason: We do not want Phil Bryant running this state."

Democrats were once the majority in the state. When people at the fair were asked what changed, they simply said: "Ronald Reagan."

Reagan's historic speech at the 1980 fair focused largely on "state rights"—a historic code word for segregation. His speech is notorious as a "southern strategy" speech in a county with a violent race past.

Philadelphia resident Mildred Estes, wore a T-shirt supporting Bryant. She and her husband, Eric, will vote in the Democratic primary because the majority of candidates running for office in Neshoba County are Democrats. Mildred says it doesn't bother her that she can't vote for Bryant in the primary because she knows enough people support him and he'll make it through.

Her husband, Eric Estes, is more reticent about which candidate he supports for governor. "I am not a Republican," Eric Estes claimed. "I always vote for the right man, and it just happens that he's been a Republican every time."