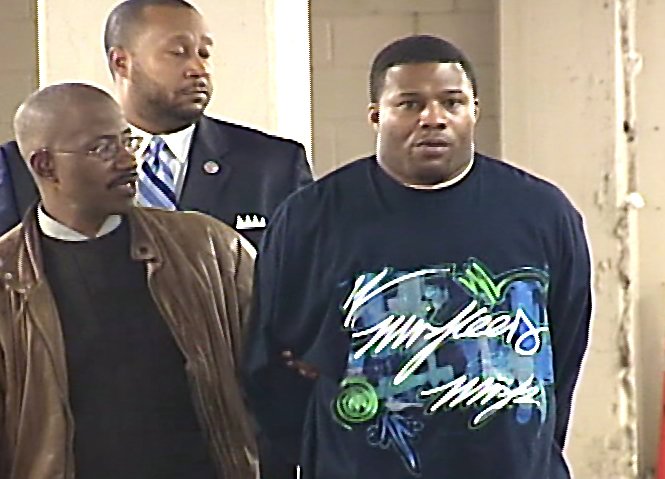 Sharrod Moore (right) is in jail awaiting trial for the murder of R.J. Washington. Photo by Courtesy WLBT

The attorney for Sharrod Moore, who is awaiting his Sept. 15 trial for the Nov. 14, 1995, murder of Jackson police officer Robert J. Washington, is accusing Hinds County District Attorney Robert S. Smith of "prosecutorial misconduct." Smith, they say, used "perjured" witness accounts to get the indictment, has not provided timely discovery documents and alleged a police "cover-up" in the case in a Jackson Free Press interview in May.

A grand jury indicted Moore in January for the 12-year-old murder, three months after his release on probation for two manslaughter deaths in 1996.

In a June 2, 2008, motion to dismiss, Chuck Mullins, who has served as Moore's appointed attorney through numerous cases, argued that Smith knew that a supposed witness statement by Shawn Burton to police officers Kenneth West and Gerald Jones was false.

On Nov. 9, 2007, in an interview at Parchman, police say Burton told them that Tiffany Mangum picked up Moore and Larry "Chicago" Nelson Jr. from Battlefield Park after Washington's death. Burton claimed then that Moore gave him and Terry "Dirt" Curtis a gun and a bloody rag, which they hid behind the Kentwood building on Cole Road in Ridgeland, 20 to 30 feet underground.

Later the same day of the interview, Mullins said Burton wrote to Officer Jones, indicating he wanted to "come clean." He said he did not, in fact, pick up Moore and Nelson and that a different woman, Cynthia Rene Bingham, picked them up.

In a follow-up interview with police, Burton said that Bingham had given him the murder weapon, which Moore supposedly had given her. Burton said then that he buried the gun near the Kentwood building, but not in the same place he said the first time. He gave officers a hand-drawn map, but when they searched the area, they found no weapon.

Mullins points out that no witness has supported either version of Burton's storynot Curtis, Bingham or even Stephan Hickman, who gave a deposition (which included allegations about now-Mayor Frank Melton being involved with the drug trade and with Washington) to prosecutors in March. Smith released the deposition to Moore's case file, an unusual move for a deposition transcript. In it, Hickmanwho is awaiting trial for a separate murder and robberytold Smith that he, Nelson and Burton witnessed Moore kill Washington, adding an additional wrinkle considering that Burton never said he had witnessed the murder.

Yet, Burton's incarceration records show that he was in the Central Mississippi Correctional Facility in Rankin County when the murder occurred. Hickman's mother later signed an affidavit saying Hickman was in the Hinds County Youth Detention Center at the time of the murder. Larry Nelson Sr. also says that his son, who was killed in an unsolved murder last year, was in the youth detention center at the time of Washington's murder.

The youth-detention alibis are compelling, but less convincing considering the ease with which some juvenile detainees were allowed to leave and be taken from the detention center in the '90s, Smith says.

Even Officer Washington himself had expressed concern to superiors about the apparent revolving youth-detention door in the '90s in a Sept. 3, 1993, memo he wrote about a meeting he had with Melton on Aug. 25, 1993, when Melton had flagged him down and told the officer he was aware that JPD was investigating him for earlier allegations.

Washington wrote in the memo that he knew young drug dealers who had lived with Melton, and had asked them many questions about where they got their cars and money; why they were selling drugs on a corner and who they were working for; how they had gotten out of jail when he (Washington) put them in for auto theft; why Melton adopted them; and what they were doing for him.

"Now when asking questions to them about Frank they would not give me a yes or no answer most of them would just say, nothing (sic)," Washington wrote then.

Still, records show that all the young men were incarcerated at the time of Washington's murder. "Of course, it is well-settled that the State is prohibited from utilizing this false evidence at trial," Mullins states in the June 2 motion to dismiss.

Smith told the Jackson Free Press Tuesday that his case will prove that Moore was the killer, despite the conflicting alibis. "The district attorney's office has carefully and meticulously gone through many, many documents and many, many witnesses, and we are more than confident about our case against Sharrod Moore."

Mullins makes particular hay "that Burton admitted he lied about picking up Mr. Moore and Nelson, yet the officers left this lie in the Underlying Fact and Circumstances." (Emphasis in the motion) He wants the motion to be dismissed with prejudice due to what he called "emotionally charged lies."

Smith fired back at the "lies" accusation. "Number one, he can argue before the jury that it's a lie that Sharrod Moore killed R.J. Washington, that the evidence and witnesses we present are all lies," he said of Mullins, adding that it makes no sense to allege "prosecutorial misconduct" at this stage based on the witnesses that have come forward. "He can attack their credibility at trial. We're not basing our case on one witness. He would have to argue that our whole case is a line, and Sharrod Moore didn't do one thing."

In the motion, Mullins argued that Moore has served enough time and needs to go free: "Mr. Moore has been prejudiced by the indictment already. Not only has he been falsely accused of committing this offense but he had his parole revoked. Mr. Moore was in jail from August 1996 until he was released in October 2007."

Moore was actually out of jail for a period starting in late 1997, however. He had been held for months without bond for the Aug. 31, 1996, murders and robbery of Mary Donaldson and Samuel King, both in their 60s, at the Morocco Club. The main witness was Moore's friend Marcus "Sweet Pea" Walker, who assisted in the crime and was shot in the leg. After the shootings, Moore had dropped Walker off at University Medical Center where Walker gave a hospital-bed statement to then-DA Ed Peters and then-Assistant DA Bobby DeLaughter, implicating Moore for the Morocco murders and as the killer of R.J. Washington.

However, on Dec. 17, 1997, then-Judge Robert Gibbs granted Moore's motion for bondan unusual move in a capital murder case, according to Smith. Then-prosecutor Tommy Mayfield agreed to a $75,000 bond, and Moore was released. Three weeks later, Walker and three other men were murdered in an Aberdeen Street apartment, removing the primary witness to the Morocco murders and, perhaps, to Washington's murder. Moore was later convicted for murder in the Morocco case, but the case didn't hold with the conviction thrown out on appeal. He then pled to manslaughter in November 2005 and given credit for time served, meaning that a man who had been accused of, but not convicted of, up to seven brutal murders would go free in a handful of years.

DA Faye Peterson indicted Moore in 2006 for the Aberdeen murders of Walker and the others, but evidence came up missing from the police department, forcing her to drop the case in late 2007.

With his parole in the Morocco case now revoked, Moore is in jail until October 2009. Upon his counsel's June 18 request, he was recently moved to the Madison County Jail from where he was being held in Leakesville. The court determined that he could not be housed in Hinds County or Jackson, although Hinds County must pay the costs of his incarceration.

In a separate June 2 motion, Mullins asked Smith to provide details of the "police cover-up" that he alleged in a May 27, 2008, interview with the Jackson Free Press. In that article, Smith said that officers are coming forward who say that they were not allowed to fully investigate the Washington murder, which has long been rumored to be part of a larger conspiracy, perhaps to silence the officer. Smith also complained about the difficulty of getting complete files and evidence from the police department in the case, including a canvas briefcase that police reports say were found with the body.

"Files have been destroyed, files missing, witnessed killed or intimidated," Smith said then.

Mullins wants to know what files are missing, what witnesses killed and intimidated, and who the officers are who were quelled them. "The District Attorney has apparently uncovered details of a mass conspiracy," Mullins wrote. Under the law, he said, Smith now has to provide "specific details" of the conspiracy, "including a complete list of all witnesses, statements and any other evidence" that support the cover-up. He also wants a list of all the evidence Smith believes has been destroyed or has gone missing. After the "cover-up" story appeared, Mullins said he would not address it in the media, but in court documents.

Judge Swan Yerger has not ruled on that motion, and a specific "cover-up" list has not appeared on Mullins' desk to date. "My own opinion is not discoverable," Smith said in response Tuesday. "Anything that is discoverable, (Mullins) either has or will have. It doesn't take a rocket scientist to know there were a lot of people who didn't want that case solved."

On June 24, Yerger ordered that a list of evidence from Washington's murderincluding blood, a used condom, a rape kit, several opened condom packages and the officer's clothing and body armorbe submitted to Reliagene Technologies in Texas for DNA testing, pursuant to a request by Mullins. The results of the testing will be compared to DNA taken from Moore.

**However, on Dec. 17, 2007, then-Judge Robert Gibbs granted Moore’s motion for bond—an unusual move in a capital murder case, according to Smith.** If I'm not mistaken, Judge Gibbs left the bench well before December 2007.

Upon his counsel’s June 18 request, he was recently moved to the Madison County Jail from where he was being held in Leakesville. The court determined that he could not be housed in Hinds County or Jackson, although Hinds County must pay the costs of his incarceration. Is this a common practice?

Robert was long gone before then. Bond is indeed rare or miraculous in capital murder cases.

Walt and Kacy, that was a dumb typo on my part. Judge Gibbs signed that order Dec. 17, 1997, not in 2007, obviously. Thanks for pointing it out, and I will correct it in the story above and run a correction in the next print edition.

It wasn't a dumb mistake. I've learned how easy it is to make mistakes. My respect for editors and writers have grown tremendously ove the last 5-7 years. Formerly, I thought any decent speller and writer could do it well.