JPD Will Not Change Arrest Policy Amid COVID-19 Outbreak 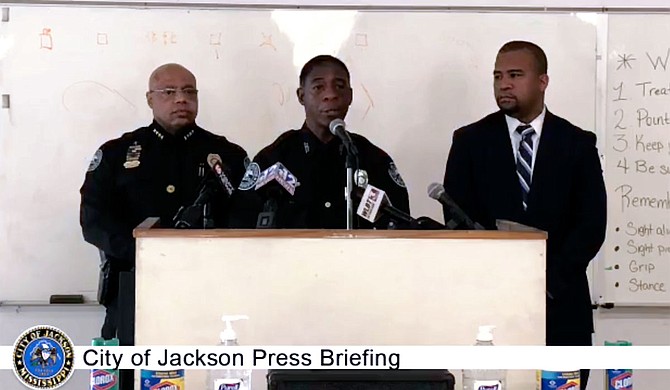 On March 19, the Jackson Police Department announced two recent drug arrests. Later that day, Officer Sam Brown said that while the JPD was taking sanitary precautions to protect on-duty officers amid the COVID-19 outbreak, the department would not make changes to its arrest policy. Courtesy City of Jackson

The Jackson Police Department is not making changes to its arrest protocols in the wake of COVID-19, even as other departments across the country are rethinking their own policing strategies in order to mitigate the spread of the infection at precincts and in overcrowded jails.

At a March 19 press conference, Officer Sam Brown of the JPD announced two recent drug arrests, both during traffic stops. After recovering 3 pounds of crystal meth, $19,260 in cash and firearms, officers charged one man with aggressive drug trafficking. Jackson police charged another man, whose vehicle contained $5,000 to $10,000 in marijuana edibles—candies and cookies—with possession of marijuana and designer drugs with intent to distribute.

Brown prefaced his remarks by emphasizing that the department was taking stringent measures to protect officers and limit the spread of COVID-19 while on duty. Officers and precincts have disinfectant wipes, hand sanitizers, masks and gloves, he said, and are instructed to wipe down their vehicles after each time they transport an individual.

JPD Chief James E. Davis reiterated at the press conference that his department would continue to target drug crimes and murders in Jackson. “We are going to do all that we can to bring these individuals to justice,” Davis said.

Policing and arrests will look the same during the virus outbreak, Brown said at the press conference and in a phone call later after the Jackson Free Press asked if the department would enact modifications to its policing strategy because of the unique public-health risks the COVID-19 crisis poses to the criminal-justice system.

“What we want to let the people know is that … we are first responders. So this particular pandemic is the same as if it were a flood, or if it were (Hurricane) Katrina, or a major disaster,” Brown repeated to the Jackson Free Press.

“Crime continues to go, and we still have to police it the way that we normally do. But again we have to make every precaution that we can to make sure that the officers have the necessary equipment to be safe,” Brown said

He added that social distancing is challenging for law enforcement. “Of course we try to (exercise social distancing) as much as possible, but when you’re dealing with the public, you’re going to have to at some point come closer (than) 6 feet,” Brown said.

“At some point, policing is policing. You just have to be careful with that part and stay safe,” he said.

Reports of confirmed cases of COVID-19 are already emerging from inside the nation’s jails and police departments. On March 18, news broke that a corrections officer at Rikers Island, the notorious New York City jail with a history of mismanagement and violence that holds approximately 9,000 people, had contracted COVID-19. In Hartford, Conn., four police officers had tested positive for COVID-19 as of March 19, and at least one officer from both the Chicago and San Jose police departments were diagnosed with the disease. Today, Cook County State Attorney Kim Foxx announced that her office is no longer prosecuting people for narcotics and marijuana over COVID-19 concerns.

Because law enforcement are in frequent and close contact with people while out in the field, they are at particularly high risk for contracting and spreading the virus.

Brown told the Jackson Free Press that no JPD officers had been tested for the disease, and none had shown symptoms. Recent studies have shown that many carriers of COVID-19 are asymptomatic. One study, based on data in China, found that almost 80% of new infections in that country resulted from asymptomatic or mild cases of COVID-19.

“We have not had any of our employees test positive at this point,” Brown said. He added that the JPD cannot test its officers.

“No, we do not do any type of testing. We don’t have the testing kits for that. That is something that would be done by medical staff, and our offices are not trained in (that),” he said.

If an officer showed symptoms or tested positive off-site, Brown said the department would then evaluate what measures to take. “We’ll have to deal with that when it happens,” he said.

Cliff Johnson, director of the Roderick and Solange MacArthur Justice Center at the University of Mississippi School of Law, urged Mississippi police departments to no longer arrest people for low-level, misdemeanor and non-violent offenses including drug crimes. Such modifications are necessary, Johnson argued in the March 18 press statement, to reduce the risk of spreading the sometimes-deadly virus inside of jails.

Jail and prison guards and other workers who move in and out of detention facilities are also likely to spread the disease to the vulnerable populations inside of them. In Mississippi, approximately 5,200 people are locked up and awaiting trial inside of county jails, and 19,000 people are behind bars in state prisons.

Some police departments have changed the way they operate in the wake of COVID-19 precautions. The Philadelphia (Pa.) Police Department announced on March 17 that it would delay arresting people for certain non-violent offenses, such as prostitution, narcotics possession, car theft and bench warrants.

In Memphis, Tenn., supervisors have instructed police officers to write citations for misdemeanor offenses rather than arresting them. Memphis police must also contact their superiors if they interact with someone who reports COVID-19 symptoms. At press time, news emerged that one Memphis police officer had tested positive for the virus.

Brown said that while the Jackson Police Department exercised control over whom to arrest and for what, any decisions regarding transfers or release of detainees fall under the purview of the Hinds County Sheriff. Hinds County District Attorney Jody Owens, he added, determines whether or not to pursue charges against the accused.

Brown added that Hinds County has released people from its jails in the past, to address overcrowding, which is an ongoing concern.

“It’s always been full. They’ve had instances in the past where they didn’t have any room to take anybody and they only accepted people that were arrested for felony crimes or domestic violence crimes. Now that was because the jail was full,” Brown said.

By press time, the Jackson Free Press was unable to reach the Hinds County Sheriff’s Office nor DA Owens.

But yesterday, Capt. Tyree Jones of the sheriff’s office told the Jackson Free Press that the decision to release inmates was not up to his office. “We don’t have the authority to release anybody,” Jones said on March 18.

A day later, Owens told the Jackson Free Press that his office was exploring the possibility of releasing certain pretrial detainees under conditions like ankle-bracelet monitoring, release on one’s own recognizance and reduced bond.

“What we’re doing is focusing on the hundreds of individuals who are currently being held in Hinds County jails and determining the best way to reduce that population,” Owens said on March 19. Owens added that his office had identified approximately 25 people who might be eligible for release.

Brown said that he had not observed a change in the frequency or nature of crimes so far in the greater Jackson area.

“We still have the same basic crime(s) that we have had,” he said, pointing to house burglaries and domestic-violence incidents as some common offenses. When asked, he predicted that crimes would likely decrease in Jackson during the COVID-19 outbreak because fewer people are outside.

The Jackson Free Press asked Brown whether the JPD expects an increase in domestic-violence cases and how the department plans to address that possibility as more people are required to stay indoors, potentially with abusive partners.

“We can’t control social crimes, because of course we are not in everybody’s home,” Brown responded. “The more people interact with each other, the more probability there is that you might have a social crime committed in a home, which, of course, we can’t control it.”

Experts across the nation are warning that reports of domestic abuse and child abuse may increase during the viral outbreak.

Residents who want to report domestic violence or seek resources can reach out to the Mississippi Coalition Against Domestic Violence at 601-981-9196 or the National Domestic Violence Hotline at 1-800-799-SAFE(7233) during off-hours.

The coalition recommends that those in immediate danger call 911.