City Responds to COVID-19 with Emergency Measures, Scales Back Operations 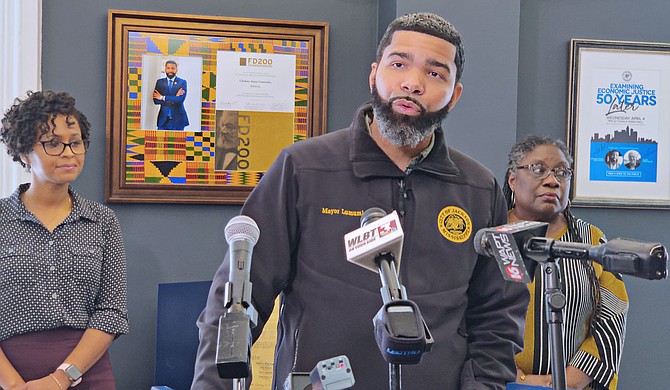 On March 12, Jackson Mayor Chokwe A. Lumumba announced the creation of a COVID-19 task force on to monitor the progress of the pandemic in the capital city. By March 16, the mayor declared a state of civil emergency and signed executive orders to prohibit the number of people in a gathering, shutter non-essential City buildings and require non-essential City employees to work off-site. Photo by Nick Judin

On March 16, Mayor Chokwe A. Lumumba declared a state of civil emergency in the City of Jackson due to the coronavirus outbreak, signing additional executive orders to limit the number of people in a gathering and shutter some municipal buildings. The mayor also urged residents to continue following stringent hand-washing and coughing hygiene, as well as practice social distance.

The mayor originally said the city would ban gatherings larger than 50 people, but a federal 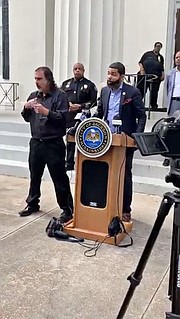 After declaring a state of civil emergency the morning of March 16, Mayor Chokwe A. Lumumba encouraged residents to continue practicing social distancing, handwashing and coughing hygiene, stay home as much as possible and to avoid gathering in groups. Courtesy of City of Jackson.

guideline released around the same time reduced the limit to 10 people in one space together.

To date, the State of Mississippi has confirmed 12 cases of COVID-19, including two students in Jackson. As of March 16, the State had tested 289 people for the disease.

Addressing reporters outside City Hall, the mayor said the building was closed to the public until further notice, along with all non-essential City buildings. Non-essential City employees were required to work off-site, as of 1 p.m. on March 16.

Ward 2 Councilman Melvin Priester Jr. confirmed to the Jackson Free Press on Monday that the Jackson City Council would meet Tuesday, March 17 for its regular meeting with members having the option to attend the meeting remotely via teleconference. The meeting will stream for the public as usual on the council’s website and the City’s Facebook page.

Priester explained that, for the next several weeks, council meetings would focus on the “bare minimum, necessary parts,” like approving vendor and City employee pay, rather than honorary resolutions, proclamations, or major decisions that require more significant input from the administration and the public.

“What the council is going to try to do is not have any controversial or big-ticket issues for the next couple of weeks and just (focus on) the most basic agenda items,” Priester said. He encouraged the public to use the City’s digital tools and continue interacting with their council people through email, telephone and social media.

“The most important thing right now is we need to just not have large group gatherings,” Priester reiterated.

The Water Sewer Business Administration will stay open “as it is an essential facility as we deal with a hygienic need,” Lumumba said, referring to the importance of hand-washing and sanitizing during the COVID-19 pandemic. The City will continue to collect water-bill payments, he added, and customers can continue paying their bills online or drop them off in person.

“We want to encourage residents to utilize City online services as much as possible. If there are any City services that you do not need immediately and can wait, hold them until this emergency has concluded,” Lumumba said.

Last Sunday, the Mississippi Public Service Commission voted to temporarily halt disconnections of water, sewer, electricity and gas services during the COVID-19 crisis. The suspension of disconnections is in effect for 60 days.

By press time, the Jackson Free Press was unable to reach Jackson Public Works Director Bob Miller and City Engineer Charles Williams Jr. to inquire about the impact of more people staying at home on the City’s water-sewer infrastructure.

JATRAN buses are still in service and are being thoroughly cleaned every night, the mayor said, and the City has supplied bus drivers with sanitation products.

Lumumba also said that the City was working with United Way and Jackson Meal Matters to support vulnerable populations such as the homeless and young people during the COVID-19 crisis. The City would provide additional services “as our resources allow us to,” he said.

City spokeswoman Candice Cole confirmed in a call today that the City was involved in a collective grass-roots effort to support local vulnerable communities amid the COVID-19 pandemic. She said that the City, the People’s Advocacy Institute, University of Mississippi Medical Center, the Strong Arms of Jackson and the Jackson Fire Department had been working collectively to coordinate a mobile meal plan, particularly for students who are out of school and rely on school meals as their primary form of nutrition.

In a press release Sunday, Tyson Jackson of the People’s Advocacy Institute announced the collaboration, encouraging families in need to call or text 615-946-4197 to schedule a pick-up time and location for breakfast and dinner amid school closures. The hotline is on-call 24 hours a day. Health-care professionals are overseeing the food-distribution efforts, which aim to “minimize one-on-one contact and group gatherings” to mitigate risk of infection.

On March 17, the City of Jackson’s newly assembled Coronavirus Task Force will meet to discuss strategies to ameliorate the pandemic.

“We will be working with our state epidemiologist and other public-health professionals to join us for our gathering,” the mayor said, adding that he would update the public on how the City intends to proceed in managing the crisis following the meeting.

The mayor strongly encouraged local eateries and bars to adopt a take-out and delivery-service model to minimize risk of spreading COVID-19. He urged businesses that continue to host people on their premises to “do what is necessary to limit crowds and to ensure adequate spacing between patrons sitting down at your restaurant.”

Though the City of Jackson has not ordered a shutdown of restaurants and bars as numerous other states and cities around the world and country have instituted—including Atlanta, Dallas, New York, New Jersey and Connecticut—the mayor told reporters after Monday afternoon’s press conference that his administration would implement a stricter policy if necessary.

“At this time, we ask that they work with us,” the mayor said of the venue owners. “We know that this has severe economic implications, and we know that those establishments are concerned for that, but we believe that the public-health concern rises above that. And so we will be working in combination with them, and if need be, we will implement more extreme measures or more severe measures going forward.”

A new report today in the journal Science found that for each confirmed case of COVID-19 in a community, approximately five to 10 more people could be unknowingly carrying the disease without symptoms. The report also found that such milder or asymptomatic cases account for almost 80% of new COVID-19 infections.

“If we have 3,500 confirmed cases in the U.S., you might be looking at 35,000 in reality,” Jeffrey Shaman, an Columbia University epidemiologist and senior author of the study, told the New York Times.