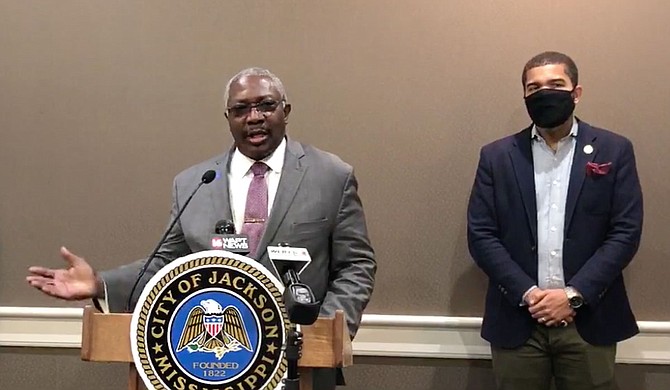 The City of Jackson could lower residents’ water-bill debts if Gov. Tate Reeves signs Senate Bill 2856, which both houses of the Legislature passed unanimously, 51-0 in the Senate and 108-0 in the House of Representatives.

Sen. John Horhn, a Jackson Democrat, sponsored the bill, which he said allows the City to move what it has deemed uncollectible water bill debts to another category, which will not count against its financial rating.

"Constitutionally, no unit of government can forgive debt. But you can put it in a separate fund that it does not count against your bond rating," Horhn said at a press briefing on June 22. "We are hopeful that many in the city will be able to get the benefit behind this important legislation (through adjusted debts), and also that the City of Jackson will be able to get some benefit for getting our bond rating up and not have this debt that is uncollectible to sit on our books and count against our bond ratings."

Horhn said there is every expectation that Gov. Reeves will sign the bill.

Mayor Chokwe A. Lumumba said that residents have been on the receiving end of skewed bills they have been unable to pay because of the dysfunctional billing system that ended in a legal settlement against Siemens.

"We have been significantly challenged with our water-sewer business administration, as it pertains to water billings and the erroneous and sometimes difficult bills that residents have been tasked with," Lumumba said at the press briefing. "So it has been a part of our legislative agenda for three years now to provide relief to our residents, and we are happy to announce that the state legislature has passed a measure that has made it possible for us to adjust bills for our customers."

"The bills that many of our residents have received over time have made it impractical for some of them to pay. This is a good day for everyone," he added.

Lumumba: 'We Have No Funds For Sewer Repairs'

The perfect storm of aging infrastructure, depleted enterprise fund and moribund repair equipment have led to the intractable problem bedeviling sewer management in the city of Jackson. Mayor Chokwe A. Lumumba shared this dire picture with participants in a town hall on Zoom held June 20 and 22.

When answering a question on why people have to wait for weeks for sewer repairs, Lumumba said, "We have no funds to address these things, and so we have been trying to create ways to get to these sewer repairs."

He said the City’s older sewer trucks are unreliable, and the cost of leasing private ones is about $10,000 per month. "The issue is not only the truck themselves, it's also about the human capital that has the understanding of how we utilize these trucks," he said.

City Engineer Charles Williams said that the city currently has two of the trucks in operation and is renting one till the end of the fiscal year. "We have received one that was in service back this week," he said. "We have another truck that is currently in service, and hopefully, we will put it back in the next 30 days."

He said, as a short-term remedy, the City plans to enter into a rent-lease agreement for up to four additional trucks, which will be placed in each of the four precincts so that no area is left behind.

Williams said the mayor is seeking to allocate some money to address sewer failures within the city as a medium-term measure, with the long-term measure involving finding a lasting solution to the water-sewer business administration of the state. He spoke of a plan for a newer technology that will preclude digging up asphalt to rectify the fault in the aging infrastructure.

"We are going to utilize some newer technology which will allow us to televise those lines, do an assessment, and then go in and line them without having to do any major dig-up to our existing pavement asphalt, he said. "It is more of a non-disruptive method that we will be able to utilize."