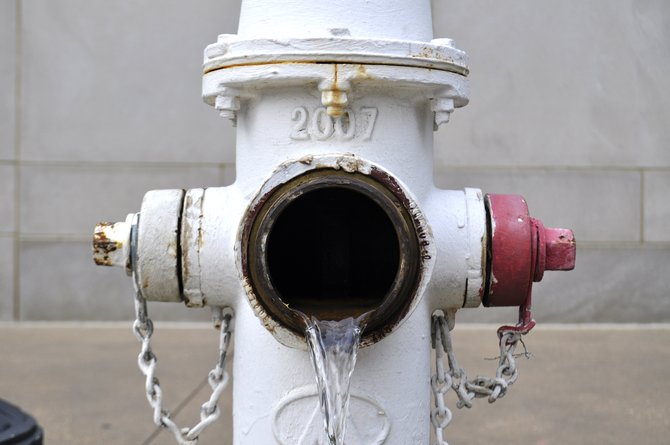 More than $2 million in water fees have gone uncollected as city ratepayers dispute their water bills. The city is undergoing an audit that city officials hope will streamline this and other problems related to collecting water revenue. Photo by Trip Burns.

Some $2.2 million in water fees to the city of Jackson remain suspended in administrative limbo. Under law, city water customers facing disconnection can dispute the amount of their water bill if they believe there is a leak in the city's line. While the water department investigates the matter, the customer's account is given an "E" code, meaning the water stays on until a settlement is worked out with the city.

Currently, more than 1,110 accounts are E-coded, according to records the Jackson Free Press obtained through an open-records request. Of these, the Jackson Zoo owes the most, $578,002.49. Another public institution, Jackson State University Transitional Residence Hall, has a balance of $19,955.

Rounding out the list of accounts that owe more than $10,000 are hotels, apartment complexes and trailer parks. Combined, about 20 accounts represent $1.6 million in E-coded water bills, or 72 percent of all E-coded accounts. It is unclear how long the accounts have been E-coded as the water department's software does not track the age of debts, city officials say.

At an Oct. 6 media briefing, Mayor Tony Yarber cited a combination of the city's internal controls and customers not paying water bills as two reasons why the city loses approximately $750,000 in water revenue.

"Currently, our water-sewer business administration does not operate under a functional business plan," Yarber told reporters at the briefing. "The business practices are not sound practices."

The uncollected revenue from water that does flow the meters of homeowners is exacerbated by the fact that 40 percent of water that the city treats is lost somewhere in Jackson's aging, deteriorating underground infrastructure.

The city's water problems came to the fore during the recent budget negotiations and, later, when Yarber asked the city council for permission to hire a consultant to review certain aspects of the city's water department, which Yarber believes will help the city streamline the department and capture revenue.

Under the contract, Charlotte, N.C.-based Raftelis Financial Consultants will perform a rate-sufficiency study, assist with the development of the one-percent sales-tax master plan and review part of a 2013 contract the city signed with German international engineering conglomerate Siemens AG.

The Siemens deal includes the installation of new digital water meters and a new billing system. The contract includes a "performance guarantee" of increased water revenue for the city.

Raftelis is one of a handful of national firms specializing in water and sewer consulting. Ninety-nine percent of the firm's clients are municipal utilities, and approximately 90 percent of Raftelis' work involves setting water and sewer rates.

In many other cities where they have worked, including New Orleans, Birmingham and Baltimore, Raftelis' audits have led to higher bills.

Kishia Powell, Jackson's public works director, has advised the city council that water rates need to be raised, although Yarber has stressed that hikes could be up to two years away.

Still, the city has fallen about $12 million short of the roughly $80 million in water revenue projected for the fiscal year 2014. That shortfall has not only meant less money going into the local economy, but it also violates the city's bond covenants.

Under a borrowing agreement, Jackson must maintain a 120-percent debt-ratio coverage, meaning it must collect 20 percent over and above expenses specifically to pay interest on its bonds.

In recent years, Jackson has struggled to meet that threshold. In August 2011, Moody's downgraded the city's water and sewer debt, citing, in part Jackson's failure to raise water rates to meet its debt coverage.

Failure to comply with debt-coverage ration goals could result in default, making it more difficult and costlier to borrow for future infrastructure needs.

The City of Jackson can no longer afford to be lax in repairing its water and sewer systems. If it cannot account for 40% of the water it treats and suspects it is lost due to leakage in the system, we are indeed in trouble. I would suggest that the city take its largest debtor, the Zoo, and work on that one immediately to find any leaks, repair or build new lines for the Zoo, and make any adjustments to the bill needed. If a payment plan over several years needs to be worked out, then do it, but get them back on-track as fast as possible, and then do a follow-up story with the Zoo management and media about the resolution of the matter.

After that, go to the next largest debtor.