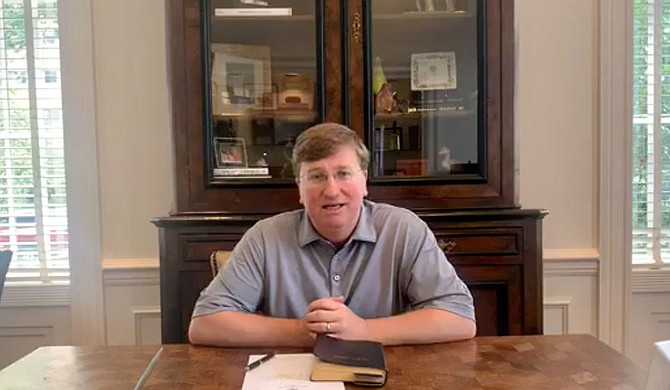 Gov. Tate Reeves has vetoed the “Jackson Water Bill,” a piece of proposed legislation that passed in both the Mississippi Senate and House of Representatives with no opposing vote. Reeves announced his veto on Facebook Monday.

Reeves, however, found several holes in the proposal, not least being its application to only municipalities with a minimum of 150,000 people, which means only Jackson. "Other cities have issues, too,” he wrote. “Why should only Jackson get a carve-out?" he asked.

"It's a bill that only applies to the city of Jackson. It allows politicians to say that individuals are not responsible for paying their water bill," he wrote. "It's supposed to be for the impoverished or needy, but there are no safeguards in place to make sure that's the case. It's totally up to them."

He opposed the carte-blanche power for politicians to decide debt forgiveness, saying that a government acting like it can give free money usually leads to higher taxes.

"I'm very concerned about the 'free money' concept that has taken over politics today," the governor said.

The legislation also contradicts an existing law, he wrote, which states that "No free service shall be furnished by any [government] system to any private person, firm, corporation, or association."

That law was put in place because "for years, Mississippi had a problem with politicians giving taxpayer-funded services away as political gifts,” Reeves said.

"Allowing a few politicians to determine who does and does not have to pay for government services is bad policy. It removes all responsibility for the city from the equation," he added.

He sees it as allowing "a few politicians to determine who does and does not have to pay for government services is bad policy. It removes all responsibility for the city from the equation."

While conceding that Jackson "has serious troubles with their water system" with people overcharged "in the past," he said, "there might be another bill that would help."

He realized that his veto might not be enough to stop the bill because of the unanimous passage it got, meaning that the Legislature can easily override his veto. But Reeves warned that though politicians in charge now can be trustworthy, without an end date, the bill leaves room for future abuse.

Asked at a press conference today about COVID-19 for a response to Reeves' veto, Lumumba responded only briefly: "I understand that there are some things in the works right now, so I will reserve comment until a later date."

In a continuation of the Lumumba administration’s road-repavement initiative for 2020, the Jackson mayor yesterday announced that work has begun on McDowell road in south Jackson.

While standing with the city engineer, Charles Williams, at the portion of the road in front of Key Elementary School, Lumumba told the press that he hopes the project and similar ones will improve Jackson’s economic fortunes by attracting businesses.

"What is taking place right now (on McDowell Road) is some of the curb and gutter work and some of the sidewalk works that needs to take place in preparation for the resurfacing that is going to happen shortly after," he said. "We can hopefully see our crumbling infrastructure and an effort to repair that turned into an economic frontier, turn into more business development, turn into more investment into our community, and our city."

The mayor praised the residents for their patience, while confessing that it is impossible to tackle the infrastructural needs all at once. "We cannot address every woe; we cannot fix every pothole, every issue that we see across the city," he said. "We do not have the resources to accomplish that."

McDowell Road is among the three Ward 6 thoroughfares that the administration is focused on for re-pavement for a total of $5.3 million. Belvedere Road, announced previously, is among them. The plan covers 13 roads for 2020.

Lumumba, at the same press briefing, said City Attorney Tim Howard is preparing a new executive order to ensure strict compliance with the use of facial covering in the city to stem COVID-19 spread.

He had hinted at this in a previous briefing on June 22, where he referenced the growing number of infections in Hinds County and said that businesses need to step up and ensure that those who come inside their premises use facial coverings.

Yesterday, Lumumba said though the city is "still doing a relatively good job in terms of our infection rate for cities of comparable sizes," the number shows a surge in confirmed cases and requires urgent steps to not get out of hand. He reiterated the need to prevent the specter of increased hospitalization rate and ventilator use; otherwise, he is prepared to shut the city down again.

He hinted that the proposed executive order will provide for revocation of business occupancy licenses if they do not enforce facial covering requirements for their patrons. "We can shut you down if you are not adhering to this, and we are doing this so that we can prevent having to shut down the city in its entirety," he added.

"Where residents are not wearing face masks in public, we will be prepared to issue citations," he said. "It is critical that we protect ourselves that protect our residence."