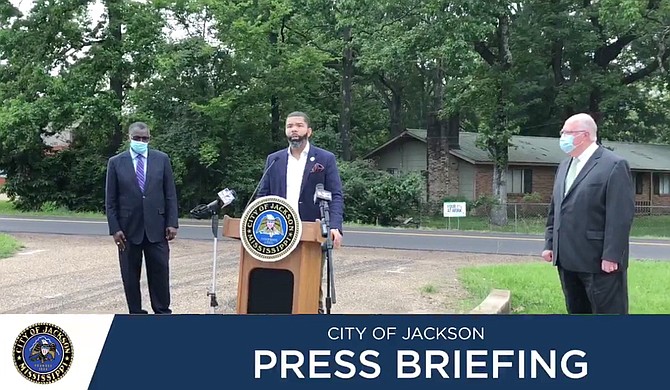 Mayor Chokwe A. Lumumba announced on May 22, 2020, that 13 Jackson streets are now slated for repaving. Photo courtesy City of Jackson

At St. Paul Church of God in Christ on Oak Forest Drive, Lumumba said this round of repaving will cost $5.3 million. He also thanked the citizens of Jackson for their sacrifice for funding the projects through the 1-percent sales tax.

The mayor acknowledged the extent of Jackson’s road-infrastructure deficit, saying his administration has, in the last three years, poured $15 million into “south Jackson alone” to repair bridges and repave roads.

"We will continue to do that for many more roads to be paved," he said. "Much more work will be done. And while we know that we cannot do it all, we will demonstrate that we are serious and committed."

He noted that the 1-percent tax revenue is the primary source for road projects funding in the capital city. "We are thankful that the citizens have made the intentional decision to sacrifice more of what they pay when they get the goods and services they need, to see their city turn the corner."

Water and sewer management are also in a sad state, the mayor acknowledged.

"I hear the cry of the residents across the city who are crying about not only paving issues but issues of sewer overflowing and sewer failure across the city," Lumumba said.

He mentioned no specific initiative or timeline to rectify them but noted that the 1-percent sales tax commission, with a mix of appointees by former Gov. Phil Bryant and Lumumba, does not have sewer issues in its master plan. The mayor, therefore, pinned the hope of having any respite to the enterprise fund.

"That is why we have not been able to do that by way of 1-percent revenue; that is why we are trying to build our enterprise fund, the money that we get from water bills, to take care of the issues that people quite frankly deserve an answer badly," he said.

At the event, Director of Public Works Bob Miller said that since he first arrived two and half years ago, Mayor Lumumba has emphasized the need for effective planning so that no part of the city is left behind.

He said Lumumba emphasized the need to restore the driving surfaces of the streets with a focus on "fair and equitable investment in all parts of the city." He said that the engineering department, which Dr. Charles Williams leads, laid out the plan put in motion.

"If you like this, watch what happens next," Miller added.

Pastor Jesse Kelly of St. Paul Church of God in Christ, told the mayor he was excited about Oak Forest Drive being paved.

"When we come back together to worship together, our membership will encounter no hindrances,” Kelly said. “They will be able to come to church on a smooth street.”