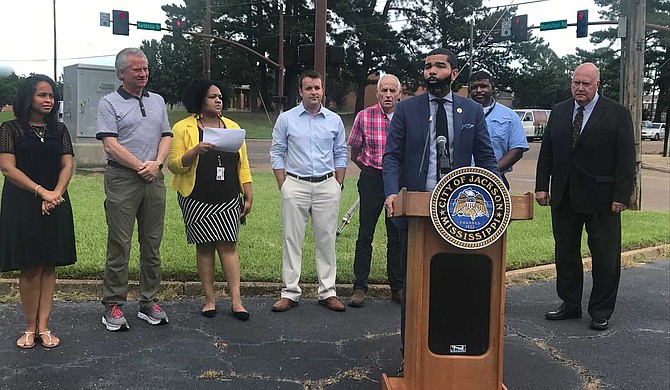 Mayor Chokwe A. Lumumba announces the street repaving of Northside Drive at a press conference on Aug. 19. He expects work on the project to begin in November and finish sometime in spring 2020. Photo by Aliyah Veal

JACKSON—Standing in a church parking lot near the intersection of Northside Drive and Manhattan Road, Jackson Mayor Chokwe A. Lumumba announced the start of a street repaving project that will help turn the city into an “economic frontier,” he said. The first beneficiaries will be residents and businesses along Northside Drive, where the City will resurface the road and repair its sidewalks.

The project will span 1.25 miles of Northside Drive from Interstate 55 Frontage Road to State Street. The project will cost $2.4 million, which the city will pay for using funds from its 1% Sales Tax Commission and with money the Mississippi Department of Transportation received from the Federal Highway Administration, an Aug. 19 City of Jackson press release said.

“Northside Drive is one of our most heavily trafficked streets in the city of Jackson. Anyone who has traveled Northside Drive in recent months or within the last couple of years knows the terrible condition that this road is in. We look forward to the project going forward,” Lumumba said.

The 1% Sales Tax Commission is a panel of 10 people whom the mayor and governor appointed to provide guidance over the spending of funds from the local 1% sales tax.

Duane O’Neill, former president and chief executive officer of the Greater Jackson Chamber Partnership and a member of the 1% Sales Tax Commission, said at the press conference that Northside Drive is an important thoroughfare that means a lot to the residents of Jackson.

“It was the mayor’s idea that we leverage some money out there and do more for the people of this great city. It’s important for you to know that because this is one street, and there are hundreds of streets in town that need it,” O’Neill said.

Lumumba wants residents to know that the City intends to repair all the roads across town. His administration doesn’t want to see “islands of wealth surrounded by a sea of poverty,” he said.

“When we think about the work that is taking place, I’m reminded of the words of the late Mayor Lumumba, who said that we have to take what has been a challenge for us, our crumbling infrastructure, and turn it into an in an economic frontier,” the mayor said, referencing his father, Chokwe Lumumba, who died while serving as mayor of the City in 2014.

While in office, the elder Lumumba pushed for the 1% sales tax to fund improvements to the city’s infrastructure. With 90% support, Jackson voters approved the tax in a referendum in January 2014, just months before the former mayor’s death.

‘Finally Responding to Their Cry’

At the Aug. 19 press conference, current mayor Chokwe A. Lumumba said that, based on the Department of Public Works’ consent decree with the City, the department has to make sure the sidewalk and streets are in compliance with the Americans With Disabilities Act, or ADA.

The ADA is a federal law that prohibits public discrimination against individuals with disabilities when it comes to things like work, school and transportation. To be ADA compliant, sidewalks and ramps have to meet certain measurements to make life easier for people with disabilities, particularly those in wheelchairs.

The first phase of the project will involve repairing the sidewalks on Northside Drive and then resurfacing the street, he said. Street paving will begin in the fall, and the City projects the project to finish by spring 2020.

“Residents living alongside this stretch of Northside Drive will be impacted by the roadwork and are advised to use an alternate route,” the press release said.

Lumumba thanked the 1% Commission, the Jackson City Council, MDOT and the Department of Public Works for seeing the project to fruition.

“We’re hearing what our citizens are saying and we are finally responding to their cry,” he said.