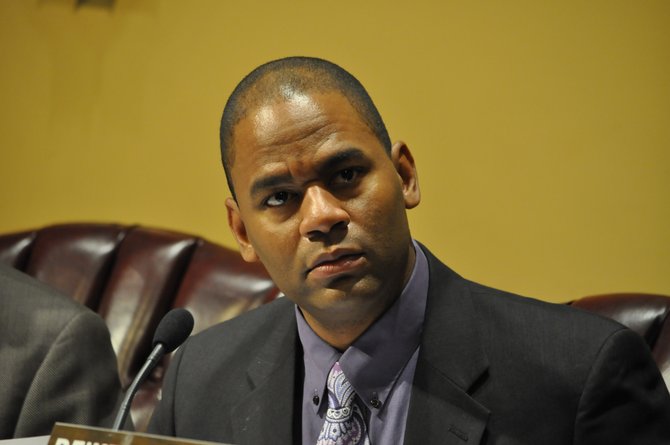 Councilman De’Keither Stamps says expected revenue from the 1 percent sales tax could be cut more than half if the City cannot find a way to reverse a surprise amendment the Legislature made in April. Photo by Trip Burns.

Jackson's 1-percent sales tax went into effect March 1, and now the City of Jackson is scrambling to reverse legislation that quietly amended the rules of the tax back in April, which will drastically affect funding for city resources—even as much as 53 percent.

When 90 percent of the voters approved the tax back in January, they understood that the estimated $15 million would go toward the city's infrastructure, which has been a thorn in the Jackson's side for years.

The tax originally applied to all business in the state making sales, delivery, or installations of property or services within the city of Jackson. However, House Bill 787, which passed in April, removed this portion.

The original sales taxes included some exemptions: food and beverages at restaurants, lodging from hotel and motel rooms, retail sales of food not purchased with food stamps, and subscription television and Internet services.

However, the new amendments imposed changes would increase the number of goods and services exempt from the tax, including "the Special Infrastructure Tax for the wholesale sales of food and drink for human consumption sold to full-service vending machine operators and the wholesale sales of light wine, beer and alcoholic beverages."

This increase in exemptions could cut the estimated tax revenue down to $8 million or $9 million, Ward 4 Councilman De'Keither Stamps says.

"It's a voting issue," Stamps said. "The citizens voted for something specific so we don't believe it's right for the state government to change the law after the citizens have voted on it, with little to no information given to the city or the constituents."

Stamps said that the Jackson City Council is requesting the opinion of Attorney General Jim Hood as well as the U.S. Department of Justice to see if the state can amend the tax after the fact.

"The amendments that have been added were a surprise to us," said Duane O'Neill, president of Greater Jackson Chamber Partnership. "We do hope that we can address it and make sure that our business community has a voice along with the citizens of Jackson in how that tax is going to be collected."

The city administration is now under pressure to adjust the spending plan for the tax revenue. Stamps said the original plans for the $15 million included major funding to storm water, city water, city sewage, streets and drainage. If revenue is chopped, the entire plan will have to be revamped and reprioritized.

"Those are interconnected plans," Stamps said.

The previous administration, under late Mayor Chokwe Lumumba, was poised to make its three nominations to the 10-person sales tax commission.

Stamps said the city originally wanted to nominate the mayor, city council president and the public works director as the standing positions for the commission.

The councilman said there is now uncertainty about whether a council member may serve on the commission. However, Stamps wants to move forward with the nominations and deal with any problems later, saying that the current nominations are the best fit for the commission.

"There are no three best people than the mayor, council president and the public works director to speak to the needs of this city," Stamps said. "My position is, just nominate those three, and if someone has a problem with it, we'll change it."

"I feel comfortable, and the council feels comfortable in those nominations."

Undercutting progress - I agree. It seems like it was done deliberately to stifle the city's ability to grow and enhance services for its citizens. Why does this look like hidden racisim to me? Because I know it when I see it ~ that's why.

i don't recall hearing any State pushback or hell, any INVOLVEMENT when JACKSON VOTERS chose to make this happen in the first place...so why dilute it now? hidden racism + "jackson-wont-give-me-a-cut-of-those-duckets-so-lets-stick-it-to-em". this is such shullbit.

Those exemptions were put into a BOND Bill that had goodies for a lot a people and i'm sure they didn't bother reading the fine print as long as their pet project was funded. Here's a sample of the things included in the HB 787 bond bill:

The last 2 mentioned are very interesting. But the list goes on and on in HB 787. Stuck in there are the exemptions from the City of Jackson's 1% sales tax. With pretty much every legislature getting a present in this bill, they didn't care about the exemption placed in there. The City of Jackson is constantly being screwed by the current administration AND the legislature. CHANGES NEED TO OCCUR IN 2015. EVERY SEAT IS UP FOR RE-ELECTION AND IT'S TIME FOR THE MAJORITY OF THEM TO GO!

Agreed Knowledge. This piece of legislation is full of gifts to municipalities but then you turn around and take something from Jackson. It's obvious that big business and other lobbyists convinced, influenced and/or paid certain persons on that House committee to place that in that bill. And the representatives in Jackson were asleep at the wheel.