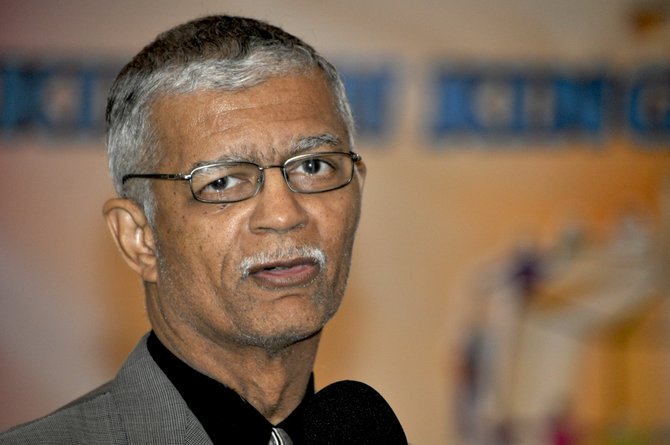 Faced with steep spending increases to meet the challenges of the U.S. Environmental Protection Agency's consent decree and Jackson's crumbling roads, Mayor Chokwe Lumumba says he is moving ahead with a 1-percent sales tax. Photo by Trip Burns

Faced with steep spending increases to meet the challenges of the U.S. Environmental Protection Agency's consent decree and Jackson's crumbling roads, Mayor Chokwe Lumumba says he is moving ahead with a 1-percent sales tax. Lumumba announced a deal with the Greater Jackson Chamber over the tax commission's makeup, but questions over the deal's legality remain unanswered at press time.

The city has been in an ongoing debate over the much-ballyhooed 1-percent sales tax—and the commission that would oversee how the city spends the revenue—since former Gov. Haley Barbour signed Senate Bill 3268 into law in 2009. The bill gives final approval for spending the revenue (an estimated $15 million in Jackson) to a 10-person commission.

Under the law, the mayor would appoint three commission members, subject to city council approval, and the governor and lieutenant governor would each appoint one member. A local chamber of commerce (in this case, the Greater Jackson Chamber Partnership) would submit a list of eight nominees, of which the mayor would select four. The speaker of the state House of Representatives would appoint the 10th member, although he or she would not have a vote.

All commission members would have to be Jackson residents, except for the GJCP's nominees, who must only have a business in the city. That means the chamber could appoint people that live outside Jackson to have approval over Jackson's spending.

The commission make-up has been the sticking point for former mayors and for Lumumba, who took a hard stance during his candidacy against the tax commission's structure and giving up the city's sovereignty over tax dollars and resources. Arguably, Jackson voters sided with Lumumba when choosing him over businessman Jonathan Lee.

Lee's campaign took an aggressive stance for regionalism, proposing to, among other things, put the 1-percent sales tax with the state-mandated commission to a vote.

Lumumba shared then-incumbent Mayor Harvey Johnson Jr.'s position that the commission's makeup was a slap in the face to Jackson's leadership and could leave decisions in the wrong people's hands.

"So (the Chamber said), 'Well, we'll appoint some good people. You don't have to worry.'" Johnson said in his endorsement interview with the JFP in May. "But this is a 20-year law. I'm the mayor now, and some good people will be appointed now, but what if later on the not-so-good people are appointed? What happens then? ... This is a 10-person commission, so I said to the Chamber, 'Look: Why don't you just assign your four members to the city.'"

Johnson said his proposal was rejected on the grounds it might not be legal.

"(The chamber) thought about it, and they came back with an opinion saying: 'You know what? We don't believe that we can assign a public duty that's spelled out in law. ... We have lawyers who have that opinion as well, but supposedly, they got an unofficial opinion from the attorney general saying that they couldn't do it, so we had to back off of that compromise."

Current chamber Chairman Socrates Garrett confirmed that the group had pitched the same deal to Johnson, but did not mention legal problems with it.

Lumumba maintains that he hasn't changed his position on the commission, but says that he and the chamber have reached a compromise. "I can publicly say that the solution we've come up with is (that) the (GJCP) has agreed to let us appoint their members to the commission," Lumumba said Sept. 11. "It's not perfect, but it would give us a majority on the commission."

The mayor could not be reached about the legality question before press time.

The particulars—whether Lumumba would have complete control to name the chamber's nominees or if he would simply have input—are also unclear.

GJCP President Duane O'Neill has not returned calls, but Chamber Vice President Lewis Slater said that although he hadn't been directly involved, he believes the outlook for getting the 1-percent tax to a vote is "particularly good."   One of the bill's authors, Sen. John Horhn, D-Jackson, said hoopla over the commission is overblown. "It's amazing to me that the city officials always make a mountain out of a molehill," Horhn said. "The bill simply places the formality of having the city's plan blessed by the committee, and the city essentially remains in charge of its own master plan."

Another unknown is how Jackson voters will react to the tax, considering the city just raised water and sewer rates to fund a greatly expanded budget. The law requires approval of 60 percent of the city's voters. If the mayor and city council decide to hold a referendum vote, citizens could be polled as quickly as 21 days after the council posts a public notice.

“We have been in conversations with Mayor Lumumba concerning the one cent sales tax and the issue of the Oversight Commission. We will do everything in accordance with the legislation regarding the Commission. We have always appreciated the Legislature passing the legislation and look forward to the opportunity to take the issue to the citizens of Jackson for a vote. The selection of the Commission Appointees is, and always has been in the hands of the sitting Mayor of Jackson. We just give a list of the potential nominees to the Mayor for his selection.”