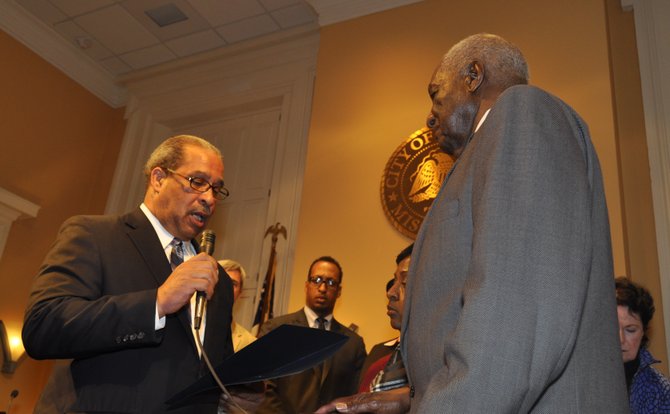 The Jackson City Council just came out of executive session at City Hall at 6:43 p.m. today and announced that they have selected Council President Charles Tillman as acting mayor, Melvin Priester Jr. as council president and De'Keither Stamps as council vice president—immediately swearing them in.

Tillman said that, within the next 30 days, the council is going to set a date for a special election. When asked if he knew the mayor was sick, Tillman said he noticed yesterday that Lumumba had a cold, but he didn't think anything of it.

Administration Chief of Staff Safiya Omari made a brief statement at 6, saying that this afternoon, "our brother Chokwe Lumumba" passed away at St. Dominic's hospital. She not provide any information about the cause or time of death. It has been long rumored that Lumumba was very ill, perhaps from cancer, but he had denied the rumors to the Jackson Free Press.

Bishop Ronnie Crudup led a prayer at City Hall, as emergency vehicles gathered with lights flashing outside. "We're shocked at the death of our mayor," he said. He wants us to pray for Lumumba's family and our city. "He was a good man, a man of wisdom."

Jackson City Council President Charles Tillman said that, under the Lumumba administration, Jackson was moving forward as a city in transparent ways. He said city residents were excited about what he was doing.

Such high hopes for our city. I hope that we won't throw away all that he has accomplished in his short time as Mayor.

Sad, sad day for the city. Mr Lamumba, like him or not, was a intelligent man who was taking control and making positive things happen. He was a stable influence, now I fear it will revert back to the circus it has been for years.

What a horrible shock for Jackson. From what I have observed, Lumumba was a thoughtful man with a plan to move the city in a positive direction. Terribly sad.

From afar, it looked like Jackson had found the mayor that will get the city on the right track. I was really looking forward to how Jackson will develop under Lumumba.

Strength to the Lumumba family and friends during this time.

Its a tough pill to swallow - because outside of Chokwe being mayor - he was a good human being. Some tried to sell him short of being a good humanitarian!

He was a voice for those who didn't have one and he believed wholeheartedly in that.

I do believe in the ability of the citizens in Jackson to find a mayor, the same way we found Chokwe.

It would be a disservice to Mayor Lumamba to take a halfway approach to finding his successor.