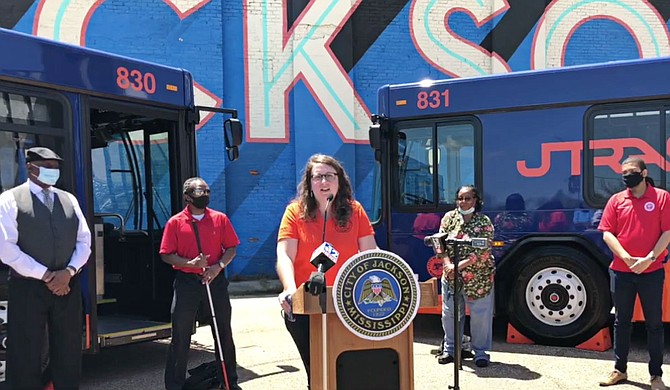 Director of Planning and Development Jordan Hillman spoke at the launch of the new transit system brand with two new buses in the background. Photo courtesy City of Jackson.

In another effort to reverse the degrading of road infrastructure in Jackson, Miss., Mayor Chokwe A. Lumumba announced the repaving of Belvedere Drive at a press briefing last week at Mary Belle Key Elementary School located on the street.

The project, which will start with work on the sidewalk, the mayor said, is one of three for Ward 6, costing $5,725,000 and funded by the 1-percent sales tax commission, which administers 1-percent sales tax increase Jackson voters approved in 2014.

"It is part of contract B of the 2020 paving season campaign," the mayor said. "We are grateful to the constituents for their continued patience and sacrifice so that this project can take place. It has been our mission as an administration to show progress."

He acknowledged the long-term neglect of Jackson roads, which has left swaths of roads in a severe state of disrepair.

City Engineer Charles Williams said that McDowell Road will also be resurfaced and would improve access to Highway 80, "and accessibility for the children who attend the elementary and the junior high school located in this vicinity." Peeples Middle School is also on Belvedere Drive.

Williams said the project is progressing very well despite the prevalence of rainfall. The City is repairing sidewalks first, then asphalt resurfacing.

Earlier, on May 6, the administration announced the repaving of Robinson Road with the 1-percent Sale Tax Commission and the Hinds County Board of Supervisors contributing a total of $2.4 million for it. On May 22, the mayor said the City is repaving a total of 13 roads across Jackson in this repaving season.

With new colors, name, design and two new buses, the City of Jackson has launched a rebranding of the public-transit system. Local graphic designer Tyler Tadlock is responsible for the design.

The new branding revealed June 11 meant a change in the name from JATRAN to JTRAN, adoption of green and yellow as brand colours and a new tag line, "Discover your route.”

"The driving force of Jackson” was the previous marketing phrase.

Mayor Lumumba said having a sound transit system is not only vital for the growth of the city but leads to economic development.

He said the City will add hybrid electric buses to its fleet through a $5.5-million federal transit grant.

Director of Planning and Development Jordan Hillman noted that it is not just enough to change colors. She promised a transformed and modernized transit system in Jackson over the next two years based on different plans already in place.

With nine new buses added to the fleet since 2017, Hillman said, the headache of not having enough buses for the different routes or being unable to go through the day with air conditioning is over.

"We hope to create a brand that will shift us away from those struggles and create a highly visible and modern new image," she said.

By the end of 2020, Hillman said, with four additional hybrid electric buses, the City will mark the transition to low-emission vehicles, "until a point where electric becomes the new standard."

The addition of eight additional hybrid electric buses over the next two years from the $5.5-million grant assures the transformation of the transit system, she said.

Deputy Director of Transportation Christine Welsh said a total of $8 million in grant dollars obtained since 2017 had enabled improvements to the transit system, including the purchase of cameras for the buses to enhance security. Redesigning the bus stops and shelters, with an emphasis on consistency, is planned, she added.

She said the City plans to go back to selling advertising on the buses to generate funds, which had ceased in 2015.