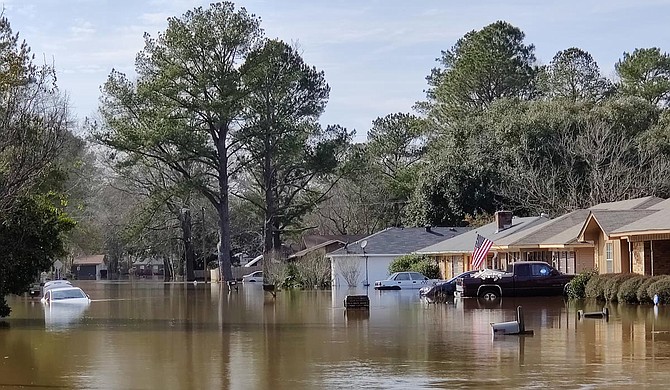 Miles from historic flooding along the Pearl River, west Jackson residents gathered for an update on last month’s flash floods. Public officials provided a bevy of potential solutions—and pitched the “One Lake” plan while they were there. Photo by Nick Judin

As the Pearl River swelled to historic heights on President's Day, flooding neighborhoods in northeast Jackson and forcing residents from their homes, public officials and citizens gathered at the Pearl Street African Methodist Episcopal Church in west Jackson to debate solutions to the flash floods that plagued that community just last month.

But the public meeting quickly turned, in part, into an impromptu pitch for the "One Lake Project," kicked off by enthusiastic speeches from three Hinds County supervisors and Jackson Mayor Chokwe A. Lumumba. The One Lake Project would create a large lake along the Pearl River, promising flood control and valuable  waterfront property for development.

District 1 Supervisor Robert Graham, a member of the Rankin Hinds Pearl River Flood and Drainage Control District Board (Levee Board), introduced the project to the crowd of west Jackson residents there to discuss January's overflowing of Lynch Street Creek, an issue Lumumba acknowledged One Lake "will not provide significant relief for." The One Lake plan, indeed, does not build in flooding relief for Jackson's creeks.

Still, the mayor confirmed his support for the plan. "I think there's been a pretty strong case for the One Lake project in the last week or so," he said. "I would be surprised if that doesn't move forward."

Graham stated that One Lake could have significantly reduced the inundation still surrounding roughly 500 homes in the Jackson area. "The conventional thought is that if it were here and in place, instead of having 300 homes that were damaged and flooding, there'd only be 30," he said.

That hard-to-prove belief is not necessarily conventional, however, for the critics of the One Lake plan, who say the metro must seriously consider several flood-control options. Andrew Whitehurst, water program director at Healthy Gulf, expressed frustration with the narrow scope of Graham's pitch. "He's a member of the board that produced the draft and environmental statement that provided three alternatives—lake dredging, voluntary buyouts and levee improvements," Whitehurst said in an interview. "To leave out how many houses would've been saved by the levees was just a sales pitch for One Lake."

Instead, Graham "needs to explain why he was pitching one of the alternatives, when there are three to be discussed. I'd just like to see an elected official be objective," Whitehurst said. Graham could not be reached for comment before press time.

District 3 Supervisor Credell Calhoun also hawked One Lake as the solution—"We're gonna make Jackson the Mecca of the South"—and District 2 Supervisor David L. Archie made a more direct pitch. "You need to take advantage of this opportunity," Archie said, "because that spells money in and around your community."

Lumumba also endorsed One Lake. The Jackson Free Press asked him about a Mississippi Department of Transportation letter warning that the One Lake Project could cause the "catastrophic failure" of several major bridges in Jackson, including on Interstate 55 and Interstate 20. The mayor ignored the question, instead chiding those concerned about the threat posed to an endangered species of river sturgeon—one of many still-open concerns about One Lake, ranging from costs, to safety, to who will financially benefit from it, to workability.

"It may not be the politically correct thing to say, but I care a lot more about (Jackson residents) than some sturgeon," Lumumba said in response to the question about bridge safety.

Residents' concerns were more immediate. Many stood to speak with the same passion and anger that shone through at last month's meeting immediately after the flash floods that One Lake would not  alleviate, furious with a city they felt had not addressed the clogged creeks primarily to blame for continual flash floods.

Sondra Hatcher-McNeil drew thunderous applause when she described the fear residents face sleeping at night with the threat of water bursting from nearby creeks. "I cannot explain to you how we feel. We are sick and we are tired. If you expect us to stay here, we need help," she said.

Lumumba responded to her concerns directly, promising to "leave no stone unturned" to seek funding to keep the creeks clean. He drew the City's financial woes back to the lack of an enterprise fund, and warned of the difficulty of obtaining easements for maintenance.

The City provided an extensive packet of potential solutions to west Jackson's flash floods, but acknowledged that money to pay for them would be hard to find.

"Our community is solid," cried a resident in the crowd. "We're solid!"

Solid, but in need of help.

Learn more about the One Lake Project at jacksonfreepress.com/pearlriver. Email reporter Nick Judin at [email protected] and follow on Twitter at @nickjudin.