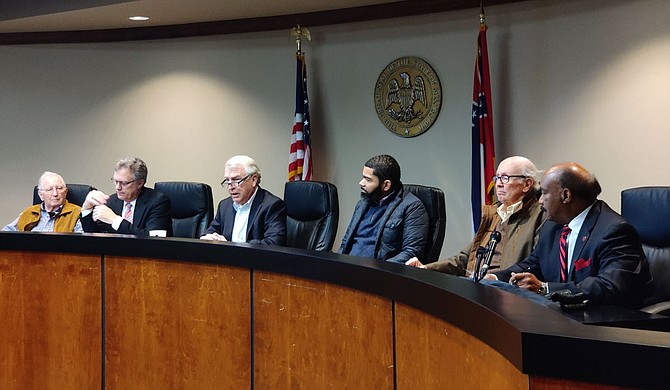 Jackson’s levees served their purpose during recent floods, says the U.S. Army Corps of Engineers. The Levee Board’s eyes, however, are on the One Lake proposal. Photo by Nick Judin.

Acknowledging some minor interior drainage issues, Jordan finished, "In the opinion of the Army Corps of Engineers, the levees will be ready for the spring floods," as long as public officials maintain vigilance.

The topic of the moment was the "One Lake" project, a lake development plan the Levee Board endorses to provide some flood mitigation, although not enough to prevent a 500-year event like the 1979 flood that devastated Jackson.

"It's come to a point where we have to do something," Levee Board President Gary Rhoads said.

As far as the Levee Board is concerned, that something is One Lake, a project to widen the channel of the Pearl River by dredging a span that runs through Jackson, carving out a man-made lake. Its designers promise that it would contain flood waters through Jackson in an event like this weekend's, as well as create lucrative waterfront property along the lake's boundaries.

"I'm glad we're conducting the meeting today. I'm glad we can dispel some of the rumors and some of the myths about the One Lake project," Hinds County District 1 Supervisor Robert Graham, an enthusiastic supporter of the project, said. "There are two things we can do as it relates to flooding and flooding mitigation. We can do something, or we can do nothing."

Blake Mendrop, of Mendrop Engineering Resources, was commissioned by the Levee Board to assist with the environmental draft impact study. At today's meeting, he provided visual mapping of three areas the last week's flooding affected: north Jackson, downtown Jackson and Flowood. Mendrop's data showed more than 220 individual structures the floods affected, and estimated that the same event would have inundated closer to 20 after the completion of One Lake.

For north Jackson specifically, the area hardest hit by the recent floods, Mendrop said of 162 flooded structures, eight would have still flooded with One Lake in place. The engineer acknowledged that the data are preliminary, but expressed confidence in his mapping.

'This Has to Be a Short-range Plan'

Jackson Mayor Chokwe A. Lumumba paused the proceedings to raise the issue of backflow flooding in places like Lynch Street Creek. While these areas, mostly concentrated in west Jackson, did not flood in the most recent event, heavy rains in January overflowed the river's tributaries and forced many residents from their homes. One Lake details released in 2018 made it clear that it would not mitigate creek flooding in Jackson.

"I think that it is important to the position of Jackson residents that we consider (creek flooding)," Lumumba said.

The project's backers said no comprehensive data are available to model how One Lake might lessen backflow and flash floods, but suggested that a lower Pearl River would uniformly assist flooding woes citywide.

U.S. Congressman Bennie Thompson, also in attendance, raised similar concerns. "If you take water from one area, and you affect another area, one of the requirements is mitigation," he said.

After the press conference, Lumumba told the Jackson Free Press he needed more information to make his assessment of the plan's citywide impact. "I think we should be hearing about it as soon as possible," he said.

Graham and Hinds County District 3 Supervisor Credell Calhoun spoke to the Jackson Free Press after the meeting, reiterating that a majority of the Hinds County Board of Supervisors fully supports the One Lake Plan. Asked if the board intended to consider a levee plan the Corps previously endorsed that could also address the city's flooding issues, Graham was direct.

"They can't wait 20 years for us to decide," he said, referring to citizens whose homes had just been inundated. "This can't be a long-range plan. This has to be a short-range plan."

The Corps, however, originally endorsed strengthened levees 22 years ago in 1998, but strong resistance from lake backers has kept the Levee Board from embracing others plans. "Indeed, one of the proponents of the One Lake Project at the Jackson public meeting said, 'the greatest gains we get is by moving the levees back a little and not from the lake,'" wrote Will Selman in a recent opinion piece for the Jackson Free Press.

A spokesman for the Mississippi Department of Transportation confirmed to the Jackson Free Press on Thursday that it stood by Executive Director Melinda McGrath's December 2018 letter, which stated that the One Lake dredging activities would cause the catastrophic failure of nine bridges in the Jackson area: all seven main channel bridges including spans of Interstate 55 and Interstate 20. MDOT requested additional information addressing the plan's impact on the bridges late last year, and still awaits a response.

To Graham and Calhoun, the hundreds of millions of dollars necessary to replace the structurally damaged bridges are no deterrent to the plan.

"We're doing this over and over again," said Graham, referring to the flooding, "We're looking at the human aspect of this as well."