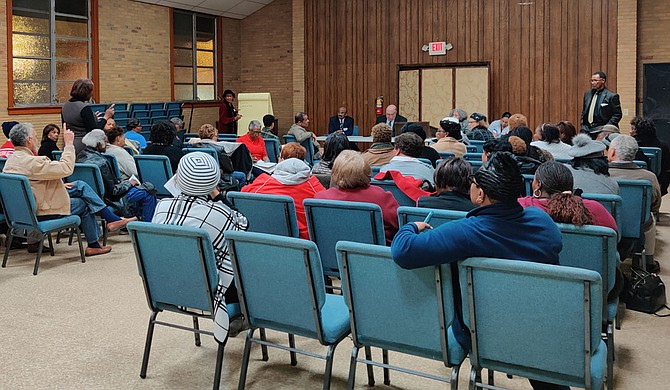 At a tense gathering of west Jacksonians affected by last week's flooding, residents railed against the region's management of its waterways. Photo by Nick Judin

The atmosphere was tense at Pearl Street African Methodist Episcopal Church on Tuesday, Jan. 23, as west Jackson residents gathered to call for state officials to address last week's massive flooding in their community. The meeting filled a small auditorium, as citizens decried a worsening problem that they say the city and county have been chronically unable to solve.

"We can go back to 1979," said ReJohnna Mitchell, emotion rising in her voice. "You want us to show you pictures? You know what it looks like when it floods." She was referring to the massive 1979 flood that devastated Jackson.

"I was not here in 1979," Mississippi state Sen. Sollie Norwood, D-Jackson, answered.

"Well, I was," the resident shot back.

Flash floods struck the city of Jackson last week after storms doused the city in between three to four inches of rain. The Pearl River and its many creeks winding through Jackson neighborhoods overflowed, sweeping away cars and encircling schools, homes and apartments in parts of the capital city. The National Weather Service and city officials alike declared a state of emergency—the Pearl River had not risen so high since the beginning of the millennium.

Norwood promised to take the information residents brought to the city, the county and the state. Other state representatives in attendance included Alyce Clarke, Zakiya Summers and Credell Calhoun, all D-Jackson.

Throughout the night, residents expressed near-unanimous acrimony toward the priorities of metro-area leadership. "We've had streetlights out, and I know we've been hit by flooding, but we've just got so many problems here—when do we get on the 'important' list?" asked one resident. Outside the meeting, traffic was stop-and-go. The streetlight on the Ellis Avenue-Robinson Road intersection was dead.

Repeatedly, attendees asked why vast sums of money are spent in Fondren, a trendy neighborhood north of downtown that attracts many white residents and business owners, while majority-black areas like west Jackson languish. Residents complained of sewer blockages and lax creek maintenance, and spoke to the end of courtesy services meant to assist before, during, and after storms and floods. Many blamed the Pearl River Valley Water Supply District, the state agency that manages the Ross Barnett Reservoir, attributing the flooding to overprotection of waterfront property and wealthy leisure on the reservoir at the cost of homes along the Pearl River and its tributaries.

Jackson's Director of Public Works Bob Miller, also at the meeting, explained the crisis. "Depending on how you measure it, there's been three or four flash floods since the beginning of this year," he said. "They have to manage the water coming in and the water coming out. They're trying to balance two things: how much water can the reservoir hold, and how much can the rivers hold."

John Sigman, general manager at the reservoir's management agency, said later that the reservoir did all it could to prevent flooding. "We do not profess to be a flood-control structure," Sigman told the Jackson Free Press. "During the last event we assured the City of Jackson we'd use all the capacity we had to minimize flood levels, and we did."

To the charge that reservoir management had favored waterfront property over west Jackson, Sigman explained that building code prevents homes from being built below the 300-foot marker, above which the emergency spillways activate. The agency has no control over the waterflow beyond that point, Sigman said. And in anticipation of the rainy season, "Two to four feet is the most we can lower the water" from baseline, he said.

Sen. Norwood told the Jackson Free Press that he would share the information residents provided at the meeting with officials at the state Capitol, in search of solutions. For ReJohnna Mitchell, and for some of the other residents at the meeting, talk is not enough. "I was livid to hear that there was no agenda, no plan of action, no recommendations of a solution. No genuine preparation to address our concerns," she said the day after the meeting.