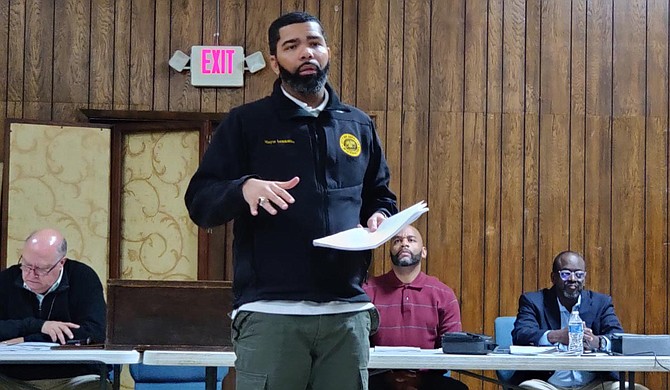 So the flood came. This wasn't quite the one that we have dreaded—it looks like we stayed under a 38-foot crest, thanks to a slight dry spell and what looks like thoughtful management of the Barnett Reservoir—which kept some of the worst things from happening. But this flood was a big-ish one, nonetheless, and many people and businesses in low-lying areas are definitely hurting.

Flood control on the Pearl is something that the Jackson Free Press has kept an eye on for years, as it's been a process riddled with transparency issues and controlled by people who don't always seem to have the public good first and foremost.

Let's start by setting some things straight. First, the Jackson Free Press is not, editorially, against the concept of the One Lake Plan, if it can be shown to do what it's purported to do without a massive negative impact on the environment and human health. We think lakes are pretty, too.

We are, editorially, pretty much against the way that One Lake's ardent supporters have gone about trying to get it done.

We are concerned about three challenges those supporters haven't faced down. The first is the feasibility of the project. From infrastructure hurdles to downstream lawsuits to the funding required, One Lake has significant challenges that haven't been addressed satisfactorily.

The second issue is the distressing lack of transparency from the people who are supposed to be working on this effort. The last we've really heard from them (aside from boosterism) was in the summer of 2018 when they submitted to the public a draft environmental impact statement and proctored a "public comment" period where people weren't allowed to ask public questions of members of the Pearl River Vision Foundation, the nonprofit entity John McGowan formed in 2011 that is currently overseeing planning of the project.

Since that time, U.S. Rep. Bennie Thompson has gone public with 54 questions for the Levee Board, where he also challenged its lack of transparency. The Mississippi Department of Transportation has released a study showing that highway and interstate bridges would likely have to be replaced if One Lake moves ahead.

Legislators from Louisiana have amended federal law over the project, and MDEQ reviews of the One Lake draft study released in 2019 found serious concerns with the environmental impact and health risks of the proposed lake.

The mission statement of the Pearl River Vision Foundation states that it is "... dedicated to nonpartisan research, study and education of a flood control project within the Pearl River basin. ..." But it has no website, no "public education," no meeting minutes, no IRS 990s posted for public view.

The Rankin Hinds Pearl River Flood & Drainage Control District ("Levee Board") has a website (rankinhindsflood district.ms.gov) that appears to be almost completely about promoting One Lake project and doesn't seem to have been updated since that draft EIS process in 2018.

The third problem is the disinformation that some public supporters of the project push. The Easter Flood of 1979 is often called a 500-year event, meaning it has a one-in-500 chance of occurring in any given year. One Lake promises to address a 100-year event, not the Easter flood.   And One Lake could actually make flash floods in Jackson worse, which is some of what we've seen locally in the past month—creeks backing up from torrential rains because the Pearl is too high to accommodate their flow. Be clear: The plan does not mitigate Jackson creek flooding.

Mayor Chokwe A. Lumumba waded into this discussion this week at a west Jackson creek-flooding meeting when he said he's not going "to let a few sturgeon" get in the way of progress on flood control—something he said in response to JFP reporter Nick Judin's question about the MDOT report warning "One Lake" could cause the collapse of highway bridges.

The mayor's comment doesn't reflect, in my opinion, the potential threat to people (and animals and ecosystems) who live downstream of us along the Pearl or in its watershed. Those folks have clearly voiced their concerns and/or put into legislation issues ranging from environmental impact to human health concerns.

The mayor is clearly trying to express support for the people who are experiencing flooding this week. But this isn't (just) about sturgeon, Mr. Mayor. And I sincerely encourage you not to make the One Lake project your "Siemens." Don't panic and sign on to this project until we have considerably more details and real transparency.

As I write this, I'm looking out the window of my office down I-55, and I see the river high out near the I-55/I-20 interchange. Driving around the weekend to document flooding, I was similarly struck by how pretty the nearly flooded Pearl is from I-20 looking north toward downtown. (I also noticed that levee walls, like those proposed by the U.S. Army Corps of Engineers in 1996 and roundly rejected by lake proponents, were able to successfully hold the Pearl in at this height.)

I get that it would be nice for Jackson (and Rankin County) to have a lake-like body of water near downtown. And I really do get that the mayor wishes to express real human indignation and concern for the fate of flooded citizens of his town.

But my suggestion is this: Mr. Mayor, instead of trying to make "One Lake" concerns just about the sturgeon, use your role as a Levee Board member to agitate for more transparency in this process and get us answers to pressing questions. If One Lake is untenable, let's know that sooner and move on to a better option—and we should have several on the table right now.

One could argue that some sort of "lake" proposal spearheaded by John McGowan has actually blocked progress on Pearl River flood control for nearly 24 years. Let's use this week's flood as a wake-up call to make sure an intelligent, workable and people-centered decision to move flood control forward in Jackson doesn't take another quarter-century to get done.

Todd Stauffer is the publisher of the Jackson Free Press. Read more about lake proposals to date at jacksonfreepress.com/pearlriver.