One Lake a ‘Game Changer'? 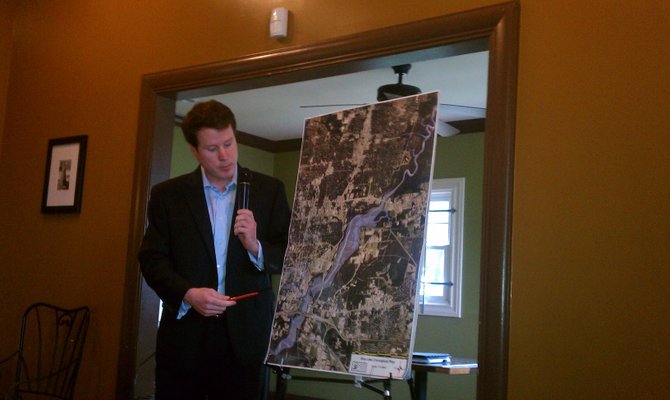 Turtles like the proposed "One Lake" flood-control plan. Now developers just have to convince the U.S. Corps of Engineers and Jackson area residents who'll be affected.

Dallas Quinn, of the Pearl River Vision Foundation and John McGowan Working Partners, updated residents on the developments for One Lake, the latest iteration in a series of flood-control proposals over the years, this morning at Koinonia Coffee House's Friday Forum.

Previous plans failed because developers met funding roadblocks or opposition from environmental groups concerned about negative impacts to wetlands and protected species such as the gulf sturgeon and ringed sawback turtle, among other issues.

"It's been proven that the turtle likes the lake better than he likes the river," Quinn said. In studies unrelated to One Lake, the U.S. Army Corps of Engineers determined that the rise and fall of rivers could harm the turtles' habitat, he said. The sturgeon, Quinn added, don't migrate as far north as Jackson any more.

Residents in the Jackson area might be harder to sell on the plan than a hard-shelled reptile, however.

Government officials have grappled with how to control flooding along the Pearl River for years without success. In the Easter flood of 1979, the river swelled to 25 feet above flood stage, displacing 17,000 people and causing $500 million in damage. In today's money, the same flood would wreak $1.6 billion in economic losses. Just four years later, a less severe flood caused $220 million in damage.

The floods spurred a tide of flood-control proposals over the years. In the late 1990s, oilman John McGowan rolled out his Two Lakes plan and proposed that economic development would fund the project. Two Lakes proved controversial because it would have destroyed wetlands and flooded Mayes Lake while the Corps warned that the project would be extremely costly.

Planners eventually scrapped Two Lakes in favor of a scaled down one-lake vision, a 1,500-acre six-mile-long lake from Lakeland Drive south to the town of Richland. Gary Walker, project manager for the Army Corps of Engineers' Vicksburg district, recently told members of the Rankin-Hinds Pearl River Flood and Drainage Control District (Levee Board) that One Lake did appear to have some flood-control benefits and, Quinn added, doesn't affect "high-quality" wetlands.

The Levee Board has an agreement with McGowan's group to complete a feasibility study, which must consider alternatives. These include a "do nothing" option as well as all the previous ill-fated plans, including Two Lakes, Quinn said.

Officials in Washington D.C. must approve a contract between the Levee Board and Corps of Engineers. Once that memorandum of understanding is in place, the feasibility and environmental impact studies could take 12 to 18 months to complete, Quinn said.

The next steps would include launching public awareness and public-relations campaigns to build community support, he said.

The newest plan features a lake and canal in downtown, similar to Oklahoma City's Bricktown development. Quinn said the development could create 600 jobs immediately and put Jackson on the road to becoming a destination.

"This will be a game changer," Quinn said.

Read more about Two Lakes and other Pearl River proposals at http://www.jacksonfreepress.com/index.php/pearlriver/.