Did Lake Money Dry Up? 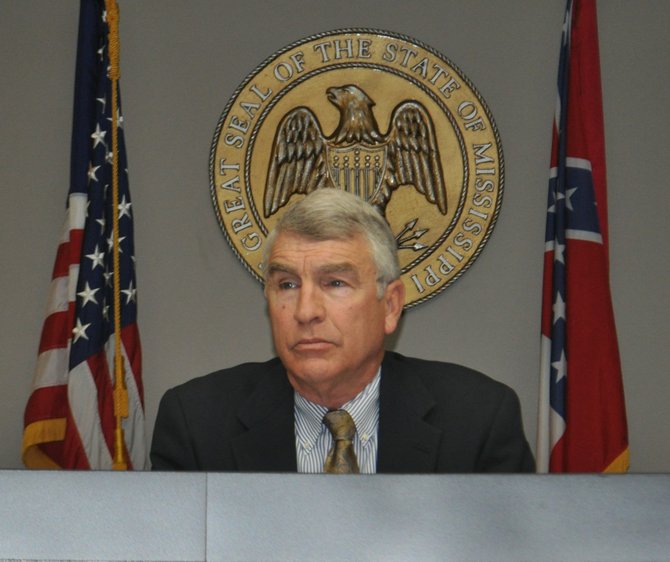 Levee Board President Gary Rhoads wants to know if there is any U.S. Corps of Engineers money left over from a previous "two lake" to help out with drafting a new flood control plan. Photo by Trip Burns.

Rankin-Hinds Pearl River Flood and Drainage Control District officials are scratching their heads trying to locate funds set aside to help develop a flood-control plan for the Pearl River.

Gary Rhoads, Flowood mayor and the Levee Board's president, said the U.S. Army Corps of Engineers had set aside funds for a flood-control study, and was curious how much money was left over.

Levee Board officials aren't sure of how much, but they say Congress originally put the money in the Corps' budget to study a dual lake that planners scrapped in favor of a more modest one-lake proposal amid cost and complaints from conservationists.

The Levee Board and nonprofit Pearl River Vision Foundation are drafting a plan to reduce flooding along the Pearl River. PRVF, started by local oil magnate John McGowan and backed by his business partners, agreed in 2011 to pay for the study.

At an Oct. 8 Levee Board meeting, officials said they were seeking clarification on precisely how much the Corps had left over for the development. Board attorney Keith Turner estimates that somewhere around $200,000 left over after the Corps drafted several recent agreements for the Levee Board.

But Kavanaugh Breazeale, spokesman for the Corps' Vicksburg office, told the Jackson Free Press Monday afternoon there wasn't any money left over.

"They are strictly on their own. We've given them permission, and we're stepping away," Breazeale said.

Dallas Quinn, spokesman for the Pearl River Vision Foundation, which is organizing and paying for the study for the Levee Board, said even if PRVF doesn't have access to the Corps funding, it's won't be a substantial hurdle.

A previous two-lakes plan was scuttled due to costs, concern over eminent domain and because environmentalists said building the lakes would wreak environmental havoc on the river's ecosystem, promising years of lawsuits before the project could come to fruition.

Robert Jones, a biologist at the Mississippi Museum of Natural Science, said in 2006 that the target area also contained endangered species, including the ringed sawback turtle, which is indigenous only to the sections of the Pearl River in Jackson and south of the city. The species does not proliferate in the northern tributaries of the river.

Likewise, the Gulf sturgeon, a 200-million-year-old subspecies of the Atlantic sturgeon, also live in the area, and are have been listed as "threatened" under the United States Endangered Species Act since 1991.

Dallas Quinn, a spokesman for PRVF, said the price tag for the environmental impact assessment that federal law requires to study one lake and other alternatives would cost around $2 million.

PRVF got a boost from the Greater Jackson Chamber Partnership in the form of a $200,000 donation toward the group's efforts, for which Quinn said the group is thankful. The chamber made the one-lake project, which calls for building 1,500-acre lake along the Pearl offering lakefront development opportunities, central to its 10-year strategic economic development plan called "Vision 2022/One Voice."

At the Oct. 8 meeting, Levee Board member Socrates Garrett pressed PRVF officials if the funding was in place to complete the EIS, which could take up to 18 months. In addition to paying for the study itself, the Levee Board also has to cover the Corps' costs to review PRVF's work.

Quinn added that said PRVF has developed an 18-month schedule that will be posted online for the public to view.

Quinn told the Levee Board that going forward one of the group's largest obstacles will be securing $133 million that Congress authorized but never appropriated to help pay for the lake's construction.

Clarification 10/17/2012: This story has been updated to reflect a clarification. A previous version that ran online and in the print edition stated the U.S. Army Corps of Engineers used money set aside for a Pearl River flood plan on legal fees. However, the money was spent drafting agreements that may or may not have been legal in nature.

I thought with the money coming from the Chamber, lakefront property owners, counties, banks, federal treasury, and the Vision foundation...that it was shovel ready. I say just set back the riparian development a safe distance from the natural floodplain and let the river be.