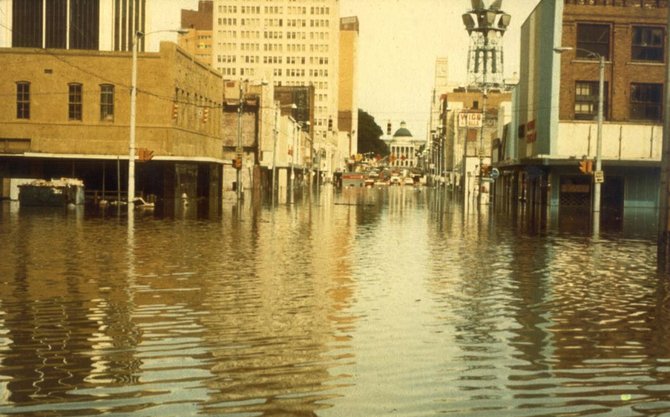 The flood stage for the Pearl River near Jackson is 28 feet. Currently, at just over 33 feet, the river doesn't come close to the Easter Flood of 1979, when the river swelled over 43 feet, flooding downtown Jackson and causing more than $1 billion in damage as calculated in today's money.

But recent flooding has highlighted the urgency to address Jackson's longstanding problems with flooding, as well as its aging sewer system that led to a roughly $400 million EPA consent decree.

The rising Pearl River has seeped into the sewer system, producing a mix of wastewater and river water in holding ponds near the Mississippi State Fairgrounds, Rankin-Hinds Pearl River Flood and Drainage Control District (Levee Board) maintenance director Gary Miller said at yesterday's board meeting.

Jackson has not had representation on the Levee Board since the death of Mayor Chokwe Lumumba, but city public-works crews have worked with levee officials by providing four pumps for the fairgrounds ponding facility.

"We are out there constantly looking after this," Miller said Monday.

The flood stage for the Pearl River near Jackson is 28 feet. Currently, at just over 33 feet, the river doesn't come close to the Easter Flood of 1979, when the river swelled over 43 feet, flooding downtown Jackson and causing more than $1 billion in damage as calculated in today's money.

Since early 2013, Jackson has been under a consent decree imposed by the U.S. Environmental Protection Agency and Justice Departments that will force the city to make a range of improvements to its sewer and drainage systems. Federal authorities had found that Jackson had pumped billions of gallons of insufficiently treated waste water into the Pearl River.

In Lumumba's first budget, he proposed hefty rate hikes on water customers to help offset the $400 million in needed repairs. In the meantime, a flood-control plan remains in development. After a number of false starts that included a plan to construct dual lakes just south of the Ross Barnett Reservoir, the Levee Board, municipalities adjacent to the river and the nonprofit Pearl River Vision Foundation are close to finalizing a plan they hope will pass muster.

Dallas Quinn, spokesman for PRVF—which oil businessman John McGowan founded—said the organization expects to have a draft of the required environmental-impact study completed by June.

Quinn said the plan would "convey water through Jackson in a matter that does not flood any homes or businesses in the metro or does not increase flooding downstream." PRVF will present three plans—what Quinn called a channel-clearing plan (otherwise known as "One Lake"), an enhanced levee plan, and a so-called "do-nothing" option, which federal regulations require—to the U.S. Army Corps of Engineers. He said building up the levees could increase flooding in communities downstream, while the lake would not.

The Levee Board and PRVF plan to present a draft plan by June, when the public and government agencies will have an opportunity to comment. Quinn said he expects a final plan to be completed by the end of the year.