MDA Ponies Up $1 Million for ‘One Lake’ 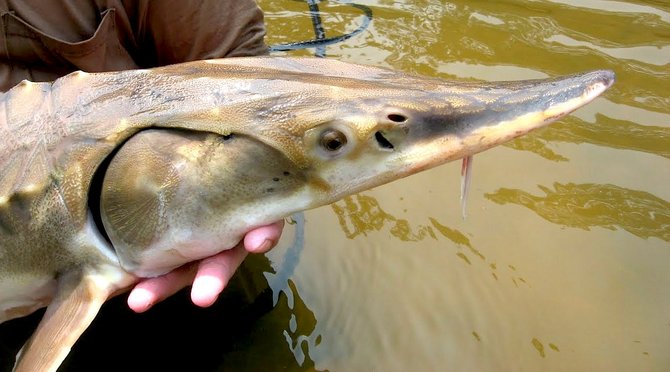 Developers of a flood-control project will have to demonstrate that the plan does not violate federal laws that protect such endangered species such the Gulf sturgeon. Photo by Courtesy U.S. Fish and Wildlife Service

Two years ago, after John McGowan's flood-control plan known as "Two Lakes" went down in flames, the longtime oil magnate and sometimes developer retooled his dream for a waterfront development that would hopefully protect Jackson from floods and provide an economic boon for the city.

As an added bonus for the members of the Rankin-Hinds Pearl River Flood and Drainage Control District—aka the Levee Board—which manages the Pearl's levees in those two counties and was fiercely divided over Two Lakes, McGowan offered to foot the bill for a feasibility study on the revised plan.

"It's not going to be local taxpayer money," said Flowood Mayor Gary Rhoads, who is also the current president of the Levee Board.

Now it appears that Mississippi taxpayers do have skin in Jackson's flood-control game. In May, without so much as a press release announcing it, the Mississippi Development Authority gave the Levee Board a $1 million grant for the flood-control study that McGowan-backed nonprofit Pearl River Vision Foundation is putting together.

"With Jackson being the capital city, they wanted to help provide some of the funding for the feasibility study for the one-lake project," Gelston told the Jackson Free Press during an Aug. 9 telephone interview.

Gelston added: "That's something that the state rarely does ... This is an extraordinary economic-development opportunity for the city, the governor agreed via MDA to provide the project with $1 million that will go directly for engineering and feasibility costs related directly to preparing a plan."

The grant consists of "all state money," Gelston said, not federal pass-through grants. As the state's primary economic-development agency, MDA, charged with recruiting new businesses and helping existing businesses grow, has a $21 million budget. Gelston said the agency would only reimburse the Jackson lake project for what the agency deems "eligible expenses," which include engineering and environmental studies.

In a conference call with PRVF spokesman Dallas Quinn and Levee Board attorney Keith Turner, Quinn said the study McGowan offered to pay for was an initial hydrologic survey, which the foundation concluded in late 2011. That analysis showed that a proposed 1,500-acre six-mile-long lake from Lakeland Drive south to the town of Richland might have some flood-control benefits.

Since receiving the MDA grant, the Levee Board has reimbursed PRVF more than $200,000 in expenses for engineering work on the environmental-impact assessment required under the National Environmental Policy Act (NEPA).

At the Levee Board's monthly meeting Aug. 12, the board approved an invoice for $48,578.38, which PRVF paid out to three subconsultants: Jackson-based SOL Engineering, Moon Township, Pa.-based Michael Baker Corp. and Blake Mendrop of Ridgeland-based Mendrop Engineering Resources. Previously, the board had approved approximately $180,000 in reimbursements to PRVF.

The study should cost approximately $2 million to complete, Quinn said. In addition to the money from MDA, the Greater Jackson Chamber Partnership awarded PRVF $200,000 in October 2012. Even though PRVF has been conducting preliminary studies for nearly two years, the project was not official until July 25 of this year, when the Corps, a division of the U.S. Defense Department, published a notice of intent to prepare a draft environmental-impact assessment in the Federal Register.

Quinn said the foundation is considering a number of alternatives in its analysis, including a one-lake plan, a plan to expand the levees and a so-called "do nothing" plan.

"We're looking at all these different variations, and the selected plan is going to come from this analysis," Quinn told Levee Board members recently.

Flood control has worried many Jacksonians, and been a stone in the shoe of local policymakers since two floods, in spring 1979 and again in 1983, displaced thousands of people and damaged property that, in today's dollars, would top $1 billion. Ever since, groups have floated a procession of flood plans, each one dying on the vine.

The Two Lakes plan is a recent example. McGowan Working Partners, some of whom owned land in the proposed project footprint, advocated building lakes on the Pearl that would have inundated Mayes Lake, located in LaFleur's Bluff State Park in Jackson, and a portion of its surrounding land.

Opponents to the Two Lakes plan said it would cost too much and disrupt the Pearl's fragile ecology, which includes the presence of the endangered ringed sawback turtle and the Gulf sturgeon.

The Levee Board and PRVF will hold a meeting at the end of the month to address local citizens' concerns. The meeting is Aug. 29 at 6 p.m. at the Mississippi Agriculture and Forestry Museum (1150 Lakeland Drive, 601-432-4500).

Citizens can make oral comments at the event and submit comments through the mail and a website that PRVF plans to launch in time for the meeting.

Note 8/23/2013: After the story ran, Laura Hipp, communications director for Lt. Gov. Reeves, emailed the Jackson Free to clarify that Reeves did not speak with Gov. Phil Bryant about the proposed 'One Lake' plan as stated by MDA's Kathy Gelston.