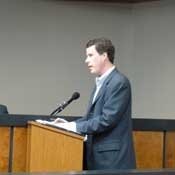 The Rankin-Hinds Pearl River Flood and Drainage Control District has been working in concert with the not-for-profit Pearl River Vision Foundation, which assists and represents the Levee Board in negotiations with the U.S. Army Corps of Engineers, toward updating the Pearl River's flood-control plan.

The non-profit, backed by McGowan Working Partners founder John McGowan, has been studying the feasibility of one lake, including any possible environmental impacts.

PRVF will present its preliminary analysis to the Levee Board at the body's Dec. 12 meeting. If board members sign off, the plan goes to Vicksburg and the U.S. Army Corps of Engineers for approval.

"We're glad we're moving along as expeditiously as possible," said Quinn, who is also a consultant for McGowan Working Partners.

McGowan has long advocated for creation of lakes on the Pearl, but debated with the board for years on the possibility of two lakes, not just one. McGowan's original plan would have partially inundated neighboring Mayes Lake and a portion of its surrounding park. Board members eventually came to an agreement on a lake plan to put to the Corps, which must still approve the plan. Until recently, the Corps remained a steadfast opponent to the idea of any new lake in the Pearl for environmental reasons.

Earlier this year, McGowan's earlier Two Lakes of Mississippi Foundation was retooled into the Pearl River Vision Foundation, and the Levee Board voted to get behind the new compromise plan. McGowan has told the Jackson Free Press that the new plan would allow the second lake to be added to the north of the one-lake plan at a later date, should there be the will to do it at a later time.

Section 211 of the federal Water Resources Development Act of 1996 requires four steps for a Corps-directed civil-works project such as that envisioned by the Pearl River Vision Foundation. The foundation is working with the Levee Board to operate as what federal law calls a "nonfederal sponsor" to share a portion of study and construction costs, as well as operation and maintenance expenses once the project is completed.

The Corps agreed to the Levee Board's wishes late last year and decided to include the lake component in a plan that could consist of a levee expansion north of Lakeland Drive and another expansion near the town of Richland. Gary Walker, U.S. Army Corps of Engineers senior project manager, told the board this year that the plan to study the flood-control project could jump to $4 million, nearly doubling the plan's original $2.2 million estimate the Corps provided to the board last year.

The caption was corrected.

I wonder what the fall-back plan would b 4 the Mayor & City of Jackson should the plan not live up 2 the flood or re-development goals. Methinks that the citizens & taxpayers would have 2 pick up the operation & costly maintenance. The River vision folk would have made their profit and at least have been successful in their 'back up' goal...reforming the river 2 their preference.