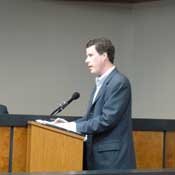 Dallas Quinn, spokesman for McGowan Working Partners, said a McGowan-backed non-profit will pay for half of an estimated $4-million study focusing on Pearl River flood control.

Flowood Mayor Gary Rhoads says the Rankin-Hinds Pearl River Flood and Drainage Control District (aka the Levee Board) is working with a non-profit foundation backed by McGowan Working Partners for one reason: cash.

"They can orchestrate (a deal) for us without being on the taxpayer's back. That's the bottom line. It's all about money," said Rhoads, chairman of the Levee Board. "It's not going to be local taxpayer money."

Last month, the Levee Board entered into a resolution with the McGowan-backed Pearl River Vision Foundation, which proposes to "assist and represent" the Levee Board in negotiations with the U.S. Army Corps of Engineers in creating an updated flood-control plan for the Pearl River.

Like the Foundation, a majority of the Levee Board wants that plan to include a new lake, created by dredging the river and installing an underwater dam. The board believes a properly dredged lake can theoretically be big enough to contain floodwater comparable to the historic Pearl River flood of 1979.

McGowan Working Partners founder John McGowan embraced the Levee Board's "one-lake" plan earlier this year. McGowan has long advocated for creation of lakes on the Pearl, but debated with the board for years on the possibility of two lakes, not just one. McGowan's original plan would have partially inundated neighboring Mayes Lake and a portion of its surrounding park. Board members eventually came to an agreement on a lake plan to put to the Corps, which must still approve the plan. Until recently, the Corps remained a steadfast opponent to the idea of any new lake in the Pearl for environmental reasons.

The Corps agreed to the Levee Board's wishes late last year and decided to include the lake component in a plan that could consist of a levee expansion north of Lakeland Drive and another expansion near the town of Richland. Gary Walker, U.S. Army Corps of Engineers senior project manager, told the board this year that the plan to study the flood-control project could jump to $4 million, nearly doubling the plan's original $2.2 million estimate the Corps provided to the board last year.

Clearly frustrated, members of the board questioned how they would manage to pay the board's half of the cost. The Corps is responsible for the other half.

"We've done spent money from Hinds and Rankin counties, and now the Corps has come back with a plan that'll cost us $4 million. But the problem is we have to raise $2 million locally," Rhoads said this week.

McGowan Working Partners spokesman Dallas Quinn said he did not think the cost of the district's half would be $2 million, but said the Foundation would "complete the work."

McGowan's representatives were before the board last month, offering to lend a hand: "You heard (Walker) say it could be three years to conduct the (flood control) study, and another two years to complete the funding. That puts us at five years before we'd even know we could start building," Quinn said. "We propose this team of engineers, consultants and attorneys to sit down with the Corps and the board and negotiate (the flood-control plan), and look at any other alternative (funding) routes to move this forward."

One of those potential funding routes makes use of Section 211 of the federal Water Resources Development Act of 1996, which provides authority for non-federal sponsors, like the Levee Board, to begin the design and construction of flood-control projects without a federal co-payment. The section makes possible reimbursement for the federal government's share at a later date.

McGowan has advocated for a larger lake as a later addition to the initial smaller lake, but is not actively pressing for the second lake at the moment. More recently, he has argued for the removal of the levee-expansion component of the single lake plan. The new levees would make later expansion of the lake, or adding a second lake, difficult.

Levee Board attorney Keith Turner said the most recent lake maps formally endorsed by the Levee Board, and submitted by Waggoner Engineering, depict expanded levees girding several lake alternatives averaging in size of between 255 to 260 feet above sea level. The Pearl River Vision Foundation presented its own map before the board in April, but would not provide a copy of the map to the Levee Board or to the Jackson Free Press. Quinn did not say if the foundation lake design contained a levee expansion.

Turner and Quinn say the initial design, regardless of the inclusion of levees, is likely a moot point because the lake that survives federal review may look nothing like the initial design. This is because an agreement between the Corps and the Levee Board (and its Foundation surrogate) does not exempt the flood-control proposal from federal environmental laws. The project, despite its non-profit funding source, must still abide by the National Environmental Policy Act. Also, the district will not be eligible for reimbursement unless the Corps approves the lake plan. Peer review by affiliate members of the Corps is necessary for projects costing more than $45 million.

The Levee Board has no clear cost for the lake, but has cited estimates as high as $600 million. McGowan claims the lake will cost considerably less than that, but has posted no estimates below the $45 million cap for peer review. The levees will likely be a component of the plan if the Corps sticks to its demands of levee inclusion for flood control.