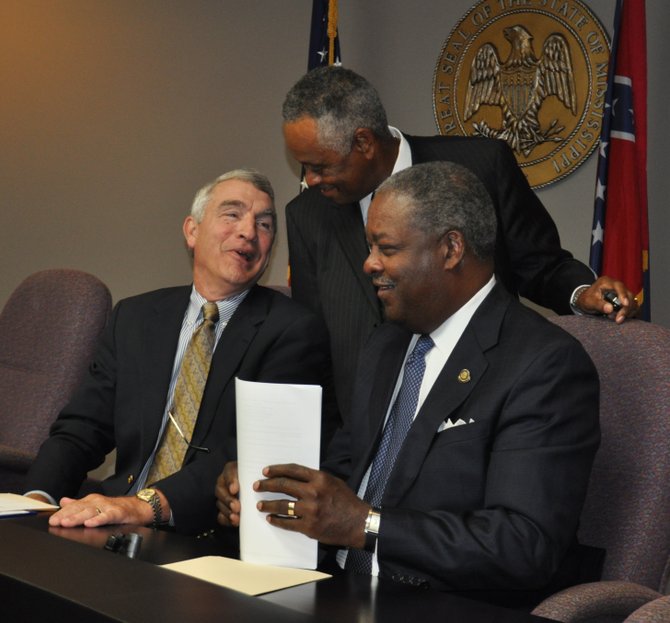 The two-dozen officials representing various government and civic agencies couldn't decide on which song was best suited for the signing of a document that enables work on a long-awaited flood-control project to begin in earnest.

Gary Rhoads, the mayor of Flowood and president of the Rankin-Hinds Pearl River Flood and Drainage Control District, aka the Levee Board, suggested the group sing a chord or two of "Kumbaya."

Either song would have been apropos. Monday's ceremonial signing--Rhoads officially signed the document weeks ago--of an agreement between the Levee Board and the U.S. Army Corps of Engineers lets local officials move forward with developing a flood-reduction plan.

The Pearl River Vision Foundation, a not-for-profit association started by Jackson oil magnate John McGowan, will conduct the study on the Levee Board's behalf as well as foot the bill.

"They've got the motivation and, evidently, the financial capability," Rhoads said of PRVF's financing of the study.

Without the agreement, the process could take three or fours years and cost twice as much, board attorney Keith Turner said. Rhoads added that getting the agreement in place represents the end of three decades worth of worry over flooding along the Pearl River.

In spring 1979, the river swelled 25 feet over flood stage, prompting a series of proposals over the years, including expanding the levees and the development of a lake system.

The Corps and conservationists panned McGowan's initial two-lake vision that would offset construction costs through real estate and other economic-development activities, calling that plan environmentally damaging and cost prohibitive.

The ensuing controversies around "Two Lakes," which included shouting matches and allegations of ethics violations, could have earned Mississippi's capital-city area the reputation of hosting the most raucous flood-and-drainage-control district meetings in the nation. Eventually, the Levee Board scrapped "Two Lakes" in favor of a more modest 1,500-acre, six-mile-long single lake, starting at Lakeland Drive and stretching south to Richland.

"We've been, for many years, trying to push forward this notion of flood protection for our region, and this is a big step forward in that direction," Johnson said after the meeting.

Johnson, who had been skeptical about the McGowan group's Two Lakes plan, added that his administration is 100 percent on board the One Lake idea, which also offers economic and recreational development potential for the city.

Dallas Quinn, PRVF's spokesman, said that the organization plans to hold a public meeting within 90 days to solicit input on the project, which must comply with the National Environmental Policy Act, or NEPA. In addition to taking public comments, NEPA requires that all flood-control alternatives--including two-lake, levee and do-nothing plans--be considered.

McGowan said that any economic-development efforts associated with the flood-control project would hinge on the findings of the environmental study, but added that he does not foresee the obstacles that held the project up this long being a problem going forward.

"I think everybody's together on this particular plan," McGowan said.