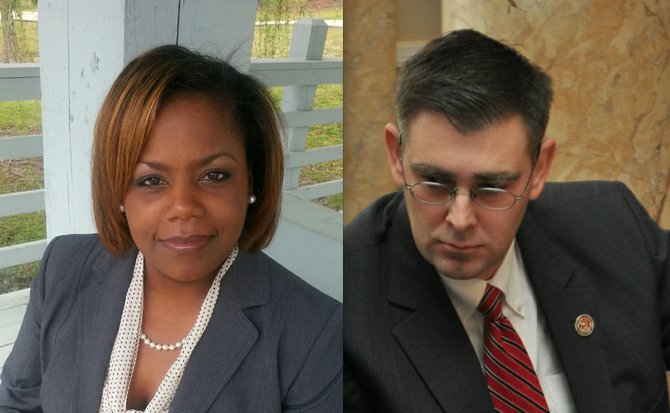 Jennifer-Riley Collins (left), executive director of the ACLU of Mississippi, believes the so-called Religious Freedom Restoration Act holds open the potential for legalized discrimination despite the House's removal of a controversial provision. Republican Rep. Andy Gipson of Braxton (right) maintains the bill protects religious rights and should be further studied.

Despite their best efforts to whip up enough votes for passage, supporters of the controversial Religious Freedom Restoration Act, or RFRA, proposal had to change course late Wednesday, just before a critical legislative deadline.

The Mississippi House of Representatives passed the RFRA—Senate Bill 2681—proposal 80 to 37 after its Republican sponsors, in a face-saving move, amended it to create a legislative study panel. The amended bill keeps a provision that would add the phrase "In God We Trust" into the state seal, but removes controversial language that civil-liberties groups argued could clear the way for Jim Crow-style legalized discrimination.

After dispensing with most other items on the calendar, the House went into a series of recesses in an apparent attempt for the Republican leadership to convince fellow Republicans to support the bill. When it became clear that the votes were not there, Rep. Andy Gipson, R-Braxton, offered the study committee as an alternative.

"It is our First Amendment right to worship the God we want to worship," said Gipson, who added that protecting that right was too important to outright kill SB 2681.

"We need a well-reasoned bill that protects our religious freedom," Gipson said.

The study committee will consist of the House and Senate Judiciary committees, and is required to have its first meeting no later than June 1 and have at least three meetings total, which would be open to the public; the bill also requires the committee to submit a report of its findings by the end of 2014.

However, some speculation exists that supporters of SB 2681 will try to complete the process before the conclusion of the legislative session in early April. House Speaker Philip Gunn, R-Clinton, endorsed the call for more study, saying that the House's own attorneys had "differing views as to the legal impact of this bill."

Pressure has been building on Mississippi lawmakers since the original bill passed the Mississippi Senate on Jan. 31. It was similar to a measure that Arizona Gov. Jan Brewer vetoed last week. Critics said the Arizona measure could lead to discrimination against gay people and other groups by, for example, allowing a baker to refuse to make a cake for a same-sex couple.

Gipson's proposal said government cannot put a substantial burden on the practice of religion without a compelling reason. It said a person whose religious practice has been, or is likely to be, substantially burdened may cite that violation in either suing others or as a defense against a lawsuit.

The ACLU of Mississippi and other SB 2681 opponents are still against the bill, arguing that it is vaguely worded and subject to broad interpretation.

"The ACLU of Mississippi remains concerned that the status of SB 2681 continues to open the door to discrimination against any group based on religious objections. The study does no more than keep this potential license to discriminate alive," Jennifer A. Riley-Collins, executive director of the state chapter of the ACLU, said in an emailed statement to the press yesterday.

"I hope at the end of the process, this bill doesn't turn into something else," Espy said.

The state Senate passed House Bill 49, which would require testing for adults whose answers on an application for Temporary Assistance for Needy Families indicate possible drug use. The House passed the bill earlier.

"The TANF program is a safety net for families in need, and adding this screening process will aid adults who are trapped in a dependency lifestyle so they can better provide for their children," Bryant said in a statement welcoming its passage. "This measure will help make a positive difference for families impacted by substance abuse."

TANF is a government program that provides money to low-income families with children up to age 18. A person who tests positive for drugs would be required to undergo treatment and pass future tests to keep TANF benefits. Anyone who doesn't follow the rules can't reapply for 90 days after the first lapse and for a year after the second one.

The Mississippi Department of Human Services' annual report says that for the 2013 budget year, which ended June 30, the average monthly payment to a family receiving TANF was $140 and the average payment to an individual was $67. The report said that in June, 9,563 families received TANF payments.

Utah started a drug-testing program for welfare recipients in 2012. A state agency found that the state spent $30,000 the first year and found 12 people who tested positive for drug use. Bryant has said he believes Mississippi would run a program for a similar amount of money.

Opponents say the bill could deny money to poor children whose parents are scared away by the rules. They also say it's a waste of money because few drug users are likely to be found.

"If you think that's a fiscally conservative, sound use of money, then you need to vote for this bill," said state Sen. David Blount, D-Jackson, an opponent.

On Dec. 31, a federal judge ruled that Florida's law requiring drug testing for welfare applicants is unconstitutional and shouldn't be enforced. U.S. District Judge Mary Scriven wrote that a pervasive drug problem does not exist among TANF applicants.

A narrowed version of a special-education voucher bill for Mississippi students is moving ahead as well.

The measure would give debit cards with more than $6,000 on them to parents who withdraw their special education students from public schools. The money could be spent on private-school tuition or private tutoring services.

The Senate passed House Bill 765 on a 26-22 vote Wednesday. But House and Senate members would have to work out their differences before the bill could become law.

"Above all, this bill is intended to give a lifeline to parents," said Sen. Nancy Collins, R-Tupelo. "It's clear that some schools are not meeting their needs."

While some special-education advocates support the bill, others don't, saying leaving public schools would reduce pressure for improvements for the much larger number of students who would remain behind.

"I just question whether this is the right approach at all," said Sen. Hob Bryan, D-Amory.

Since the Senate last considered the bill, it's been amended to ban the use of money for homeschooling, meaning vouchers could only be used for private schooling or for tutoring and therapy.

It would also not allow use of the money for certain students who don't have an individual education plan but are considered to have disabilities under federal law. Collins said the cards could only be used at schools and businesses that the state Department of Education had preapproved.

The bills cover students who are currently enrolled in public schools, or are enrolling in elementary or high school for the first time, if they have an individualized education program. Mississippi has 66,000 students who have individualized education plans provided for under the federal Individuals with Disabilities Education Act, with 56,000 of those in grades above kindergarten.

Critics complain that a student would get a full per-student share of the Mississippi Adequate Education Program at a time when lawmakers are not fully funding that formula for public school students.

"We're taking money out of the public schools, and I have a problem with that," said Sen. Kelvin Butler, D-McComb.

Collins said the money would be appropriated separately, and not come from the normal school funding formula.

Sen. David Blount, D-Jackson, offered an amendment to ban spending money at religious schools, saying it violates the state Constitution's ban on that kind of spending. That amendment was rejected.

"A parent is the best person to judge what's best for their child but we are the best judge of how to spend public money," Blount told voucher-supporter Sen. Michael Watson, R-Pascagoula, during debate.

This is the thinking that keeps us on the top of all things that are BAD!