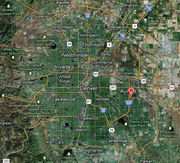 Holmes has been identified as a white American male. The shooting took place early Friday morning at a premiere for the Batman film, "The Dark Knight Rises."

President Barack Obama said he was "shocked and saddened" by the tragedy. Obama canceled a Florida campaign event and said that he would address the nation later this morning.

The story is developing. Check back for updates.