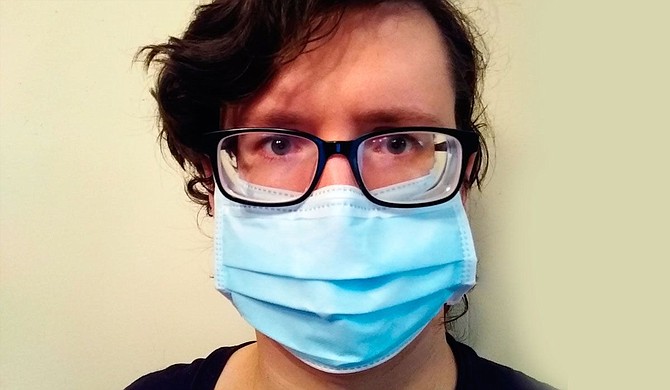 Eric Bennett stocks the shelves at a Shopper’s Value market in Clinton. While he sees the attempts at social distancing manifesting all around him, he says elements of daily life make full isolation impossible. Photo courtesy Eric Bennett

Alex Marten is tired. You can see it in his eyes, surrounded by the telltale wrinkles of his unending shifts bundled in protective gear. You can hear it in his voice, no more clearly than when he responds to the elegiac praise politicians and corporate brands heap on health-care professionals like him in the days of coronavirus. “It’s a token,” he says curtly, “a way to show appreciation without doing anything to help us.”

Marten, who asked not to be identified by his real name, is a nurse at a Mississippi hospital with several confirmed cases of COVID-19. He spoke to the Jackson Free Press about the experience of being an essential worker, exempted from the shelter-at-home order to care for patients in one of the highest risk environments in the nation today.

“It’s personal for us,” he admits, speaking of his wife. As the novel coronavirus approached, they had to make the decision to send their infant son to stay with family.

Marten’s decision-making operates around the calculus of the present moment. “We don’t want to become a drain on resources rather than an asset,” he said. Still, knows he is lucky to be insulated from the economic crisis that trails COVID-19. “I am thankful I have a job—I know a lot of people aren’t even able to work right now. At a minimum, the financial stuff, we should be sheltered from that.”

At Alex Marten’s hospital, which he declined to name, personal protective equipment is heavily rationed: nurses stretch out single-use masks for a week’s worth of shifts. Marten sees the structure of our health-care system as the source of the impending calamity. “It’s painfully obvious that no one was prepared for an event like this. Because hospitals don’t want to keep a supply of medical equipment that doesn’t see an immediate use,” he explained.

The phenomenon of “just in time” management applies to far more than hospitals; it is a cost-cutting approach that attempts to finely synchronize supply and demand to reduce overhead costs to a sliver. “It’s like running a Walmart,” Marten said. “You stock what you’re expected to use in a given timeframe. But that can’t prepare you for unforeseen circumstances.”

This leaves hospitals in a terrible position to fight off a pandemic that calls for masses of protective gear, ventilators, hospital beds and trained medical professionals, Marten says, adding that he doesn’t have much hope for a market solution.

“We are, on a business level, so used to operating on razor-thin margins, that we’re unprepared for these catastrophes,” he said.

Marten worries that hospital administration is too removed to make critical choices. “The people that are making all of these business decisions aren’t the ones who are in the patients’ rooms, giving the care. They’re getting their information from middle-management,” Marten said. They, too, lack a clear picture of what health-care workers need, he added.

To Marten, the problem is structural, and requires a structural solution. But individuals can do one small thing to make the work day easier. “People do appreciate offers of food. Safe, catered food is a big morale boost,” the nurse said.

Eric Bennett works as a stocker at the Shopper’s Value market in Clinton. Three days a week, he joins his fellow essential workers in breaking down new shipments of food supplies and placing them on shelves, usually as crowds mill past for daily shopping. Bennett said in an interview that he has mostly remained calm through the pandemic, with some anxious moments.

“There was a point when the first announcements went out that we could potentially end up quarantined, and all the panic buying happened,” Bennett said. “They had to start scheduling employees much more aggressively. That was my biggest fear. The more I had to be up there, the more likely I was to get sick. And if I got sick, my parents were going to get sick.”

Over the weekend, The Washington Post reported that the U.S. has discovered the novel coronavirus in more than 1,500 supermarket employees since the beginning of the crisis, with thousands more quarantined after possible exposures. Commercial unions are fighting for recognition of their food-service and grocery-store employees as first responders, in the hopes that this will give them priority access to PPE, including masks.

Across the Jackson metro over the weekend, many grocery stores were in the uneasy rhythm of the shelter-in-place order. Signs announced responsible guidelines for distancing. Cashiers sheltered behind plastic shields separating the customers in their lines. Easter felt more like Halloween, with shoppers and workers alike clad in varieties of masks as they went about their day.

But the insufficiency of our public spaces for a crisis like this was also clear. At the Ridgeland Costco, opened just in time for its first global pandemic, an effective system for moving customers through the checkout bank kept shoppers distant and protected. But everywhere else in the store where queues inevitably formed, people packed shoulder to shoulder, with little ability to stay more separate.

Bennett has a mask, and Shopper’s Value provides its employees with latex gloves. “I’m less at risk than the cashiers are, but I’m out there on the aisles while customers are in the store, and I have to just hope they practice social distancing,” Bennett said. He acknowledged that most customers and employees are trying their best. But, he said, a certain degree of exposure is ultimately unavoidable.

At the Jackson Kroger, the tight aisles are often filled with patrons. Nationally, the grocery chain announced April 7 that it was limiting its stores to 50% of their regular capacity. The impact was hard to see in the Jackson store the next weekend. Painter’s masks, surgical gear and colorful scarves aside, it felt much like any shopping day.

Bennett, who does not have health insurance, said the federal guarantee that it would cover COVID-19 treatment even for the uninsured was a weight off his shoulders. But he admitted his lack of coverage was a gamble he continually has to take.

“The likelihood of me needing health insurance is pretty slim. But if I were to come down with something serious….” Bennett paused for a moment, doing the same hurried risk analysis as the other 27 million uninsured Americans. “I’m not really sure what I’d do,” he said.

For Mississippi’s wage workers, the daily challenges of employment are only half the story. For many of those furloughed or suffering hour reductions, the prospect of losing their homes and utilities is real.

Gov. Tate Reeves ordered an eviction freeze for Mississippi as part of the executive order establishing shelter-in-place statewide, which began April 3 and is scheduled to last until April 20. But Mississippi Public Services Commissioner Brandon Presley talked in an interview of at least a dozen reports of eviction notices or attempts at backdoor evictions through utility shutoffs, a practice Presley stressed violates the executive order. 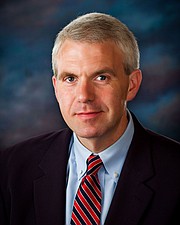 “Ninety-nine percent of landlords are doing the right thing,” Presley said. But the Northern District commissioner, who describes himself as an “FDR Democrat,” said the federal government must do more to protect tenants in the new recession.

“There has to be a federal intervention with money. The truth is if you don’t do that you risk taking a roof over people’s heads. (Homeowners) have the ability to defer or forbear mortgage and utility payments,” Presley said. He suggested that the federal government should extend similar protections to the roughly 43 million Americans who rent.

Further federal investment, Presley said, should aim squarely at small businesses and average workers. “First and foremost, there needs to be a strong focus on Main Street,” he said. “For our small-business owners who are employers, to keep people on the payroll. For there to be a further recognition of the people who have held together the knitting of our economy.”

That means holding corporations accountable, especially those who manage massive utilities, Presley said. He cited the case of Tippah County in north Mississippi, which lost its AT&T service beginning on March 3 as a scheduled, but unannounced, upgrade came online.

“We’re in the middle of a pandemic,” Presley said. “This has been an unmitigated mess.”

The commissioner said AT&T had missed deadline after deadline for restoring service to Tippah County—calling it the inevitable consequence of the government’s lax hand with regulation.

“The market has failed rural America. The rush to deregulation has turned the telecommunications industry into the Wild, Wild West. There are basic functions of telecommunications that should be regulated. They should be required to let customers know if they’re going to take towers out of service,” he said.

The Jackson Free Press could not reach AT&T’s regional office by press time.

Many workers feared speaking on the record for this story, concerned about losing their jobs during a global pandemic, as a potentially devastating recession kicks in.

A singular understanding tied most of the interviews together—that business as usual has left the working class exposed to immense danger in this time of crisis.

“It just feels as if we have been thrown away, written off as the ones who will have to get sick—and then they move in the next employee, until they get sick, and so on. Where is our safety net? Do we shut up and take our fate? I’m terrified of what my future holds and the future of my family,” one worker said on background.

In his role as president of the National Association of Regulatory Utility Commissioners, Presley plans to create a COVID-19 task force to explore these questions: “We’re going to jot down lessons learned. One thing we already know is that minimum-wage workers hold this economy together. But how do we make sure those workers are taken care of and ensure that we are recognizing their worth?” He said the first step was a broader respect for labor.

“Anybody who says there’s not been a tendency to look down on blue-collar workers is living in an alternate reality,” Presley insisted. “Once you have that respect, everything flows from that.”

Senate Minority Leader Derrick Simmons, D-Greenville, pointed out the lack of institutional support for workers. “Mississippi needs to address the lack of protection for workers beyond this crisis. We need a separate and distinct Department of Labor to show the state’s commitment to fair and balanced labor laws,” he said, stressing that Mississippi is one of the only states in the nation without its own labor department.

Alex Marten agrees. “This is going to require a society-wide change. My fear is that by the time this is over and done with, we’ll wipe the sweat from our brow, say ‘Whew, that was close,’ and move on without making changes that will prevent the next disaster,” the nurse said.