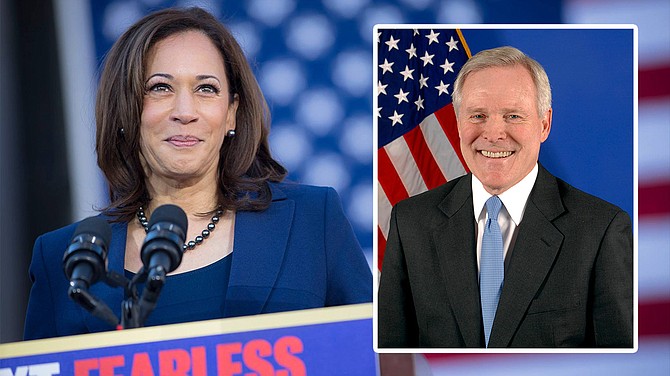 'Don't Let Anybody Take Our Flag From Us,' Kamala Harris Tells New Orleans

"Don't let anybody take our flag from us," Democratic U.S. Sen. Kamala Harris urged an audience in New Orleans on Friday, Aug. 3.

Former Mississippi Gov. Ray Mabus endorsed U.S. Sen. Kamala Harris in the Democratic Party’s presidential primary in a Friday statement that her campaign sent out to members of the press.

“Kamala Harris is fully prepared to be our next commander-in-chief,” said Mabus, who also served as secretary of the Navy under President Barack Obama from 2009 to 2017. “In this world in flux, she has the necessary command of foreign affairs, toughness of character, and judgment in decision-making to keep Americans safe and handle the difficult challenges on the world stage. I am entirely confident in her capability and proudly endorse her to serve as our commander-in-chief.”

Harris, who represents California in the U.S. Senate, praised Mabus in turn.

"Secretary Mabus has been a champion for the people of Mississippi and our service members, and I am honored to have his support," Harris said in the Sept. 6 press release. "There is no greater responsibility than serving as commander-in-chief, and as president, I will always protect our country, stand up for our interests and alliances, and keep Americans safe."

Mabus, a Starkville native, served as the Democratic governor of Mississippi from 1988 to 1992, during which time he signed the largest teacher pay raise in the nation, but lost a re-election bid to Kirk Fordice—a businessman who in 1992 became Mississippi’s first Republican governor since 1876. After losing re-election, Mabus served as U.S. ambassador to Saudi Arabia under President Bill Clinton before working in the Obama administration.

Mabus: Transgender Military Ban ‘Not the Way to Treat Patriots’

Earlier this year, Mabus criticized the Trump administration for reinstituting the ban on transgender people serving in the military.

“This notion that all of this work's been done and these people felt safe as transgender, felt safe coming out, joining the military, and then suddenly the rug gets jerked out from under—it's not the way to treat patriots, it's not the way to build a great military force either," Mabus said in a CNN podcast in January.

Harris has also criticized the ban.

“On day one, Kamala will reverse President Trump’s immoral ban on transgender servicemembers in the Armed Forces,” the LGBTQ+ Equality page of her campaign website reads.

Harris, who previously served as her state’s attorney general, is among candidates who will be on the stage at the next Democratic debate on Sept. 12. Also on the stage will be former U.S. Vice President Joe Biden, whom she memorably criticized in the first debate earlier this summer for his praise of segregationist politicians, including ones from Mississippi.

‘That Little Girl Was Me’

Earlier this year, Biden told stories about how well he got along with segregationists U.S. senators from Mississippi, like Jim Eastland and John Stennis, who were still in the Senate when he was there. During the Civil Rights Movement and in the years after, both staunchly opposed integration. In the 1970s, Biden worked with Stennis and other segregationists like Thurmond and Sen. Jim Eastland, Mississippi's other U.S. senator then, to fight a key segregation program, busing, which the government used to send children across district lines to make schools more integrated.

Harris took aim at Biden, not only for his recent praise for the "civility" that segregationists like Eastland and former U.S. Sen. Herman Talmadge of Georgia showed him, but for his efforts to kill the program that integrated her school.

During the first debate in June, Harris, who is African American, took aim at Biden, not only for lauding the "civility" that he said segregationists like Eastland showed him, but for his efforts to kill the program that integrated her school.

"Vice President Biden, I do not believe you are a racist, and I agree with you, when you commit yourself to the importance of finding common ground," Harris said. "But I also believe—and it's personal—it was actually hurtful to hear you talk about the reputations of two United States senators who built their reputations and career on the segregation of race in this country."

It was not only his praise of segregationists that bothered her, though, Harris said, but his efforts to end the very program that ensured her an integrated school experience.

"There was a little girl in California who was bused to school. That little girl was me," she said.

Biden deflected the criticism, claiming that his opposition to busing was about federally mandated busing. That decision, he said, should have been left up to states and local governments as it was in Berkley—not enforced by the federal government.

"The fact is that, in terms of busing, the busing, I never—you would have been able to go to school the same exact way because it was a local decision made by your city council," Biden said. "That's fine. That's one of the things I argued for. We should be breaking down these lines."

That "local control" argument both invoked the segregationists' "state's rights" argument—the racist Citizens' Council's logo was designed around the words "Racial Integrity" and "State's Rights"—even as it recalled Eastland's opposition to "forced busing ordered by federal courts," and Stennis' suggestion, in a 1973 letter to a constituent, that busing only existed to satisfy technocrats in the nation's capital.

"I am opposed to the busing of schoolchildren for the sole purpose of overcoming racial imbalance," Stennis wrote in that letter. "This unreasonable busing is injurious to our school children and only benefits some Washington socio-political statistician."

Stennis' opposition to busing was indicative of the mood in Deep South states, which showed no desire to implement busing on their own terms—a point Harris made during the June debate.

"There are moments in history where states fail to support the civil rights of people," she said.

In recent years, Mabus has been increasingly outspoken about Mississippi’s history of racism and the need for change. 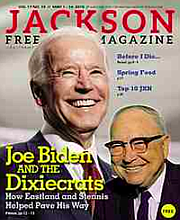 During his early years as a U.S. senator, Joe Biden counted Mississippi segregationist Sens. Jim Eastland and John Stennis as his mentors.

After the “Unite the Right” rally brought neo-Nazis and neo-Confederates to Charlottesville, Va., where they rioted and one murdered anti-racism activist Heather Heyer in August 2017, Mabus wrote an essay for TIME magazine. In it, he called on Americans to remove “symbols of unrepentant oppression,” like the Confederate monuments across that still stand in public places across the South, “now and forever.”

“Removing these memorials and symbols, like the Confederate battle flag element that remains sadly and shamefully part of my home state’s flag, is not an effort to sanitize our history nor erase some part of our culture,” Mabus wrote. “In fact, the myths of ‘magnolias and moonlight,’ of the benevolent slave owner (an oxymoron if there ever was one), the romantic narratives of ‘The Lost Cause’ and the distortions of Reconstruction are the real efforts to sanitize and erase. Confederates made perfectly clear that the ‘states’ rights’ they sought to preserve was the right to own slaves.”

Last year, Harris paid a visit to Mississippi in order to endorse former U.S. Secretary of Agriculture Mike Epsy in his U.S. Senate race against Republican Sen. Cindy Hyde-Smith. Espy, who in 1986 became Mississippi African American congressman since the Civil War, lost the 2018 election, but came closer to winning that Mississippi U.S. Senate seat than any Democrat since Stennis won his last re-election to it in 1982.

Mississippi will hold its Democratic presidential primary on March 10, 2020.