'Don't Let Anybody Take Our Flag From Us,' Kamala Harris Tells Netroots 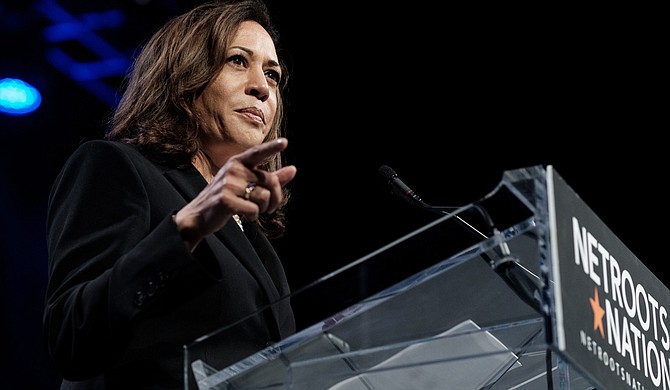 NEW ORLEANS—"Don't let anybody take our flag from us," Democratic U.S. Sen. Kamala Harris urged an audience in New Orleans on Friday, Aug. 3. The California senator was pushing back against what she sees as a tendency on the left to cede patriotism to opponents on the right.

She was speaking at the 2018 gathering of Netroots Nation, a conference that draws liberal and progressive bloggers, politicians and grassroots activists together in a different city each year.

Referring to Russia's attack on the 2016 election as an act of "cyber warfare," Harris urged Americans to "speak truth" about hate in America. "Check it out: The Russians know that truth," Harris said. "The Russians know racism and other forms of hate have always been America's Achilles heel, and we need to deal with that weakness."

Still, she insisted, America is "better than this," referring to Trump administration policies such as its ban on immigration from majority Muslim countries, its rollback of rights for LGBT people and its immigrant family separation policy. Harris, who in 2016 became only the second African American woman ever elected to serve in the U.S. Senate, appealed to the Deep South city's past to make her case.

"I know we are better than this, because 13 years ago, New Orleans was underwater, and the initial response was appalling," she said. "Katrina exposed a shocking level of racism and neglect but, ultimately, Americans of every race, religion and background came together to bring this city back to life."

"I know we are better than this because, less than 60 years ago, about four miles up the road, Ruby Bridges needed federal marshals to escort her to school," Harris said, referring to the civil rights activist who, as a 6-year-old child, faced abuse and harassment when she became one of the first African American children to attend an integrated school in New Orleans.

"And yet today, Mayor Latoya Cantrell is the first woman—and first black woman—in history to lead this city. That's our American identity."

New Orleans was once home to the largest slave trade in the country, she said, "but today you heard from Cory Booker and Kamala Harris—two members of the U.S. Senate." That, she said, is "what makes this a fight born out of love of country."

Booker, a Democrat from New Jersey, spoke earlier that day. He, like Harris, is one of just three currently serving U.S. senators who are African American. The other is Sen. Tim Scott, a Republican from South Carolina.

"I'm a big believer that if America—if this country hasn't broken your heart, then you don't love her enough," Booker said. "Because there are things that are savagely wrong in this country. There's a normalcy of injustice that we've accepted."

Democratic Sen. Elizabeth Warren of Massachusetts—another potential 2020 presidential candidate—also spoke at the conference. In her address, she focused on economic injustice and the ways in which she believes racism is used to perpetuate it.

"Trump and his pals tell working people a story about what's wrong with their lives," Warren said. However, those stories are not about rising health-care costs, student-loan debt or lobbyists writing tax bills, she added. "In Trump's story, the problem is other working people—people who are black or brown, or were born somewhere else, or don't worship the same, dress the same or talk the same."

Pitting working people against one another, Warren said, "might be the one thing Donald Trump is good at—that and kissing up to two-bit dictators."

"It all adds up to the same thing: the politics of division," Warren said. "Politics that tries to pit black working people against white working people so they won't band together."

Other speakers at Netroots Nation 2018 included Cynthia Nixon, who is running for governor of New York, and Alexandria Ocasio-Cortez, a Democratic socialist from New York who defeated Rep. Joe Crowley, the fourth-highest ranking Democrat in the House of Representatives, in a Democratic primary for his seat in June.

Netroots Nation, which was Aug. 2 through Aug. 4, had 3,000 attendees, the organizers estimate. The first event was in Las Vegas in 2006.