The Thin Line Between LGBT and Racist Hate 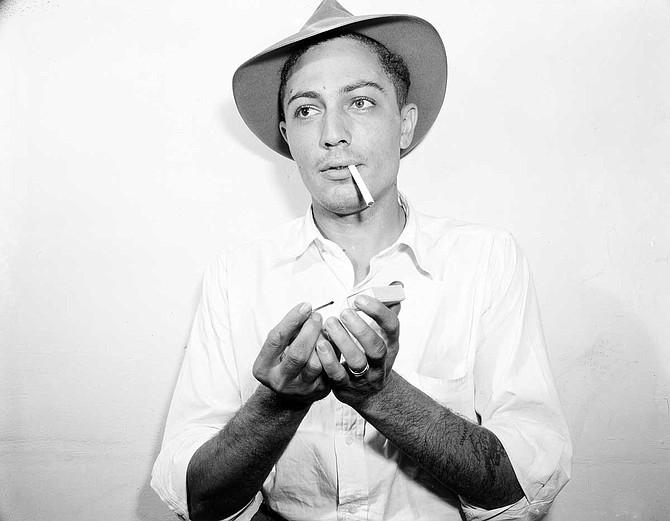 Davis Knight, a 23-year-old Navy veteran, lights a cigarette in Ellisville, Miss., on Dec. 19, 1948. Knight was convicted and sentenced to five years in prison on a charge that he committed miscegenation by marrying a white woman. Until 1967, Mississippi law prohibited interracial marriages involving a white person and anyone with one-eighth or more black heritage. The state contended that Knight’s great grandmother was black. (AP Photo)

One night in December 1948, Ellisville, Miss., resident Davis Knight learned that he was apparently black by law when Jones County police showed up at his farm home to arrest him for the crime of marrying Junie Lee Spradley, a blonde-haired, blue-eyed white woman. Police, the Jackson Advocate reported at the time, "charged (Davis) with being a negro and marrying a white woman" and sentenced the World War II veteran to five years in prison.

Davis Knight's arrest happened only after an angry relative dug into their family genealogy; the police claimed it was proof that his 1946 marriage violated the state's miscegenation laws, which prohibited marriages between a white person and a person with "one eighth Negro blood," the Jackson Advocate reported in 1949.

A local court convicted Knight, who up until that point had believed himself to be white, sentencing him to five years in prison. Enforcement of such strict "racial integrity" laws, even against people who looked as white as any garden-variety Mississippi governor of the time and had no idea of any different ancestry, was common in the early decades of the 20th century in the South and other parts of the country.

Davis Knight, it turned out, was the great-great grandson of Newt and Rachel Knight. During the Civil War, Newt Knight famously deserted the Confederate Army and led Jones County in seceding from the Confederacy, creating the "The Free State of Jones," the title of a later book about him and, most recently, a feature film. After the war, Newt had children and eventually entered into a common-law marriage with Rachel, who was once his grandfather's slave.

In the decades since, echoes of the State of Mississippi's discriminatory history have continued to make themselves heard, sometimes in the form of so-called "religious liberty" laws that give businesses and organization wide berth to invoke their religion to justify discriminating against LGBT people. In 2014, when the Mississippi Legislature passed and Gov. Phil Bryant signed Senate Bill 2681, known as the "Mississippi Religious Freedom Restoration Act," opponents warned that it could embolden business owners to use their religion to justify discriminating against more than just LGBT people, perhaps returning to last century's racial-integrity fervor.

"I don't think it could just be the LGBT community, because the language (in SB 2681) is so broad," C.J. Rhodes, Rhodes told the Jackson Free Press in 2014 while the Legislature was still debating that bill with black legislators standing up emotionally against the bill and for the rights of Mississippi's LGBT citizens. Rhodes is the pastor of Mount Helm Baptist Church, a historically black church that slaves of First Baptist Church worshipers started near downtown Jackson.

"It could be LGBTQ, it could be Mexicans, it could be a whole host of things," Rhodes said then. "The question is: Does the State have the right to allow private businesses to make these sort of sweeping generalizations? How do you determine someone's religious belief or not?"

'I Mean, Our Christian Faith'

LaKambria Welch, a resident of the small north Mississippi town, posted a video she had filmed while confronting a wedding venue owner in late August. Welch, who is African American, wanted to know why the owner had suddenly cancelled plans for her brother and his fiancee, a white woman, to have their wedding ceremony there.

"They were in contact with the venue all week and were set to meet. The owner took a look at my brother's fiancee's page and wrote her back to say they won't be able to get married there because of her beliefs," Welch told the Jackson Free Press in early September.

After the owners did not respond to a Facebook message from her mother, Welch said, she and her mother went to the venue themselves to confront them. Inside, Boone's Camp Event Hall, owner Donna Russell was vacuuming.

"She didn't acknowledge me at first," Welch said. "She then came over, and I began telling her I was his sister and asked what her beliefs were. That's where the video started."

"First of all, we don't do gay weddings or mixed race, because of our Christian race—I mean, our Christian belief," Russell tells Welch at the start of the video.

"So, what in the Bible tells you that—?" Welch begins to ask.

"Well, I don't want to argue my faith," Russell says.

"We just don't participate," Russell says back to Welch.

The video drew widespread condemnation—and even an official rebuke from the town itself, including Booneville's mayor and board of aldermen. When reached by the Jackson Free Press, David Russell just said, "no comment."

On Sept. 25, Rhodes said that the incident affirmed his 2014 concerns.

"Based on the very fact that the law was cited, I think, speaks to what some would call the unintended consequences of the legislation and why a wide array of persons who differ on the theology of sexuality and sexual ethics and other issues were ultimately against the law," he said. "Because ... basically, the law said I can say to anyone, 'This is my conscience, and this is how I feel about it,' and that basically leaves no recourse for civil action."

Days after the video went viral in early September, drawing angry comments from across the country, Donna Russell made a new post on the business' Facebook page. After studying the Bible and consulting with her pastor, she wrote, she realized that she was wrong and that the Bible never forbade interracial marriage.

"As a child growing up, our racial boundaries that were unstated were of staying in your own race," she wrote in early September. "This was never spoken, but it was an understood subject."

Russell wrote that she "came to the conclusion" that "what I had thought to be supported by the Bible was incorrect." Despite her epiphany on relationships, though, she implied that she still would not allow gay couples to use her venue to marry.

The incident sparked a renewed conversation about SB 2681 and House Bill 1523—a more explicitly discriminatory law Bryant signed in 2016 known as the "Religious Liberties Accommodation Act." It specifically provides protections to business owners when it comes to beliefs about same-sex marriage and gender identity.

In 2016, the North Carolina-based Campaign for Southern Equality sued the State of Mississippi over HB 1523. After a federal judge in Jackson initially ruled that the law was unconstitutional, though, the 5th U.S. Circuit Court of Appeals in New Orleans reversed his ruling.

The LGBT plaintiffs, the conservative appeals court said, did not have standing to bring a case because the law had not been invoked to deny them services.

CSE Executive Director Jasmine Beach-Ferrara, who is also a United Church of Christ minister, told the Jackson Free Press on Sept. 26 that the incident in Booneville "illustrates exactly what's wrong with laws like HB 1523."

"These laws have a teaching effect, and they unfortunately can embolden people and make them feel like their personal biases or prejudices allow them to deny services to folks," Beach-Ferrara said.

"Now, HB 1523 doesn't apply exactly to the scenario here, because the focus is on sexuality and gender identity and not race, but at the same time I think it's absolutely relevant to look at an incident like this as an example of what happens when a state sends a really clear message over the years that it's okay to deny services to people.

Beach-Ferrara said CSE "regularly" hears stories from people in Mississippi who say they have been denied services on the basis of their sexuality or gender identity. CSE has not ruled out bringing another case if a plaintiff comes forward and they think they could win, Beach-Ferrara said.

"We encourage people, if they do have an experience like this, to reach out to the Campaign for Southern Equality or to any one of the other advocacy groups, like the ACLU, Lambda Legal, any of the other groups, and report what has happened. ... We certainly would take a long, hard look at whether there were grounds for a strong lawsuit and what that would mean for plaintiffs moving forward."

CSE would proceed "judiciously" with any potential lawsuit, though, she said. Since 2016, President Donald Trump has altered the makeup of the U.S. Supreme Court in significant ways.

Justice Anthony Kennedy, who was the key vote and author on all of the court's major pro-gay rights rulings, stepped down last year, and Trump replaced him with Brett Kavanaugh, a conservative who has yet to show his hand on LGBT issues.

October 8 could prove pivotal, as the Supreme Court is set to hear cases over whether or not an employer can fire someone simply on the basis of their sexual orientation or gender identity.

"The Supreme Court, of course, has an incredibly significant LGBT case in front of it in just a few weeks. ... We'll probably have a clearer indication as that case moves forward on what the current climate is like on the Supreme Court around LGBTQ issues," Beach-Ferrara said.

For now, she is watching actions at the federal level that she says are designed to introduce the essence of Mississippi's laws—and a 2016 North Carolina law that banned transgender people from using bathrooms that correlate with their gender identity—into federal law.

"Our hypothesis along with many others all along was that what was happening in Mississippi and North Carolina in 2016 was a laboratory of sorts for what far-right strategists wanted to ultimately implement federally," Beach-Ferrara said. "So that's where I think the shifts have been when you look at the attempts to roll back LGBTQ civil rights in various ways."