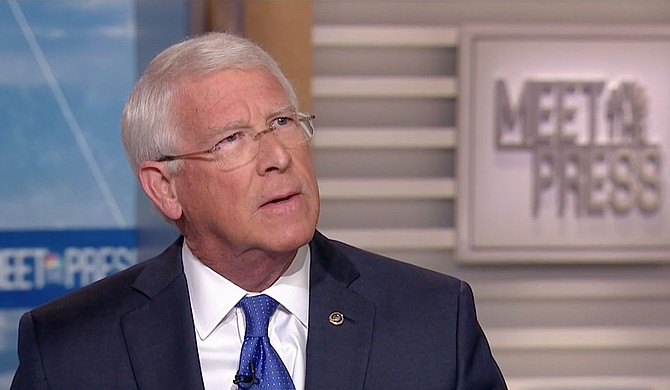 U.S. Sen. Roger Wicker, R-Miss., claimed he saw "no proof" of Trump's wrongdoing and suggested Ukraine may have interfered in the 2016 election, echoing a Russian propaganda campaign to shift blame for its own efforts to help Donald Trump and hurt Hillary Clinton in the 2016 election. Photo courtesy Meet the Press/NBC News

Mississippi's senior U.S. senator, Roger Wicker, claimed in an interview on Sunday that he saw no "direct evidence" that President Donald Trump did anything wrong when he pressured Ukraine to open investigations into former U.S. Vice President Joe Biden.

The Republican senator, who is a senior member of the Senate Armed Services Committee, also helped boost a Russian-planted conspiracy theory despite warnings from U.S. intelligence officials.

At one point, Todd played a clip in which Wicker, then a congressman, argued fiercely for Democratic President Bill Clinton's impeachment after he lied under oath about having a sexual relationship with Monica Lewinsky, then a White House intern.

"The rule of law means that the commander-in-chief of our armed forces could not be held to a lower standard than his subordinates," Wicker said in a 1998 clip. "The rule of law is more important than the tenure of office of any official."

Wicker told Todd that the evidence against Clinton "was overwhelming," but in the case of an impeachment inquiry against a president of his own party, Wicker said he is "nowhere close to seeing ... proof." If the U.S. House votes to impeach Trump, the Senate will hold a trial in which Wicker and his fellow senators will serve as jurors, deciding whether or not to ultimately remove the president from office.

In congressional hearings over the past two weeks, current and former members of the Trump administration described a plot in which the U.S. president and his allies sought to hold up congressionally approved military aid unless Ukraine's new president, Volodymyr Zelensky, agreed to publicly announce two sham investigations.

The U.S. has been providing Ukraine with significant military assistance since Russian President Vladimir Putin invaded the country in 2014, seizing the Crimea region. He has continued to launch attacks on the country ever since.

One of the investigations Trump wanted was intended to cast doubt on whether or not former U.S. Vice President Joe Biden might be tied to corrupt dealings in Ukraine through Burisma, a company whose board his son, Hunter Biden, sat on. The other would-be investigation was meant to bolster Russia's false narrative that Ukraine, not Russia, interfered in the 2016 U.S. elections—and that they did so to help Hillary Clinton, not Trump.

Trump released the Ukraine aid in September, but only after the news of his attempts to pressure Ukraine into helping him broke. Initially, Republicans argued that it would only have been wrong if there was a "quid pro quo," which is Latin for, "a favor for a favor." Then, the White House released its incomplete transcript of Trump's July 25 phone call with Zelensky—which Trump's staff had hidden on a secret service after determining it could be damaging.

In the semi-transcript, Zelensky brings up his country's need for the aid.

"I would like you to do us a favor, though," Trump said, explaining the two investigations he wanted Ukraine's new president to launch.

Trump backers claimed the call was about corruption in Ukraine in general—an assertion that subsequent facts have undermined.

"I think the phone call...was legitimately about corruption in Ukraine," Wicker told Todd on Sunday, though Trump never mentions any other instances of "corruption" in the transcript.

'I Think He's Telling the Truth'

Wicker pointed out that Zelensky has denied that he felt "pressured" to initiate the investigations. Reports since, though, indicate he had planned to publicly launch investigations until the story broke.

"Zelensky said he was under no pressure to do anything. He didn't even know the aid was being held up," Wicker told Todd.

But Laura Cooper, a top Pentagon official, undermined the claim that Zelensky did not the aid was being held up in her Nov. 20 testimony. She told Congress that Ukraine sent emails to her staff indicating they knew the aid was being withheld on July 25—the same day as the infamous phone call.

On Meet the Press, Todd pushed back when Wicker appealed to Zelensky's claim of "no pressure." "You don't think he feels pressure ... not to disagree with Trump in public?" Todd asked.

"I think he's telling the truth," Wicker responded. "If you're going to try to remove the president of the United States from office, you need solid evidence. And the other person on the other side of this so-called quid pro quo denies a quid pro quo."

Testimony from multiple officials in the Trump administration contradicted that testimony, too, though. Gordan Sondland, Trump's ambassador to the European Union, testified that he worked with Trump's personal attorney, former New York City Mayor Rudy Giuliani, to pressure Ukraine into launching the investigations at Trump's direction.

"I know that members of this committee have frequently framed these complicated issues in the form of a simple question: Was there a 'quid pro quo?' As I testified previously, with regard to the requested White House call and White House meeting, the answer is yes," he said. 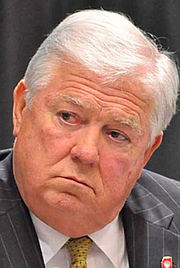 Donna Ladd and Nick Judin wrote an explainer on the Mississippi connections to the Trump impeachment inquiry.

'We're Running Out of Time to Stop Them'

Fiona Hill, another impeachment witness and a former Trump foreign policy adviser on Russia and Europe, warned members of Congress last week against repeating claims that Ukraine, not Russia, hacked the Democratic National Committee in 2016 and sought to change the outcome of the election.

"Right now, Russia's security services and their proxies have geared up to repeat their interference," Hill said. "We are running out of time to stop them. In the course of this investigation, I would ask that you please not promote politically driven falsehoods that so clearly advance Russian interests."

Trump has repeated that claim anyway, as have some Republicans in Congress.

Republicans in Congress have tried to muddy the waters on foreign election interference by pointing to anti-Trump comments individuals tied to the Ukrainian government made in 2016. That, Todd pointed out on Sunday, is not the same as a foreign government systemically attacking a country's election system, as America's intelligence agencies agree Russia did in 2016 with its hacking and targeting of Americans voters with fake news stories and ads on social media.

"I understand there were individual Ukrainians. ... Is that the same as the Russian government ordering a full-fledged interference?" Todd asked Wicker.

"I'm concerned about both," Wicker said.

Last week, The New York Times reported that U.S. intelligence officials informed senators in recent weeks about Russian efforts to target Americans with disinformation, including the false claim that Ukraine interfered in the 2016 election.

"American intelligence officials informed senators and their aides in recent weeks that Russia had engaged in a yearslong campaign to essentially frame Ukraine as responsible for Moscow's own hacking of the 2016 election, according to three American officials," the Times' Julian E. Barnes and Matthew Rosenberg reported.

"The revelations demonstrate Russia's persistence in trying to sow discord among its adversaries — and show that the Kremlin apparently succeeded, as unfounded claims about Ukrainian interference seeped into Republican talking points."

Wicker told Todd he was not among the senators who had been briefed on the matter.

At an economic forum in Moscow last week, Putin expressed pleasure at the growing chorus of Republicans in the U.S. who are pinning the blame on Ukraine.

"Thank God no one is accusing us of interfering in the U.S. elections anymore," the Associated Press reported him saying. "Now they're accusing Ukraine."