Mike Espy to Trump: 'This Isn't a Lynching, Mr. President' 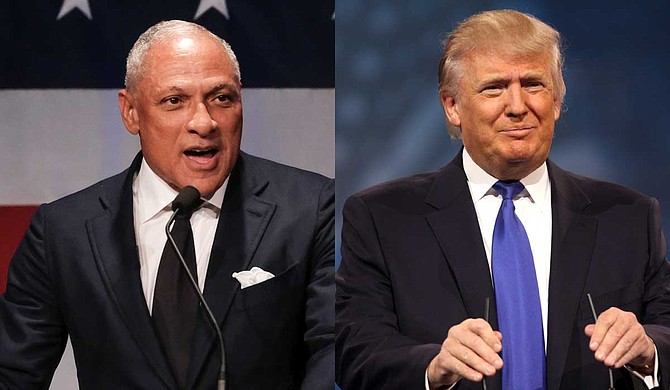 President Donald Trump's claim that he is the victim of "a lynching" in the ongoing impeachment inquiry is "disgraceful" and akin to the U.S. Sen. Cindy Hyde-Smith's "public hanging" remark last year, Democrat Mike Espy said in an email to supporters on Tuesday. Espy, who made history in 1986 when he became the first black congressman elected from Mississippi since the 1800s, challenged Trump-devotee Hyde-Smith in last year's special election.

On Tuesday morning, Trump wrongly claimed that congressional Democrats are impeaching him "without due process or fairness or any legal rights." In fact, Congress is following the constitutionally prescribed process for impeaching a president.

"All Republicans must remember what they are witnessing here—a lynching," Trump tweeted. "But we will WIN!"

For African Americans, such cavalier talk of "lynching" recalls the country's dark history.

"With our nation's sordid history of lynchings that took the lives of countless African Americans, especially here in the state of Mississippi, it is absolutely offensive and flat-out disrespectful for the man occupying the highest office in our country to make such a careless comparison," Espy wrote.

Last year, Hyde-Smith started a national firestorm after telling one supporter she liked him so much that "if he invited me to a public hanging, I'd be on the front row," first reported on in The Bayou Brief by independent Louisiana journalist Lamar White Jr.

Hyde-Smith refused to comment on the video for over a week, but finally offered a pre-written milquetoast apology at the Nov. 20 debate with Espy, only to cast the blame on him and accuse him of twisting her words for "nothing but personal and political gain." The Jackson Free Press later reported that she attended a segregation academy that opened in 1970 to avoid school integration.

In his email, Espy noted that Trump's comment came "less than one year after Cindy Hyde-Smith made a disturbing comment" about public hangings. He also noted that Trump showed up for the opening of Mississippi's Civil Rights Museum in Jackson in 2017.

"In that museum is a searing exhibit about lynchings. Every single person who was lynched in Mississippi—black or white—is listed by year with their alleged 'crime'—from registering to vote to disrespecting a white person," Espy wrote. "This is not a lynching, Mr. President. Since Trump visited our exhibit, he should know that an impeachment investigation could never be compared to a 'lynching.'"

The State With the Most Lynching

Between 1877 and 1950, Mississippi had the highest number of lynchings of African Americans of any states in the United States, just as the state had been the wealthiest from slavery before the Civil War, and then later passed the most onerous laws after Reconstruction to stop black people from voting and gain equal rights in the state.

Across Mississippi, 654 lynchings were reported in that period, including two in Lee County, where Hyde-Smith made her comments. Lynchings—extrajudicial mob justice used to intimidate African Americans—were usually done by hanging, often in front of crowds of joyous whites who even mailed postcards with lynching photographs to friends and family.

"This is the legislative branch of government doing their Constitutional duty to hold the executive branch accountable to the rule of law," Espy wrote. "To draw such comparisons makes my stomach turn. As I said about Senator Hyde-Smith's comments, these words are reprehensible and have no place in our country."

Espy is planning to challenge Hyde-Smith in a rematch in 2020. Jackson Free Press Editor Donna Ladd reported earlier this month that he plans to launch a full-fledged campaign sometime after Mississippi's 2019 statewide elections next month.

Congress is currently holding hearings to probe the president's efforts to hold U.S. aid to Ukraine hostage unless that country's president would agree to launch an investigation into former Vice President Joe Biden's son's business dealings in Ukraine. There is no evidence that Hunter Biden was involved in illegal activity.

In hearings today, the top American diplomat to Ukraine, Bill Taylor, testified that Trump demanded a quid pro quo from Ukraine's president, Volodymyr Zelensky, in exchange for a meeting at the White House and for military aid that Congress has already approved. He said Trump wanted to put Zelensky in "a public box" by requiring him to publicly agree to the investigations before they would release the money or invite him to the White House.

Last week, Trump Chief of Staff Mick Mulvaney admitted to a quid pro quo, telling reporters it is normal and to "get over it," before walking those comments back.