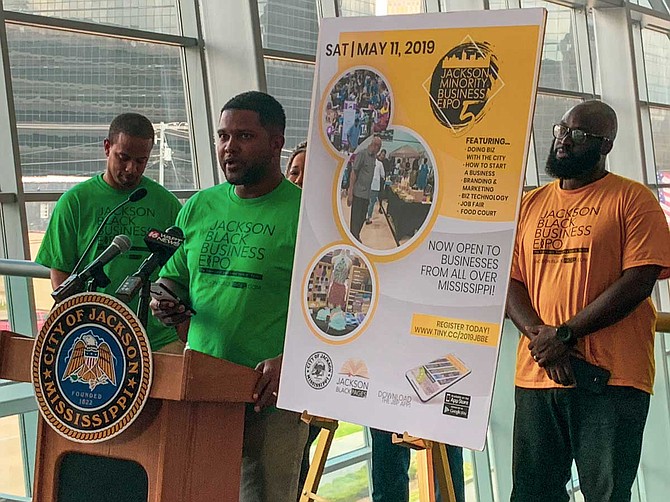 JACKSON — When Chuck Patterson learned that his friends planned to boycott the Black Friday sales events in Jackson in 2012, he thought that energy could be put to better use.

"Why are we taking money away from businesses? I thought instead we could take more care with where we put our dollars and fix these problems," Patterson told the Jackson Free Press on Tuesday.

Late that year, he founded the Jackson Black Pages, which connects Jacksonians with black-owned local businesses through its website so they can put money back into their local communities.

As he got more involved, Patterson said he realized that African Americans are vastly underrepresented among the city's businessowners. Black-owned businesses, he said, account for just a small portion of Jackson businesses even though more than 80 percent of the city's residents are African American.

Now, after five years spent supporting African American businesses in the city, the organization will host its fifth annual Minority Business Expo on May 11. In the past, organizers welcomed only businesses from the Jackson metro area. This year, for the first time, the expo will host black-owned businesses from all across Mississippi.

At a press conference announcing the 2019 expo on Tuesday, Jackson Mayor Chokwe Antar Lumumba shared Patterson's concern about the lack of black-owned jobs and businesses.

"If you have a city full of left-handed people, then you need more left-handed jobs," Lumumba said.

Since its inaugural event in 2013, the Jackson Minority Business Expo has brought more than 150 brick-and-mortar establishments and online businesses to consumers in the city. Last year, the Jackson Black Pages released an app that helps consumers identify black-owned businesses that can support their needs.

This year, the City of Jackson is assisting the Jackson Black Pages by allowing them to use the Jackson Convention Complex for the May 11 expo, an action that makes it possible for the group to host businesses and consumers from across the state. Jackson officials and special guests will also lead seminar sessions on topics such as "Doing Business with the City," "Utilizing Tech for your Business" and "How to Start Your Small Business."

In addition, the Jackson Black Pages is planning future job fairs to get potential entrepreneurs involved with business in Jackson.

"There were two very important things we discovered when we were looking at this program," Mukesh Kumar, director of city planning and economic development for the City of Jackson, said at the March 26 press conference.. "The first was that the entrepreneurial propensity rate is higher among African American entrepreneurs. This is not only true about the City of Jackson, but also nationwide. However, we also discovered that, in the African American community, sole proprietary businesses dominate rather than limited liability partnerships."

A single owner can form a sole proprietorship with minimal paperwork and no state registration costs, but that owner is responsible for all debts and any legal liabilities incurred. With a limited liability partnership, on the other hand, multiple owners are shielded from legal liabilities and monetary obligations, but the registration fees to start one up can be expensive. That creates not only an extra hurdle to starting one up, but can make it difficult for black-owned businesses that start as sole proprietorships to transition into multi-owner businesses.

Backers of the Jackson Minority Business Expo hope it will help connect entrepreneurs who can work together to overcome those and other challenges.

"By fostering the entrepreneurial propensity that we know already exists, we hope to build the bridges needed to overcome the structural problems that are keeping these business from growing," Kumar said.

"This is not only a significant event that supports and encourages black businesses, but it is also an event that encourages the prosperity of our entire economy," he said. "If an economy cannot support 85 percent of the population, then it is one that needs community support and reform."

Interested vendors may find more information here. Email the Jackson Black Pages at [email protected] or call Mike Davis at the City of Jackson Office of Economic Development at 601-960-1638 for sponsorship information.

The Jackson Minority Business Expo will be held at the Jackson Convention Complex (105 E. Pascagoula St.) on May 11 from noon to 5 p.m.