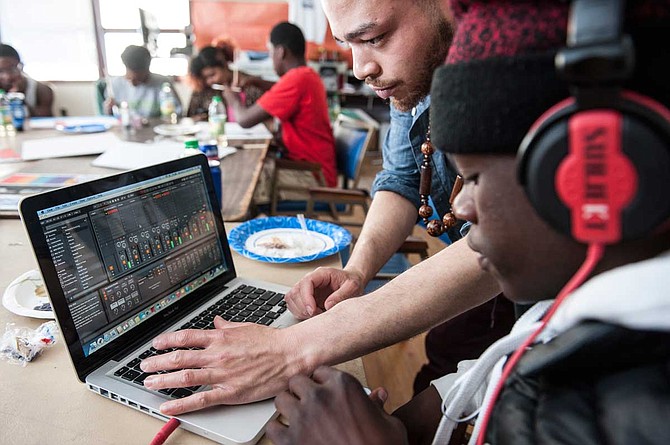 The Jackson Free Press visited Creative Justice, an art-based alternative program in King County, Wash., in 2016. It allows young people to express themselves creatively at the direction of an artist mentor. Photo courtesy Timothy Augero

JACKSON — A record 459 children were in custody in 2015 in Hancock County on Mississippi's Gulf Coast—the highest number of children in detention facilities per capita in the state.

The explosion of locked-up minors in the state's southernmost county, which includes county seat Bay St. Louis, led to a task force to examine what was happening inside the youth-court system there. The Hancock County Youth Court Task Force discovered a number of problems in the youth-court process that are prevalent around the state as well. They include a lack of legal representation for children and their parents; the lack of treatment for substance abuse or addiction; and the significant financial burden that ongoing drug screenings place on families.

The epidemic of locking up children included far more than Hancock County, however. A Jackson Free Press investigative series on juvenile crime detention in the state found that, in 2015, 18,674 young people from age 7 to 18 were referred to a youth court for a delinquent act. Referrers included law enforcement, family, schools, socials services, medical or mental professionals, and Department of Youth Services or court representative.

A JFP team reported then that some of the children referred to the youth court returned more than once, resulting in 13,388 cases that passed before a youth court or similar set-up in Mississippi during 2015, annual reports from the Division of Youth Services in the Department of Human Services confirmed.

The Mississippi Legislature now may take some steps toward addressing concerns about youth courts and juvenile detention centers in the state, if several bills the House of Representatives passed become law. The fate of those bills, which all passed with large majorities in that chamber, now rests with the Senate.

House Bill 1067 calls for increased accountability for youth courts, where judges sometimes make decisions that do not follow current evidence-based practices on juvenile detention and treatment, warehousing young people in youth detention rather than helping them. The legislation would allow members of other courts to sit in and evaluate youth-court proceedings. The bill also calls for youth courts to submit monthly data to the Administrative Office of Courts such as the number of pending cases, the number of children moved from parental custody, and the number of children placed in the custody of the State of Mississippi each month.

David Baria served as the chairman of the Hancock County Youth Court Task Force in 2015.

Baria, the principal author of House Bill 1067, hopes that a renewed process of information sharing and accountability will help the state achieve a more uniform, accountable juvenile court.

"The system that we have established through statute is secretive, and there are good reasons for that, including to protect the children and also to protect parents who are accused of doing something to a child or neglecting a child and may or may not have done things that are alleged," Baria said. "But right now it's not a court of record, and we think it's a good idea to have lawyers aside from those representing parties to be able to observe, just to make sure there's accountability in the system, and I think most judges would be fine."

House Bill 666 would raise the minimum age for detention from 10 years old to 12.

The Oakley Youth Development Center, formerly called a "training school," is a juvenile corrections facility that had more than its fair share of reported malpractice over the years. In 2008, the U.S. Department of Justice filed a lawsuit against the State of Mississippi in response to horrendous conditions and practices at both Oakley and Columbia, the training school for girls that closed in 2008 after reports of harmful practices.

In 2003, a Department of Justice report described abuse at Columbia, where young girls said they were shackled in ways that caused them pain and left scars. Girls with mental illnesses did not get appropriate psychological care. Guards locked naked, suicidal girls into the "dark room," which was windowless room with only a floor drain for them to urinate or defecate into. They also had to take their meals in the pitch-black room with the drain in the middle.

Joy Hogge, the executive director of Families as Allies, told the Jackson Free Press that, although these bills are a good start toward addressing displaced and incarcerated children, they still reflect a less-than-ideal model for transforming delinquents into productive members of society.

"The best thing for children ... is being able to live at home, in the community, with their family," Hogge said Wednesday, referring to the evidence-based move toward providing "delinquent" young people the held they need without locking them away, potentially exacerbating their problems.

Families as Allies advocates for the same model that spurred Bear Atwood, then director of the Mississippi Youth Justice Project, to call for the closure of institutions like Oakley all together years ago.

The State of New York adopted this model when the "Close to Home" law passed, moving all New York City young people out of state prisons and incorporating them instead into local programs. Instead of punishment, these programs focus on helping underprivileged youth address the substance abuse and socialization problems that got them in trouble with the law in the first place. After the New York Legislature passed the "Close to Home Act," juvenile arrest rates declined twice as fast.

"It's still scary that we're talking about children who are 12 years old still going into a (detention facility)," Hogge said. "I think there's a part of us that wishes for a place that could make people better. There are places where people can get acute symptoms treated, but there's not a magical place that makes people better ... (To develop) we all need other people, and we all need the normal things that all people need."

"I understand the idea of people having to face consequences for what they have done," Hogge added. "But there are probably other consequences rooted in things like restorative justice that are more likely to teach kids what they need to know and help them stay in the community with the people they need to make things right with."

"Restorative justice" refers to an approach to crime that emphasizes rehabilitation for offenders and reconciliation with victims and communities.

The Jackson Free Press visited a variety of facilities in 2016 around the country, including in Seattle, that embraced alternative approaches to juvenile detention. Read more at jacksonfreepress.com/preventingviolence.