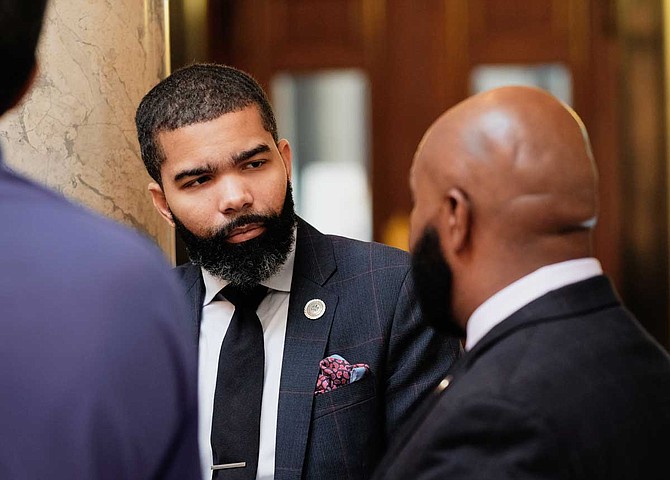 Mayor Chokwe Antar Lumumba hopes Jackson's adoption of the StarChase system, which allows police cruisers to shoot GPS tracking devices that stick to fleeing suspects' vehicles, will cut down on the number of dangerous high-speed police chases in the city. Photo by Ashton Pittman.

JACKSON — Milinda Clark cranked up her beige 1990s Nissan Altima one cool morning in February 2012. The social worker, who was in her late 30s, had already attended the early service at Pinelake Church in Flowood. Now, she was heading back to pick up her two children from Sunday School. However, she never arrived.

Around seven miles from the church, Ridgeland Police began chasing after a gray Grand Marquis. The Reservoir Patrol and Rankin County Sheriff's deputies eventually joined as the suspect sped down Spillway Road at about 90 miles per hour. The officers chased the suspect all the way onto Highway 25 in Flowood, the car whizzing past the church where Clark's children waited for their mom.

"Going to kill somebody, might want to back off of him," said a voice over the police scanner.

Seconds later, the gray Grand Marquis, which police believed was carrying stolen groceries, crashed into the driver's side door of Clark's car at nearly 100 miles per hour. She died later that day.

Since the Jackson Free Press reported on that story seven years ago, high-speed police chases in the Jackson metro area have claimed more innocent lives and injured more bystanders, and the city has struggled to find a solution. But on Tuesday, March 19, 2019, Jackson Mayor Chokwe Antar Lumumba pitched one to the City Council: outfitting JPD police cruisers with mounted launchers so officers can fire GPS tracking devices that stick like darts to fleeing automobiles.

At the March 19 meeting, the council approved $18,141.43 to equip three cruisers with the StarChase Pursuit Management System, which uses lasers to target and shoot the miniature GPS tag at suspects' vehicles up to 20 yards away. Instead of engaging in dangerous high-speed chases, law enforcement can hold off on their pursuit and monitor the vehicles' movements and location in real-time through a secure web portal.

The launcher, which is fashioned onto the cruiser's grill, holds two cylindrical devices, each of which has a sponge soaked in a heat-sensitive adhesive. From the time the launcher heats and fires the GPS tag, the devices' batteries last anywhere from 24 to 48 hours, allowing officers to wait until the suspect stops before they approach the vehicle. The devices are reusable and simply require a new adhesive after each use.

Cities like Los Angeles have used StarChase for more than a decade, but the system's high cost has prevented smaller cities from adopting it as quickly; each unit costs $5,500 to purchase and install.

Lumumba explained the benefits of the system to the council members on Tuesday.

"This technology allows the city to enter into conversations with our neighboring municipalities to utilize this type of technology rather than chasing citizens in an unsafe manner," Lumumba said.

He was referring to a number of cases, like Clark's, in which the Madison, Ridgeland and Clinton police departments were involved in high-speed pursuits into Jackson that ended in innocent bystanders' death or injury.

'I Wish We Never Had to Pursue a Car'

Three years ago, on March 21, 2016, a car with three suspected burglars drove into oncoming traffic in west Jackson and struck 34-year-old Lonnie Blue Jr.'s car head- on, killing him. The suspects were fleeing Clinton police, who had followed them as they crossed into the city.

Surrounding law enforcement agencies have expressed openness to equipping their own cruisers with StarChase technology. After Clark's death, Ridgeland Police Chief Jimmy Houston said in a 2012 Jackson Free Press interview that, despite the high cost, he wished his department could install the launchers on their cruisers.

"I wish we never had to pursue a car," he said at the time.

Even with StarChase launchers, though, concerns remain about an outside police forces' ability to effectively communicate with JPD about pursuits.

"Our pursuits have been really dangerous with outside agencies because of issues in communication," JPD Officer Vincent Grizzell told the council at Tuesday's meeting. "By the time another department calls in to report to our dispatch a car going over 100 miles per hour ... the offenders are already passed us."

City leaders and JPD hope to spearhead the use of GPS pursuit-tracking technology in the area, and to collaborate with surrounding police departments to decrease the potential for fatalities resulting from high-speed pursuits and inefficient communication.

"Once we get other police departments on board, if they are pursuing a car into our area, we can go to the mapping system in the cars as well as at dispatch to see where the launcher has alerted everyone," Grizzell said to the council.

Councilwoman Virgi Lindsay invoked a personal story as she voiced her support for the motion.

"My daughter was caught up in a horrible high-speed chase a number of years ago, and I have never seen her so terrified," she said. "She thought she might lose her life. This is an issue that affects people from all walks of life."

In other cities, law enforcement's use of GPS tracking technology has already raised concerns among privacy advocates. One controversial case began in 2005 when the FBI obtained a Washington, D.C., warrant to affix a GPS device to D.C. club owner Antoine James' vehicle, whom they believed was running a large cocaine ring in the city. Using information gathered during 28 days of tracking, law enforcement arrested him, and a court sentenced him to life in prison.

There was a problem, though: While the FBI obtained the warrant in D.C., the agency installed the device in Maryland, where it did not have a warrant to do so.

Jones' attorney claimed that the GPS was an infringement of his client's Fourth Amendment Rights, which protects the "right of the people to be secure in their persons, houses, papers, and effects, against unreasonable searches and seizures."

In the U.S. Supreme Court's 2012 ruling of United States v. Jones, the court sided with Jones, finding that law enforcement's use of the GPS tracker amounted to "the government physically (occupying) private property for the purpose of obtaining information."

In a 2015 statement, StarChase defended the constitutionality of its technology, arguing that the 2012 ruling was narrowly focused on Jones' specific case. The court, it noted, did not rule that police needed a warrant to use a GPS tracker, leaving open the possibility that the tracker could be legal in cases where there was "probable cause."

"Even though Jones makes clear that attaching the StarChase GPS device and collecting information from it constitutes a 'search,' the use of the StarChase Pursuit Management System is reasonable under the Fourth Amendment because the officers have probable cause to believe the vehicle they are tracking is being used in the commission or active escape from a crime," the statement reads. "The StarChase Pursuit Management System is deployed in exigent circumstances, primarily the high speed pursuit, stolen vehicle or other in progress felony. Such use under Jones remains constitutional."

In a 2014 blog post on the American Civil Liberties Union's website, ACLU Senior Policy Analyst Jay Stanley wrote that he did not "see any problem with this technology," so long as it is used "only in police chases that commence when a police officer has the equivalent of probable cause of wrongdoing (even if just fleeing a temporary detention like a traffic stop) and do not have time to get a warrant."

Police would also need to apprehend the suspect as soon as they can do so safely, unlike the 28-day period when the FBI tracked Jones, and remove the device once they apprehended the suspect, Stanley wrote. Otherwise, they would need to obtain a warrant, he added.

"And on the other side of the equation, this has the potential to obviate the need for high-speed pursuits by police cars through cities and towns, which are very dangerous and kill hundreds each year, with a third or more of those fatalities being innocent bystanders," he wrote—a quote that StarChase features prominently on its website.

Still, the technology cannot not prevent all high-speed chases. In 2016, the National Institute of Justice partnered with Johns Hopkins University to conduct a one-year study on how the StarChase system was working at 10 police departments across the country, including ones in Texas, Virginia, Arizona and California. The institute's findings, published in July 2017, found that the StarChase system's effectiveness depended on individual departments' policies and methods.

"As a tool for providing options in a pursuit situation, the effectiveness of StarChase appears directly related to an agency's pursuit policy and technology implementation decisions," the report reads. "Implementing a technology such as StarChase does not mean that an agency will never need to pursue a suspect vehicle at high speeds, but it serves as one strategy to help reduce the number of such pursuits and promote increased safety for officers and the public."